Do my support teams wear my uniform?

Do my support teams wear my uniform?

Some are obvious, e.g. tripod MG, mortar battery etc. as they are part of my battalion. However, can someone confirm for Fall of France era German infantry whether my leIG18 and PAK 36 crew wear infantry uniforms and shoulderboards? How about if I take an sdkfz 221, do I have to paint the crew in pansy pink and black, or can they have a proper uniform too?
Thanks
Top

You made me curious, as this is my primary period too, and I have some gun crews in progress that I briefly doubted!

A quick search of period photographs confirms the artillerists wore the same uniform as the infantry (red corps color as artillery), while the armored car crews wore panzer black, and their corps color would be golden-yellow (reconnaissance) instead of pink (armored).

I'll note that the recce crews did conduct scout on foot sometimes, for which they may have worn coats or coveralls instead (you can see them in a couple of the photos). 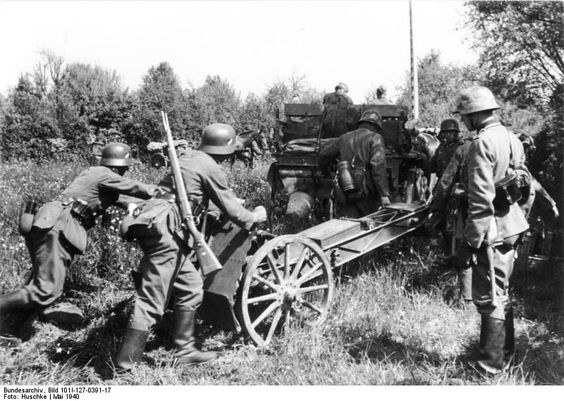 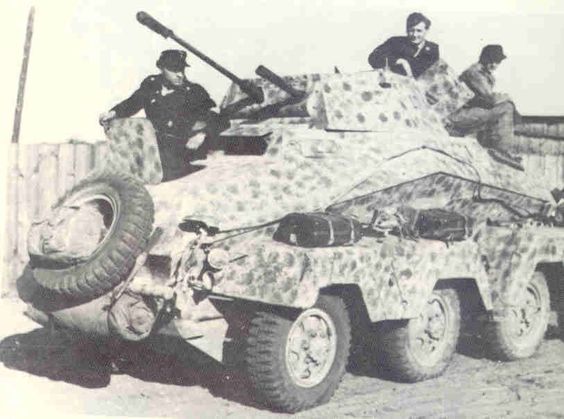 Edit: Doesn't let me post more than two urls, so here are the ones with the best contrast.
Top

If the 221 was from an Aufklarungs Abteilung they would have golden yellow piping.

However, specialist troop facing colours did change so, for example, motorcycle units could be white, pink or golden yellow ...).

Ah, that's interesting, I didn't know that troops in the same role would be distinguished differently based on their parent formation. Thanks!
Top

Levi the Ox wrote: ↑
Tue Mar 24, 2020 7:08 pm
Ah, that's interesting, I didn't know that troops in the same role would be distinguished differently based on their parent formation. Thanks!

Well, it's not really the same role. An infantry gun, an AT gun, and a howitzer are all doing quite different things.
Tiny Hordes
Top

The LeIG18 crew will be part of the infantry regiment (or schutzen unit) and so wear the same distinctions (White and pink respectively).

The schutzen wore white same as ordinary infantry as far as I can recall. Later (don't know when exactly) panzergrenadiers were given a nasty shade of medium green.

The PAK36 crew will again be part of the infantry formation unless they are from the Panzerjager/Panzerabwehr Abteilung when they would be pink.

If part of the infantry white, but if part of, say, a recon or cavalry unit, they would wear golden-yellow

the armored car crews wore panzer black, and their corps color would be golden-yellow (reconnaissance) instead of pink (armored).

If the 221 was from an Aufklarungs Abteilung they would have golden yellow piping.

Only if their unit had a cavalry tradition. Otherwise they wore pink.
Motorcyclists would wear the same colour as the battalion or regiment they were part of. Independent motorcycle battalions, however, had their own colour - a fairly hideous 'copper-brown'.
Top

Schutzen waffenfarbe seem to be very complex - one posting referred to an order of July 31st 1938 stipulating that Schutzen Rifle Regiments assigned to armored formations would wear pink. Schutzen units still assigned to Light Divisions continued to wear golden yellow. The same commentator noted that all motorized Schutzen Infantry units assigned to Light Divisions and Panzer formations after 19 September 1939 were to be wearing the Wiesengrun but these regulations or directives were not always followed.

Yes, indeed. The problem is that the waffenfarbe (and indeed all other insignia) had as much to do with history and traditions as it did with functionality. Without understanding the history, this can lead to all sorts of confusion - for example the Danzig Police and their ADGZ armoured cars being almost universally identified as SS because of their 'death's head' insignia - in fact the insignia of the Danzig hussar regiment whose traditions the police had inherited. Off course Germany isn't the only country to do this, rather it is a common feature of all armed forces. By and large, the benefits of tradition for morale and esprit de corps are deemed to outweigh the needs of standardisation! To whit:

And this makes complete sense, because the rifle regiments of the leichte divisions were nominally cavalry formations using cavalry unit designations (abteilung, schwadron) and ranks. They also had slightly different organisations with, for example rifle companies organised according to KStN 1112 and 1115 (Panzer divisions 1-3 had them organised according to KStN 1114). The most significant difference from a wargaming perspective is that the 'cavalry' rifle squads had 2 lmg rather than one. Just to make it even more interesting, the 4 and 5 Panzer Division shared the KStN 1115-based regimental organisation with Lei Divs 2 and 4 albeit, 'sfar as I know, not the waffenfarbe and unit/rank terms.
Top