Loughton Strike Force will be putting on an O Group game covering the German attacks against Pavlov's House, in Stalingrad 1942.

It will cover a slice of the battlefield from the Volga all the way up to the Germans lines, where the battle itself will take place.
This is the mill area, where the Russian rear lines and reserves will be, and is the ultimate German objective. Pavlov's House is centre left, next to the park and children's play area! The German start line is the building and walled area beyound the tram and downed Heinkel. 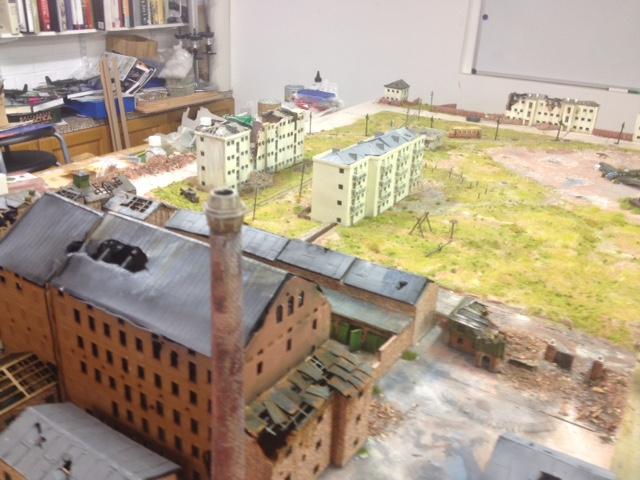 The game will have a separate rear board section covering the Russian reserves as they struggle over the Volga to reinforce Stalingrad. The O Group battle will take place across the park, Pavlov's House and the mill factory complex.

So, come along to Salute and try your hand with O Group and see if you can succeed in driving the Russians into the Volga, or hold out against the invaders and save Mother Russia!

WOW! That is a spectacular looking table!! "Oh to be in England now that April's (almost) there..."
Capt Fortier

It's 15mm and even at this scale the mill complex is still huge!

We intend to have a section of the mill on fire - and will be inserting "glowing lamp" feature to illuminate the inside to represent flames!

Bloomin heck Dave - you need to make video of that