So, i got dragged into the glorious 15th century again, this time on the tabletop instead of as living history! Bought myself some perry mercenaries and light cavalry and had a go at making a small skirmishing force. I have to say i'm a bit tempted by the sharpe practice war of the roses game, but for now i think it'll be lion rampant as that's what's being played locally.
Anyway, I decided I wanted some NPC's/characterfull models to add as vignettes to my force, so i had a go at converting up a noblemen in civilian clothing. Perfect to represent a major, taxcollector, messenger,....

That is an impressive conversion - and looks spot on for what you were after. Would be interested to see what your force looks like overall.
Capt Fortier

here are some other pictures of the other models i've made. i've tried to uparmour almost all of my infantry and cavalry. for the most part this meant sculpting bevors and breastplates. it was my first time trying it but overall i'm very pleased!

Obviously some models had to be bog standard too!

I'm looking forward to seeing this project pan out! I've pondering converting either Dux or SP2 for slightly earlier conflicts as well, bringing it back to around late HYW.
Top

I must say i've been tempted to dig into the sharp practice war pf the roses edition published in the 2013 summer special! Shame it doesn't contain some sort of list building option as at first sight some force morale values or the likes might work nicely!(assuming SP has that too)
Top

I made some progress today! adfter all, what's the point in having a fortified towerhouse if you can't lay siege to it?

it took some testing, but here'w how i made the whole thing.
Supplies needed:
-1 earclean thingy (for the barrel)
-some thing cardboard
-some balsa wood
-superglue
-scissors+shark knife
-greenstuff

Frst you cut the ear clean thingy to the correct size for your barrel.
Then you take a strip of thin cardboard and roll it around the barrel, it won't fold perfectly so take your time with this.
Once folded, flatten it again and use some scissors to cut thin strips of the cardboard. these will be the rings for the barrel.
Now drop a bit of superglue on the barrel, put the strip on that spot and use a scalpel of something to bend it around the barrel again. coat it over with superglue to it all hardens.
Repeat this step until you have anoug rings.
Now decide on how you want to do the body of the gun.
Do you want a field gun or a bombard type. I went for a culivrine look and so tried to replicate that body. I carved it from some balsa wood and then coated it in superglue to strengthen it.

Then I tried for about half an hour to make some wheels, failed horribly and almost trew it away.
Then my eye saw the following gun on google images. still a field gun type, but with legs instead of wheels! 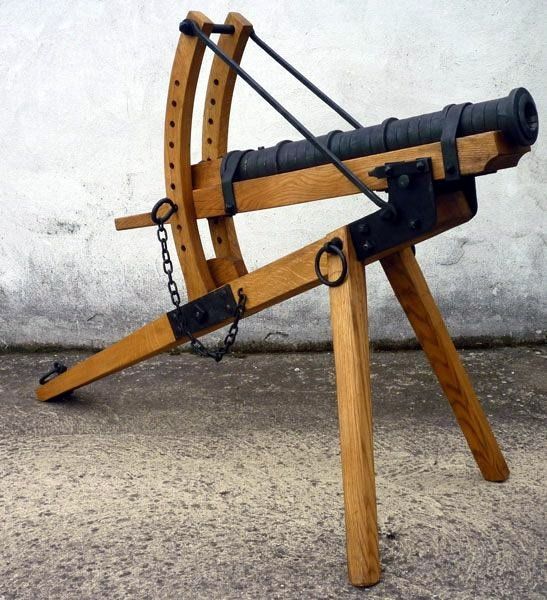 Problem solved, I cut some balsa legs and added them. then came the fine detailing, which i did with greenstuff to represent the metal plates that keep the wooden frame together.
Top

Nice work I think you have got the armour color spot on to my eye.
Top

They have come on splendidly! Lovely work. Though a few of the men on the front left look at risk of running into something other than the enemy. How do they see? Perhaps from the Zaphod Beeblebrox school of fear management?
Capt Fortier

lol, through a visor you actually have quite a great view! and it definetly helps when you're in the front rank and arrows are coming down on you! speaking from experience!
Top
Post Reply
22 posts