At one point when organising my Polish I thought I had "enough" Cavalry as I misread the number of figures to a base and what it represents. Essentially a company. So I was merrily content with 8 figures. Not so. At 1:20 (and yes I know the rules don't require that level of detail) I should be fielding 40 (at full strength) in Four Squadrons.

I am not rebasing my figures so my 15mm Light Cavalry will be 30x30mm and two figures per base, making two bases per company and four per squadron. 16 bases for the Regiment so 32 Figures. This seems quite large compared to the examples in the rules and narrative that accompanies certain sections. So my column of companies would be 4 figures (and should be 5), Squadrons of 8 and should be 10.

What am I missing (I severely over thought Light Infantry)

Possibly the assumption that cavalry units would be operating at near 80% of full strength. That would rarely be the case once a campaign had started. Particularly Light Cavalry whose squadrons or troops could often be on detached duty and not present with the parent regiment.

Also not all the units you see on the tabletop are necessarily a full regiment.

In addition players often don’t represent cavalry at the same figure to men ratio as infantry for pragmatic reasons: they are more expensive and harder to paint. So are content to field smaller cavalry units.

In GDA your 640(32 figure) strong unit is a Large cavalry unit. You could half that and still count as fielding a standard unit or fight as two half regiments.

As GDA works on bases 3, 4, and 5 bases, the number of figures is perhaps irrelevant apart from looking good! I use 40x25mm bases with 3 cavalry figures per base, thus a standard regiment is 12 figures.
Top

12 figures sounds like a good number — divisible by 6, 4, 3 and 2, so extremely flexible when building formations.

Now the real problem is, are you forming them in three squadrons or two? If in three, which was the norm, then they should be in ranks of 4; if in two, then in ranks of 6. Problem is, of course, most folk would field them in two ranks of six, i.e. an unhistorical two squadrons. On longer campaigns two squadrons was as much as many regiments could manage, so that could be your excuse...
Top

It’s an interesting question and once again their is no definitive answer. It’s always what you are comfortable with and can manage easily. The greatest aspect of our wonderful wargaming hobby is the diversity of research, collecting, painting, modelling, basing and then, hopefully, playing a game. The latter point is my true focus this year and beyond!

For my part, cavalry units of 12 figures and below are small, 13-32 standard and anything else large. That’s a heck of a lot of metal/plastic and may need a psychological evaluation of myself at some point in the future.

Whatever you choose I think the points made by AD, Dave and Contrarius above are all spot on and especially C’s point on ranks and formations. That’s critical in reflecting Napoleonic cavalry doctrine of the time.

Best of luck in your endeavours

Thank you for all your responses. So I think my issue is one of "space" that a unit occupies. My 15mm collection has been ported over from NAP POW which I never played but based for, but hasn't been on the table for over 20 years. My current Cavalry units (Uhlans, Chasseurs and Hussars are all based as 8 figure units on four bases) 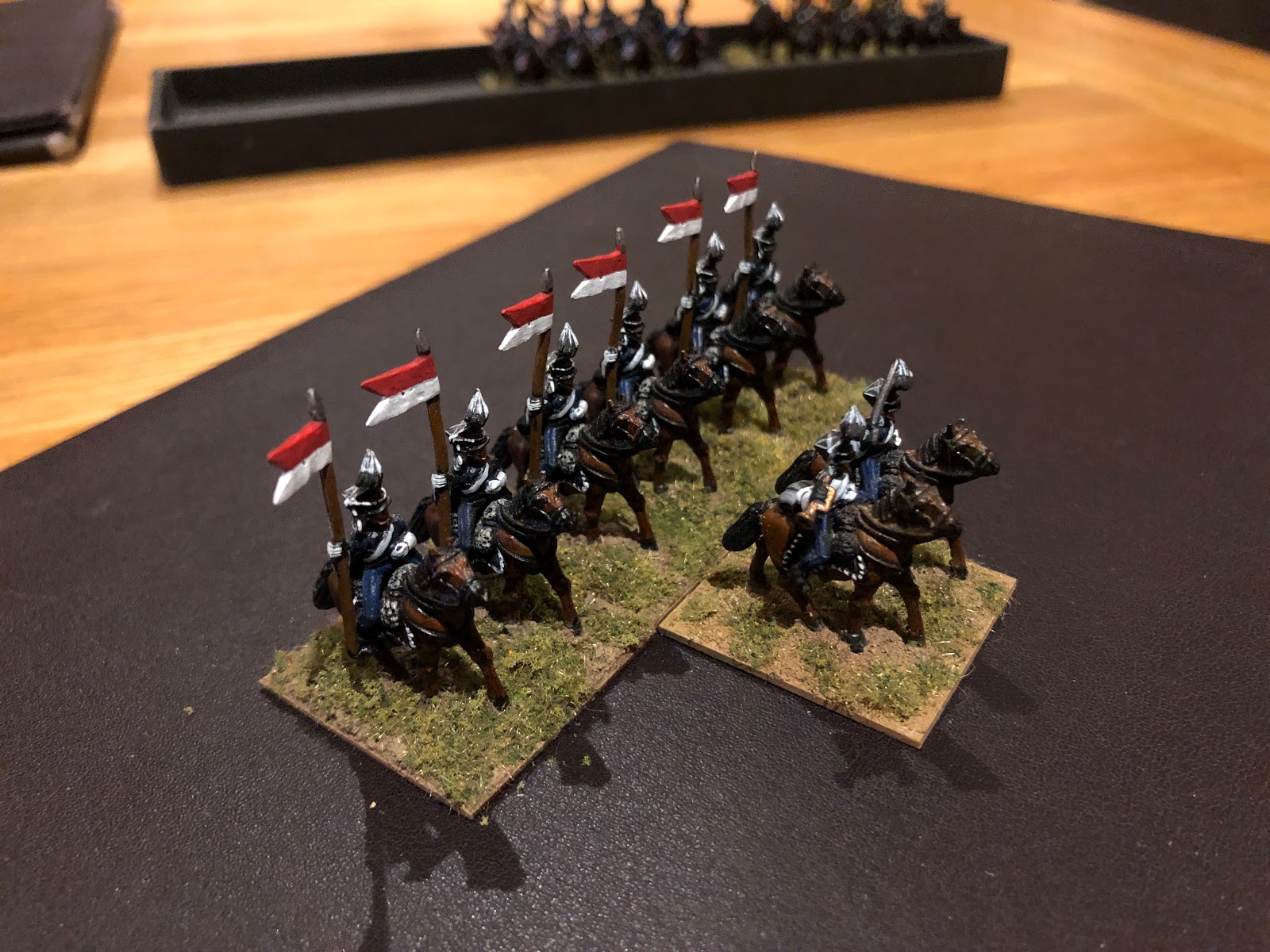 GDA really doesn't help because it assumes you have something already, which I don't in any real quantity but an now just getting into the swing of painting. The relationship between footprint of Infantry, Cavalry and Artillery is important.

I can't find the page where 3/4/5 is used but take the guidance from those who have played it a lot and will probably find it now that it has been pointed out but that isn't consistent with how I read the designers descriptions (2 squadrons minimum and split into companies (unless going for pure squadron bases) or the possible formations listed (column of companies for example).

To me this implied 4/6/8 bases going small/med/large regardless of figures per base (but gives examples which would extrapolate from a minimum of 8 Figs and a max of 32). As I said I am not going to rebase so will leave them as is and use a base of two figures being a company for the time being, with two bases a squadron. This scratches my itch without having to go down the massive purchase of figures I was worried about
Last edited by Traffic on Mon Jun 01, 2020 4:04 pm, edited 1 time in total.
Top

So, are you using 2 bases (four figs) per squadron?

DB,
Thanks, I am using 2 figure bases because that is what I came into GDA with, not necessarily by choice. When I first read the description I missed the section on companies. So I thought that the four bases equated to 4 squadrons (8 figures) and would be enough but the "Regiment" didn't look right against the infantry battalion and artillery batteries.

You have given me a couple of options and the second one is where I thought I had to start with. The other respondents have given a couple of ideas as well. As I have to paint the missing figures regardless they are staying on two figure bases, each squadron being 2 x (2) to begin with but I did think about how the elite companies might look as a modelling option and that would probably be a choice if I go for squadrons of 4 x (2) later on.

And, all depends on my opponent who has his based for several rule sets none of which match mine.

where in the rules does it refer to this please
Top

Thought I'd seen this somewhere too but having just done a PDF search of the rules, using all manner of terms, the only reference I found to 3,4 & 5 bases were the number of skirmish bases a small, medium and large brigade can put out. But I'm sure I've seen reference to 3,4 & 5 base battalion sizes somewhere as that's what I'm doing (largely as a result of having to base figures for dual use with Black Powder).
Top
Post Reply
12 posts