Just getting into Napoleonic after a good 15 years off doing other things. Two quick topics please

I cannot work out skirmish basing. The rules talk about basing not being important as long as both sides are similar. Fine with that concept. BUT, what does that mean for skirmishers which are in one rank and have a specific size mentioned and then have a "must" statement that they have to be at least half a base apart from each other (unless on bespoke bases). 1:33 or 1:20 ratios clearly matter. And what is a bespoke base?

Next one is regarding "Brigades" What happens to those units which had 3 battalion regiments with two regiments being pair into a brigade (Duchy of Warsaw 1812 for example). Do I replace "Brigade" with my Regimental structure ? The alternative would seem to penalise larger formations
Top

Hi Traffic,
Welcome to the Forum and to the General D’Armee rules.

The intention is that a unit operating in a skirmish line should occupy roughly 1.5x to 2x the frontage of that same unit in close order line. Unless you have separate skirmisher bases the simplest way to do that is to spread out the bases leaving a gap between them equivalent to at least half a base width up to a full base width. So a 6 base unit would cover the equivalent of between 8.5-11 bases frontage when deployed into skirmish line. The exact amount doesn’t matter much as long as you and your opponent can be clear what formation they are in.

Bespoke stands simply means creating separate wider stands to deploy your skirmish troops on using a wider frontage per figure as described in the section on base sizes.

In my case my 28mm French Line infantry are usually based as 4 figures in 2 ranks on a 40x40mm base. However, my light company is based as 2 bases of 2 figures on a 40x20 base as are my French Legere. This allows me to place them in 2 ranks (40x40mm) when in Close Order or place them in a single rank thus occupying 80x20mm or double their normal frontage when adopting a Skirmish Formation.

It’s up to you and your opponent when drawing up the scenario you want to play to decide how to represent the historic OOB. It is not unusual to have 5-6 battalion brigades as you can seen from the Introductory Scenario in Appendix A, but if you prefer to operate at the Regimental level with 3 battalions that’s fine. However, you may find that such small brigades are a bit fragile and risk becoming Demoralised quite quickly. I find that 4-5 battalion brigades to be a reasonable average, 6 battalions is fine but I wouldn’t go larger than that.

Thank you both for the responses.

The Brigade/Regiment one I will have to get some game time in and see how it plays out. I hadn't picked up on the brittleness issue.

Skirmish, I am even more confused. I get both your points that a skirmish base should cover 1.5/2 of the frontage. We are using 15mm figures on 40mm x 30mm deep bases with 8 figures a base. A battalion generates a base but doesn't replace a base from the parent unit. A base can have as many or as few figures as you want. So what is the rationale of the distances per figure (12-15mm), this would appear to provide the "bespoke" bases rather than a mechanism by which a standard base is used with the "gap" recommendation? I am using separate skirmish bases because we hadn't decided on 1:20/1:33 and it made sense to better utilise the volitigeurs already in my pile while I cracked on with the painting the bulk of the line infantry. And it would appear that putting that on 40mm bases just creates the need to have a gap? 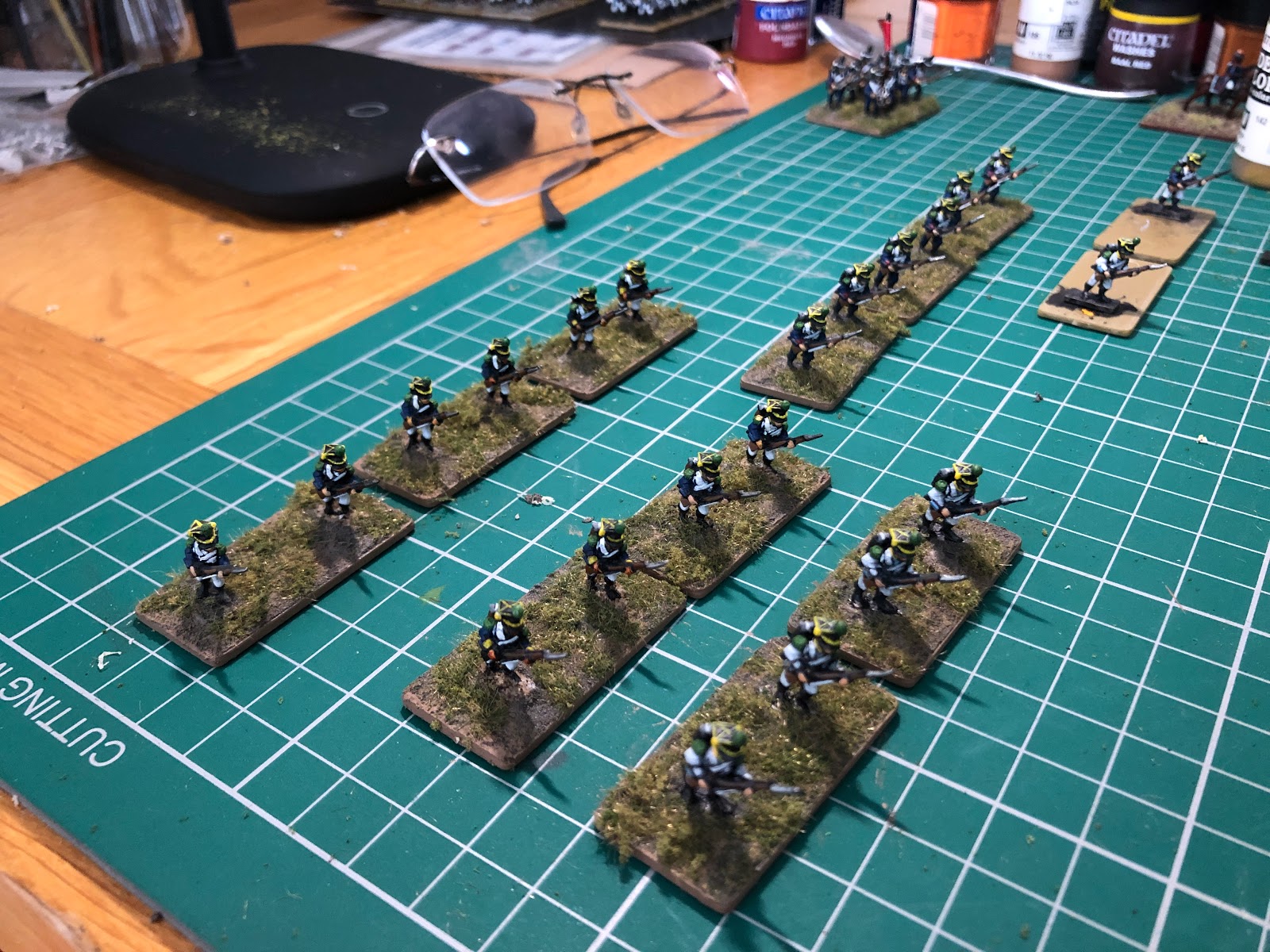 Am I overthinking this ?
Top

Yes I think you are overthinking this and causing yourself unnecessary grief.

If your standard base is 40mm wide then 2 of your Voltigeur bases placed side by side without a gap will work fine as a Skirmish base. Job done.

Ignore the 12-15mm per figure point, that’s just a suggestion by the author which you don’t need to follow. Your basing will work as it is.

Thanks,
that is clear and is where I think that this was going to end up

The third battalion in a Duchy of Warsaw infantry regiment was often poorly supplied or even late for the campaign. After the first few actions it would also typically be pillaged to make up manpower in the first two battalions. Not unreasonable to my mind to make it smaller than the other two battalions (standard vs large, or small vs standard), and/or a morale grade lower.

Makes those six-battalion brigades slightly cheaper... though obviously you’ll need to keep those third battalions to the rear for use mainly as supports.
Top

thanks, Interesting concept, and possibly a way of reducing the figure count during the painting phase