G'day all,
As some may know, I'm very interested in the Pacific theatre and was looking at this rules set to try out some air war scenarios. I have the excellent set of books South Pacific Air War by Michael Claringbould & Peter Ingman, and want to try some of the battles described in these book. Can anyone here advise me on how well Bag the Hun supports the Pacific theatre, as at first glance it seems very European centric to me.
Top

While most of the examples in the book are given from a European standpoint, it actually does have a bunch of stuff in it for the Pacific. For instance, there are tables for generating pilot experience for the Japanese (both Navy and Army Air Force), a description of the "Shotai" formation, and stats for most of the Japanese planes are present in the rules (including like 7 different varieties of the Mitsubishi ZERO). The "terrain" generator has a section for the Pacific theater, and the stuff on dive-bombing and torpedo-bombing is absolutely given with Pacific theater battles in mind. The "Hineri Komi" maneuver gets rolled together with the "snap roll," but I think that's probably OK.
Top

Hi There
We play Pacific games half the time we play.

TBH we mainly do one off multi player games with 2-6 players rather than campaigns but we have hunted Yamamoto in his bomber a few times.

Have a few pics of a recent game fo stick up.

Getting slaughtered by a surprising amount of opponents.
Top

Hi Len,
Can I ask which version of the BTH rules you are looking at? As I mentioned in my previous post the first version and it’s supplements are very Eurocentric, but version 2 has a wider coverage as Munin mentions.

G'day All,
Thanks for the replies. Looks like I'll have to have a closer look at BTH. The PDF copy seems reasonably priced and I can get the hard copy if it suits.
I'd be keen to see battle reports and/or pictures if any are available.
Archduke,
A friend showed me a rather old looking copy. There was no version number on it, so it may have been version 1 (didn't know there was version 2). I only had a quick flick through to get an idea what was in it.
Cheers
Top

I just played my first game of it at Virtual Lard 3 last weekend and it was a blast. It captures the nail-biting tension of aerial combat really well.
Top

Hi Len,
Sounds like a copy of version 1.
The latest version has a red brown background with a couple of dogfighting aircraft laid out like an old Commando comic, in this case from the:
“Flying Lard Picture Library, price 6d, Aus, NZ 1/-“.

You will find some after action reports and pictures in the Bag the Hun FaceBook Group.

Evening all. Strictly speaking there are three editions of BTH. The very first was a wire bound copy and is probably a rare find. Then there is the copy with a Spitfire on a blue background, and the third (and latest) is the version John describes with the red cover. This is the best version for the Pacific and it includes rules for attacking shipping which many players interested in the Pacific campaigns seem to enjoy. Full stats for the majority of aircraft that you could want.

When we play tested the rules many years ago we played a great many games around Coral Sea and Midway as well as later war punch ups. Great fun.
Nick
Also tweeting as @Dozibugger https://twitter.com/Dozibugger
And don't forget to follow Toofatlardies on Facebook https://www.facebook.com/Toofatlardies/
Top

Thanks everyone for the feedback. From what you are saying the rules should support Pacific games quite well. I'll have to give them a go.
Wonder if there are any stats for Chinese planes in the 1937 - 1940 period? The China air war was small but interesting. You'd have Russian volunteers as well as Chinese Nationalist crews flying their planes. Everyone would be using bi-planes, even the Japanese. Anyway, something to look into.
Top

Few shots of a game of BTH me and Andy played in my garden.

Going to do a full report on it as well, unfortunately shortly after Andy went up to that great wargames show in the sky where dice always roll a six and both sides win every game.

He will be greatly missed by all who had the opportunity to play against him. 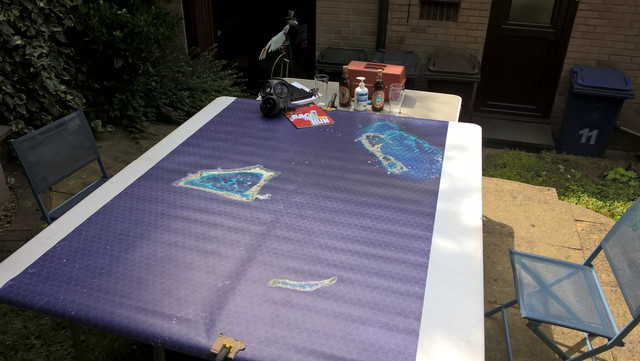 Getting slaughtered by a surprising amount of opponents.
Top
Post Reply
20 posts

Return to “Bag the Hun”