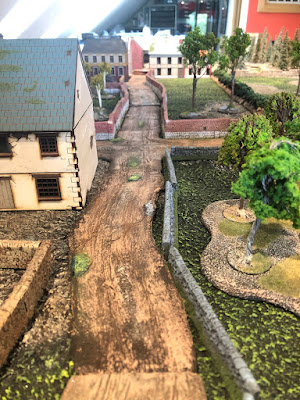 We played turn 4 in our Von Luck campaign yesterday, another German victory I am afraid.

My opponent, Mike, had a novel attack plan that worked quite well. More at https://fuentesdeonoro.blogspot.com/201 ... death.html

I don't have the rules to hand, but once a building has collapsed, it would be rubble, so still providing cover (consider Cassino as an example of this).

On the other hand, facing a Schlepper and a mortar barrage, you are unlikely to come out of this well in any case.

Thanks Peter, we played it as Light Cover but not blocking LOS.

It was tough!
Top

Reading your battle report, I assume that Mike was leveling buildings with none of your troops in them. You should play with the advanced rules for targeting and buildings which prohibits firing on a building unless enemy is detected in it. In terms of playing the period, not the rules, just leveling every building in site to deny them as positions for the enemy is unreasonable with direct fire weapons with limited ammunition.

I would also count the rubble as the same level of cover as the original building, so hard if it was a stone/brick building or soft if a less substantial one.

Yes...there were no troops in any buildings.

Not much I can say now, we can discuss it going forward. It was more the the Mortar that killed me.

I think there is a rule somewhere that says rubble is soft cover.

If he came on with an order of 'level all the builsings' then I have no problem with him doing just that. Though if he changes to shooting at targets of opportunity before he has finished the task, I'd feel he was taking the mick.

I had indeed planned this out before the game. It is hard enough to hit the veteran paras so I wanted to reduce cover if possible. If I recall, Rich counted destroyed buildings as light cover in one of the 1940 Beasts of War games.

My assumption that one can target buildings comes from 10.3.6:

"A building will become unstable if any gun firing H.E. rolls three 6’s in a single Phase when rolling to hit the building or a Unit in it" (my emphasis).
Top

Rubble depends on what cover the buidling was.
If wooden I would make ir light cover if brick or stone heavy.
Demolishing buildings does not work as a tactic in RL as not only does it still give the defenders cover and makes the going difficult for the attackers to move through especially vehicles.

As defender I would simply deploy behind the building and wait.

batesmotel34 wrote: ↑
Thu Jun 20, 2019 2:56 pm
You should play with the advanced rules for targeting and buildings which prohibits firing on a building unless enemy is detected in it.

Actually the rules don't prohibit firing at the building. They prohibit you targeting the troops inside, which when it comes to HE is not quite the same thing. If you want to bring up an engineering asset like an AVRE or an artillery piece like the Lorraine Schlepper to do some speculative demolitions, you can certainly do so.

What I would suggest though is that the attacker notes down some written orders pre-game for his demolition asset (destroy building X, then Y, etc). That will head off any potential arguments about targeting, especially when you start knocking down the ones that happen to have troops in.

Bottom line is that guns like the Lorraine Schlepper were used this way when they were brought up for direct fire. They didn't prowl around waiting for the enemy to appear then snipe at them. They sat back and rearranged the bits of the landscape that the infantry commanders asked to be worked over. Sometimes that was because the enemy had been positively identified, but just as often it was just that the infantry were identifying likely spots based on the layout of the ground and their knowledge of the enemy. Particularly Allied forces in the late war would quite happily conduct "recce by fire", hitting speculative enemy positions to see if there was a reaction.

I played the Germans in this campaign, and this is definitely what I'd advise anyone playing as the Paras to do!

You know there's a strong likelihood of the big gun showing up. Don't deploy in the forward edge of terrain, or in buildings that have a line of fire to where the gun will be. Especially in the "Church on the Flank" scenario, if you deploy within LOS of the Germans, they'll just sit back and batter you into oblivion. Run a sort of reverse-slope type defence instead.
Tiny Hordes
Top
Post Reply
23 posts