Here is the full relevant section from the rulebook:

Roll
Result
1,2 Building is on fire unstable
3,4 Building is Unstable
5 Building collapses. Reduced to rubble which counts as light cover
6 Danger UXB. The building is only lightly damaged, but an unexploded bomb is present

So I think what Mike did was legitimate and the rubble is light cover.

Especially in the "Church on the Flank" scenario, if you deploy within LOS of the Germans, they'll just sit back and batter you into oblivion. Run a sort of reverse-slope type defence instead.

Let's hope I can figure it out!
Top

Bottom line is that his vehicle entry point is a sunken road, so he's got a hull-down firing position for the gun, and it's too far away to have any real chance of hitting it with a PIAT. If you deploy at the edge of cover he can hit you but you can't hit him.
Tiny Hordes
Top

I hadn't see that bit in the BK 1940 book but as they are playing 1944........I would go with what makes sense - obviously need to discuss this before the game but the accounts I have read all say making rubble is making a mistake for the attackers so I see no reason to give them an unreasonable bonus!

PS No other WW2 rule set I have played (FOW, BA) has rubble as light cover either .....just sayin
Top

I agree we will have to have some discussion before the next game as the main piece of terrain is a large church that I presume is stone. It size alone would make it unlikey that it could be taken down in one phase and I agree that that the residual rubble in this case would likely be hard cover. 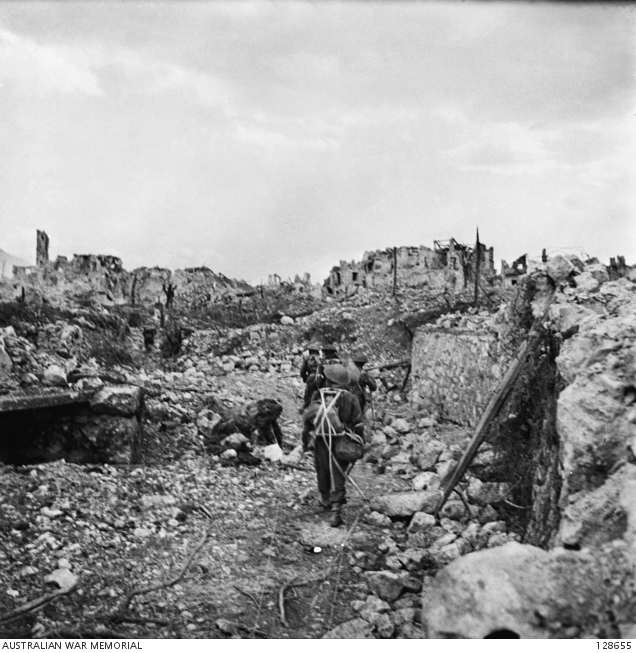 You make a good point TT, I have asked the question on FB!
Top

My understanding of places like Monte Cassino is not so much that the rubble provides equal to or better cover but rather it increased the potency of the defenders. For a large building complex like the monastery, reducing it to rubble makes the entire area defensible, not just along the perimeter. So instead of just breaching the walls (to use a more medieval turn of phrase), and driving the enemy to the next building, the entire square footage of the complex is now defensible which allow the defenders to fall back bit by bit and requires the attackers to fight for virtually every foot. Also, instead of have defenders firing from loopholes or windows, now all the defenders can fire effectively (especially important when considering units like Falshirmjäger with a good number of automatic weapons like MG42/FG42s). Part of the other problems sat MC was the difficulty of getting up the mount itself.

As to the photo and hard cover question, since there are only two classes of cover, I think the reduction to light per the 1940 handbook is a good compromise. Certainly, if there were other levels of cover (Medium?) it might fit into that category (much like bunkers as "particularly hard cover"), but with the two CoC has, it seems that making it light cover reflects the reduction of protection (which of course is offset by the increased firepower of not being reduced to firing only from doors/windows -- especially valuable if the building might not have windows on a given side or maybe only one).
Top

I think if we treat a stone wall or a sangar as hard cover, then rubble should be hard cover too.
Tiny Hordes
Top

Hard to disagree with that logic....combined with making the area very difficult going .has the added bonus of discouraging random house demolitions
Top
Post Reply
23 posts