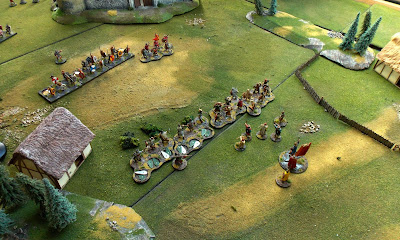 I have put the an AAR report on my blog of the second round of my solo Dux campaign between the Angles and the Britons in the Kingdom of Northern Britain as chronicled by the monk Iohannes.

I still made some mistakes, mostly forgetting that the ranks of the Britons were levy rather then warriors. Not withstanding this, though it was a vicious and quick battle lasting 3 turns only. I focused on use of the Fate cards in this my second game, they really add an interesting dimension to the game.

very very cool indeed I have been following this and posting links to Burton's very own Big Bang Burger Bar and I had been hoping for an update.

Keep up the good work.

Lovely terrain, would be a pleasure to fight over that.
Visit my Website and Blog:
http://www.combatcartography.co.uk
http://www.musingswargameslife.blogspot.co.uk
Top

Game looks great, look forward to seeing the next one!
Top
Post Reply
4 posts • Page 1 of 1