Another Combat Question and the end of a Campaign

Another Combat Question and the end of a Campaign 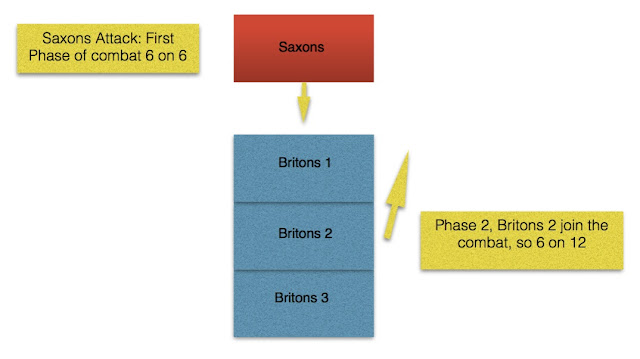 All units 6 men. The Britons are in mass formation. The Saxons move into attack, only Briton 1 are within 2" of the Saxons in the initial attack (phase 1) so it is 6 men on 6 men, the initial assault is inconclusive, so a second phase is fought. My sense of the rules is that in the second phase the Briton 2 unit would move to join in, is this correct? If no when would they move. I find the ruleset very unclear to this as well as previous questions on the forum.


We had a game of Dux last night in our Chronica Iohannes campaign. It was a great Briton victory and the Saxons were vanquished from the Old North. Battle Report http://fencingfrog.blogspot.com/2015/10 ... attle.html

It was a great campaign lasting from March 550 to October 555.

In general, if friendly troops are within 2" of the combat when the attackers finish their charge, then they may (but don't have to) immediately move to join their friends. This is before the start of phase 1 of the combat. If they don't move then, then they don't join the fight until they are ordered to by a noble. As such, you fight phase 2 using the same groups as phase 1.

If they are in formation with their friends and able to support where they are, no movement is necessary, they just join in in phase 1.

The only exception to the above is if the attacker made a successful flank or rear attack with a Carpe Diem, in which case they may choose who they fight in phase 1, even if there is more than one defending group in position to fight. The defenders only get to move after phase 1, and it is only to turn in place to face the attackers.

So, in your case, I would say that Britons 1 are on their own in both phases of the fight. They only get help when a noble orders one or both of the other groups into the fight.

I do have to query your diagram though, since it appears to show all the British groups in a mass formation in column. Rich has specifically said that this isn't allowed - mass formations are for moving in lines not columns.

Thanks Jim, you are correct that they are in a mass formation in column. What I did not put in the diagramme, was that they were moving through a opening in a forest that was only 1 unit wide.

Does this mean that a formation men can not move through ground that is constrained on each side unless they are ordered separately? This just does not seem right. A noble has a 3 groups of levy under his command in mass, he is leading them through a wide path that can accommodate 3 men abreast. I can see why this would not probably happen in open terrain, but at the same time it would be odd that he could not lead them through a forest unless he uses 3CI to activate each group separately. He is after all within 6" of all 3 groups.

I understand the 2" rule and it is very straight forward with groups in line.

I suppose this is maybe why Rich has said that a mass can not be in column because of the complexity of this situation. But at the same time this is a game at the skirmish level where each figure represents a man, terrain limitations are expected in this level of wargaming and I think should be accounted for.

John, on page 38 in the Formations section it explicitly says that "troops moving from A to B in column will always move as individual Groups - there is no march column." So by definition your levy could not have been in Mass formation and your Noble would have had a hard task to get them through the defile.

While I understand what you say about troops stepping forward to fill a gap, you cannot do that between different groups. Only the rear rankers in your own group step forward to replace a casualty. Organising the figures in Groups and fighting as a Group is a fundamental design of the rules. Ordinary warriors are not fighting as individuals.
Top

Thanks John and Jim, I will of course go with the rules. Thanks for the clarification.