Capt Fortier wrote: ↑
Tue Jun 09, 2020 12:15 pm
PS: I think we've all got so used to the beauty of your tables too that perhaps we seem to be taking it for granted... but this one was close to perfect! Even the artistic license of a line of roadside trees and the haystack just add to that "real life in miniature" feel that your tables do so well. Many thanks!

Thank you. Yes, the roadside trees were an attempt to add more character to what was otherwise a rather empty expanse of the table. No impact on the game, purely cosmetic.

Taking so many photographs for the AARs and then seeing everything quite close up as I put the AAR together means all the figures and terrain receive a lot of scrutiny. A good example with this recent game was I noticed some of the helmets on the Americans were very shiny (I give metal figures a coat of gloss varnish first for extra protection and then a matt varnish). Obviously I’d missed a few spots with the matt varnish, so the men were sent back to the workbench for another spray. I shall be scrutinising the pictures for the next game to see if they pass inspection. Terrain undergoes similar scrutiny and often returns to the workshop.

Fantastic AAR as ever, and yes, it looks beautiful too,

The Baron is definitely missing a set of his dice.
Top

We now reach scenario 4 and after three defeats the Germans are in dire need of a victory to have any hope of stalling the American advance. Luck certainly hasn't been on their side, but could it change this time? The full AAR is here: 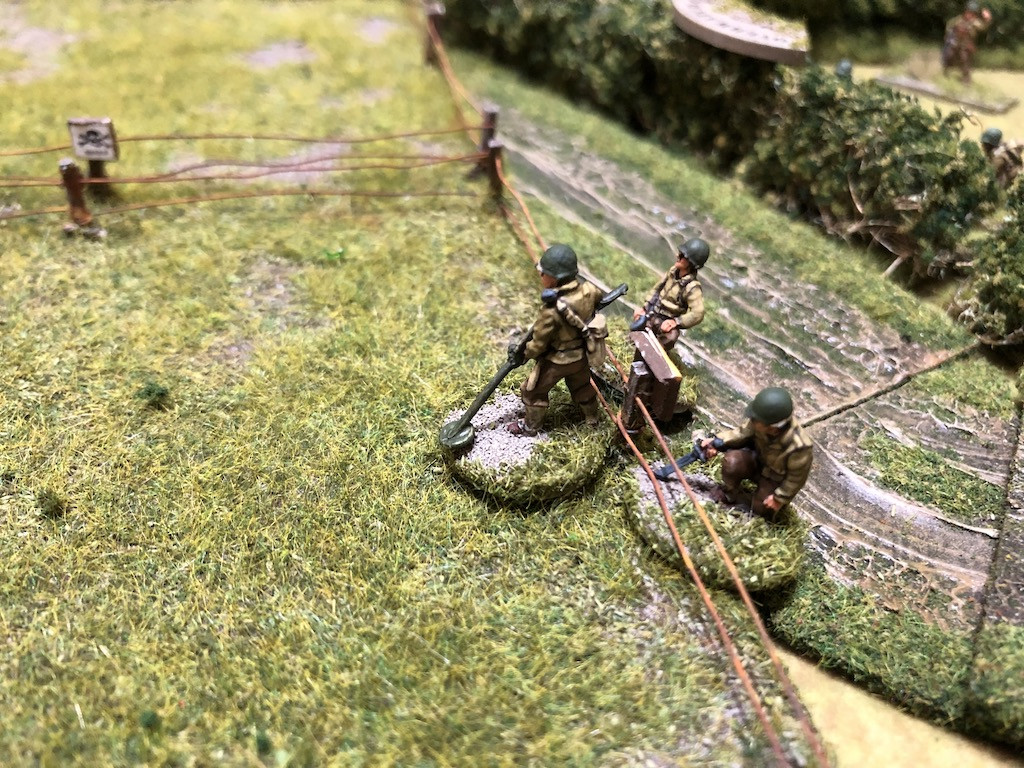 Nice report! I commented on your blog but thought I'd add it here too - remember you can counter attack and grind out another Game Turn to allow more German units to cross the bridge. You don't need to just sit and defend again!
Top

I don't think a German counterattack is possible here. The PSC in question mentions, "The Germans are in no state to launch a serious counter‐attack, so this campaign centres on the attempts of the US 175th Infantry Regiment to drive down the main Bayeux to Carentan highway in order to seize the bridge at Isigny."

Additionally, the action at Cardonville is essentially a "side mission," and not actually part of the ladder of the highway. It's fought with a completely separate German platoon.

But, the option for the Germans to strengthen their defenses (i.e. get a free minefield or entrenchment) is certainly on offer before the Americans can try again.

That does raise an important question that the PSC itself does not answer, however, which is what happens to the minefields or entrenchments that were purchased as part of the previous battle? The section on "Strengthening Defenses," (ATSE p 17) implies that defenses stay in place as long as a table is occupied (i.e. that particular map is the same one being fought over), but that could get crazy in the long run.
Top

Good points there. Looking at the notes for the campaign it states:

At any point in the campaign where they hold the initiative, the Germans may launch a localised counter‐attack. However, they may never attempt to advance any further forward than their positions at La Cambe. As covered in At the Sharp End, this would involve playing the scenario as it is indicated on the ladder....

So a localised counterattack is an option. I think that’s reasonable. US progress down the highway is impeded if the flanks are not secure and so a counterattack here just means clearing the flank will take longer. However, as you point out, where would it be on the ladder? Scenario 3 is not appropriate as that’s on the opposite flank. The option is the map in scenario 2, back at the highway, which is much more logical. Alternatively we create an extension of the scenario 4 map that simply represents the ground in between, but then we don’t have any previous support options for the US (we know the Germans get 10, but the US get what they have in the earlier scenario).

I’m inclined to interpret this as a failure to secure the flank and the localised counterattack is on the lead elements on the highway, in other words back at scenario 2.

I’m also interested in understanding the options for the fixed defences at map 4. As I currently understand they all go, but I get one free to add to my support in the next scenario. That said ATSE says if I ‘abandon’ that table I lose everything, so does a localised counterattack constitute abandoning the map?
The Tactical Painter https://thetacticalpainter.blogspot.com
Painting little soldiers for tactical battles on the table top
Top

I'm pretty certain that fixed defences stay. I don't think you could exceed the limits on number of minefields/Road blocks though.
Top

Any reason Dave didn't move his tank forward sooner - too focused on moving up the infantry, perhaps? I felt that some HE and MMG fire from the tank might have caused you more problems, but easy to be wise after the event!

(You can keep my dice, they seem to be working a little better for you now - certainly better than they ever did for me!)
No plan survives first contact with the dice.
Top

BaronVonWreckedoften wrote: ↑
Sun Jun 14, 2020 10:32 am
Any reason Dave didn't move his tank forward sooner - too focused on moving up the infantry, perhaps? I felt that some HE and MMG fire from the tank might have caused you more problems, but easy to be wise after the event!

(You can keep my dice, they seem to be working a little better for you now - certainly better than they ever did for me!)

To have a line of sight to the first Germans to deploy into the orchard would have required the Sherman to drive into it which would have been very risky given the Germans have panzerfaust and panzerschreck. A destroyed Sherman with a dead junior leader could knock his FM down by as much as four points, so it would have got a lot of my attention (and Dave knew it would).
The Tactical Painter https://thetacticalpainter.blogspot.com
Painting little soldiers for tactical battles on the table top
Top
Post Reply
73 posts