In the final game of our All American campaign, the Americans emerged victorious, winning the campaign.
Memorable moments during the game:

"Glückspilz" Graber succumbing to his 4th wound after being patched up twice by the German medic.
Sergeant Bronco Bill stopping a German flanking manoeuvre while unconscious.
Failure to activate the German panzer when it finally would have been able to take a shot at paratroopers in the open. 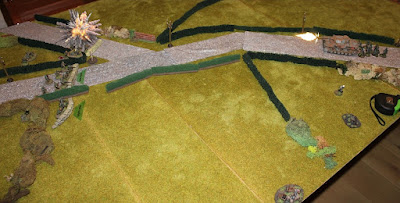