I have finished the brushwork and varnishing of the first eight miniatures, which amounts to one and a half ranks of four in the first Unarmoured Unit of Early Byzantine Skutatoi I have planned. Another unarmoured unit is slated in after this one.

I started these quite a while back but was quite seriously "distracted" by my Anglo Danes, an army of which roughly at about at the half way stage now. By applying my "Rule of Threes" (I know! Crazy!) the Anglo Danes have now been put to the back of the queue of my three ongoing projects remaining visible on the "To Do" shelf. I find that it very useful to have a visual reminder of what projects I have have been currently working on as this tends to stop me from straying into temptation when it comes to all things shiny on the 28mm wargames market! We have all been there!

That said, I have avoided repletion and can now present the first eight Unarmoured Unit Early Byzantine Skutatoi. On the painting table I have presently the next eight which includes the command. The command being among my favourites to paint as there are the rather juicy hand paint the banners and patches to paint which are always great fun. Talking of banners, I am beginning to run out of ideas for banners for this army and only have Theodora and Belisarius as images that are easily adopted for the Sixth Century CE. So, it anyone has any suggestions, preferably bases on 6CE Byzantine art, please let me know.

The army will be moving forward into the Heraclian era as I have plenty of infantry models that are suitable thanks to the substantive and beautiful Aventine Early Byzantine range, which has plenty of scope for later infantry types beyond the Justinian era.

For some crazy reason I am getting the "Your message contains too many URLs. The maximum number of URLs allowed is 2." indicator despite only posting two URL's

For the pics please feel free to jump over to my blog for a sec:
https://justaddwater-bedford.blogspot.c ... oured.html
Top

For banners. a saint or two might work, or a depiction of a relic like the Sandal of Jesus or the crown of thorns.
My blog: http://littleleadwarriors.blogspot.ca/
Top

Both good ideas. Thanks.

I was thinking more just a chi rho symbol for the more lowly infantry such as the unarmoured types. For the more elite units I wanted something more high class,chic even. 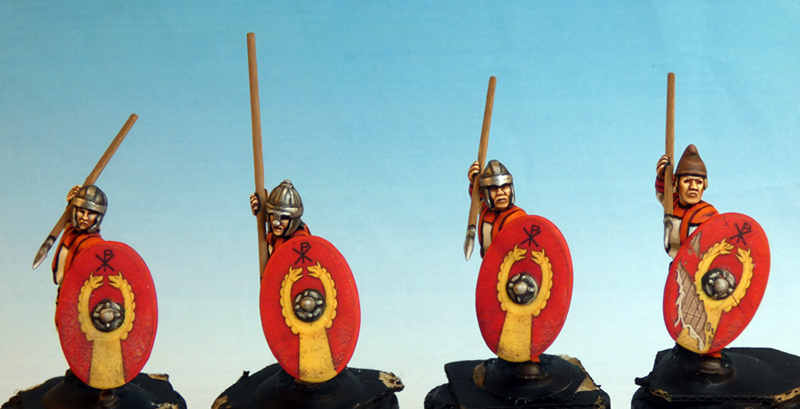 When I can I will