Heh. Yeah, "gently used" is not exactly what comes to mind when discussing vehicles in North Africa. I'm also about 75% done with the Pz IV from several posts back.
Top

Great work and very creative use of magnets, some nice ideas there. Paint chipping is always a tricky one, how much is enough? I recall watching a modelling tutorial about it once and something the guy said has always stayed in mind, “just when you think you’ve done enough is probably the moment when you’ve done too much”.

Just one tip, if that’s not being too presumptuous, if paint is going to chip (and there’s quite a big debate in the modelling world about whether it does at all) then it is most likely to happen on exposed edges and corners particularly those that come into regular contact with terrain, boots and weapons and equipment that is regularly moved. Paint is less likely to chip from the centre of a panel unless there has been some sort of impact.
The Tactical Painter https://thetacticalpainter.blogspot.com
Painting little soldiers for tactical battles on the table top
Top

Not presumptuous at all, and I completely agree. That that's why for the most part I tend to focus the wear on corners, edges, hinges, fenders, and step points. You'll notice the wear is heavier on the running-boards, for instance. You can see that more on some of the other vehicles I've done, as I freely admit I probably went a little overboard with the Opel. I also tend to put more chips on the front of a vehicle than the sides/rear, as when vehicles are in convoy the sand/dirt/rocks tossed up by vehicles in the lead will generally impact those areas. A brief glance at the hood of my RAV4 after years of highway driving sadly confirms this notion.

In addition to my Italians, I also finally finished off that Warlord/Italeri Panzer IV: 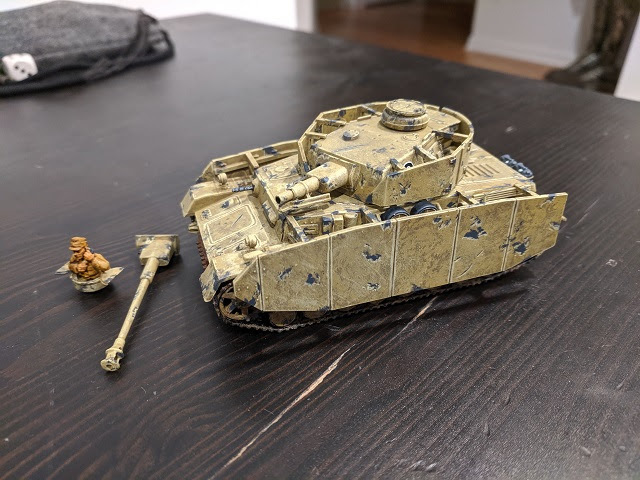 This is of course another example of my obsession with magnetization, with the barrel, hatch, and extra armor all removable: 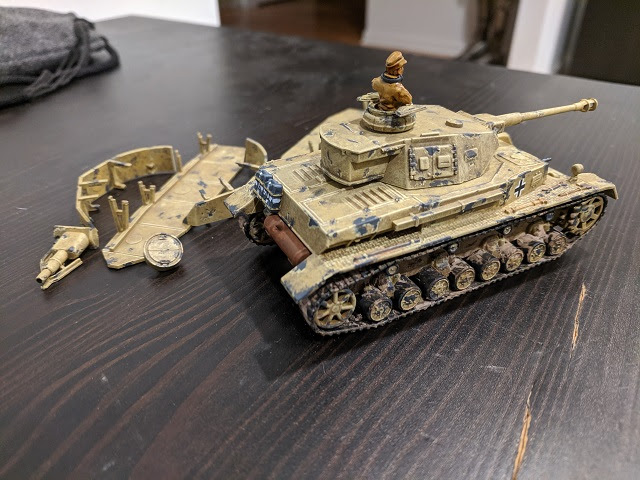 One thing I forgot to do was weather the decals a little. They look super bright and crisp which is...not what I'm going for with these. I'll likely take care of that tomorrow.
Top

I love this so much! Such a clever and well executed idea. I get stuck into a kit and forget all about things like this until the end, and it then comes down to a shrug and an "oops"
Top

When we were play-testing the "Totensonntag" PSC, we made liberal use of stand-ins for various components - one of my gaming compatriots has a bunch of Corgi 1/50th Bedfords, for instance, and more than once a Sherman was used as an ersatz Panzer III. But now that it's out there, I'd love to do a full replay and AAR of the campaign, and that means I need a bunch more British vehicles! To that end, I've got a K2 "Katie" Ambulance, a Bedford truck, a Universal Carier, and a Morris Quad Tractor with 25lb gun on my worktable now. And given that my time is much more open now due to Coronavirus, it's a perfect opportunity to get these finished.

The desert is a rough environment for vehicles; intense sunlight and fine grit both have interesting effects on painted surfaces. To get the right kind of mottled, sun-bleached base, I tend to paint my desert vehicles (both German and British) in triads, with a base coat applied by airbrush, a mid-tone heavily stippled on, and a highlight tone lightly dry-brushed on in a cross-hatch pattern. Once this is done, paint chipping/weathering is applied to places weathering makes sense (leading edges, steps, sharp corners, etc). For the British vehicles, my triad is VMC Green Ochre, VMC Dark Sand, and VMC Pale Sand. To give an idea of how this builds up, here are the three pieces of my 25lb gun train in each stage: 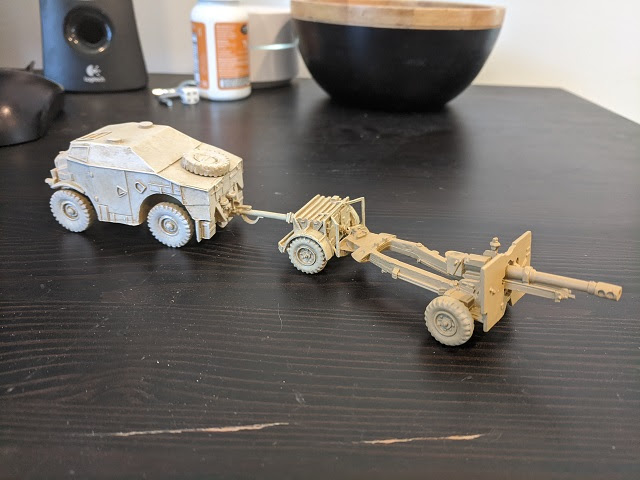 A better "side-by-side" comparison is the ambulance: 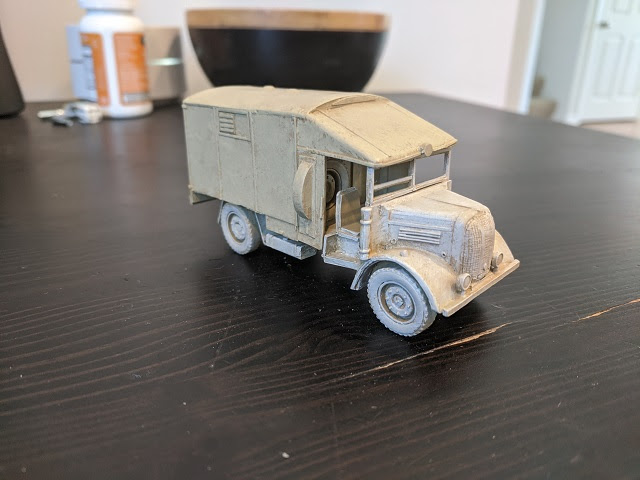 My lighting is a mixed natural and warm LED, which washes things out a little bit, but it should give the general idea. This method is really fast and easy to do, with the weathering and details generally being the longest step in the process. If you look back in this thread a little bit to my Crusader, it's done the same way and these ones will be painted to match.