Morning guys and welcome to another day of lockdown!
Having had a collection of 15mm FPW figures for many years and having been a great fan of both Pickett's Charge and GDA I figured that I would have a go at adapting Pickett's Charge (it being the closest in time scale to the FPW) to this period. The most obvious change would of course be the development of new weapons systems and therefore the increased in ranges at which engagements took place. This therefore made a change in ground scale inevitable as I didn't want artillery off table in an adjacent room which would have been necessary if I had kept the ground scale the same as PC.
As the ground scale is increased it was obvious that the 'brigades' used in PC would need to be replaced by French and Prussian 'divisions' and that each unit would be a regiment of infantry, brigade of cavalry or a number of batteries but still using the basic rules as is.
There simply isn't the space here to go in depth into what I have come up with but if anyone is interested please have a look on my blog.

May I just say that of course these are my own adaptations of these fantastic set of rules but any comment both good and bad will be welcome.
Oh, and a photo: 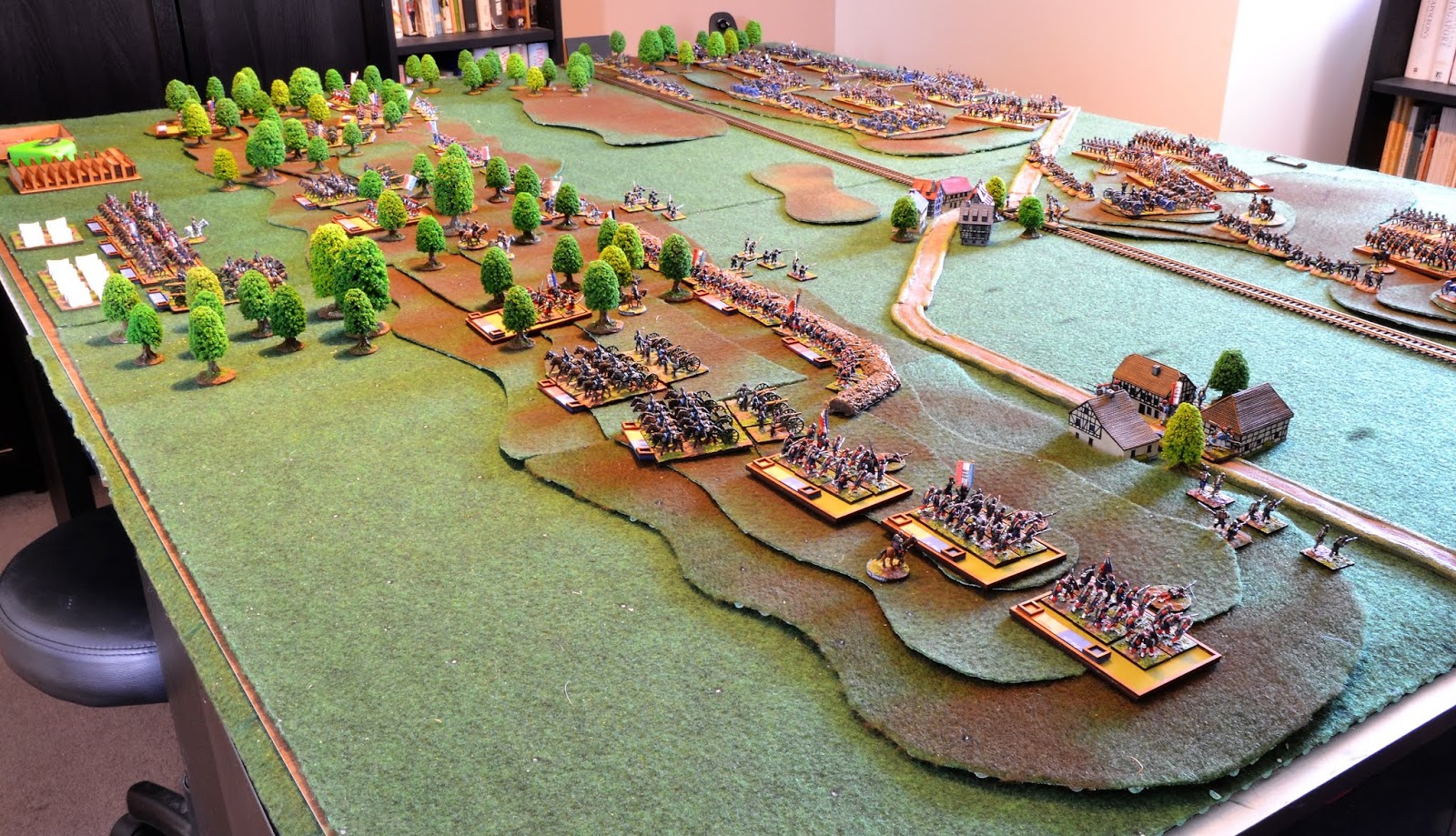 A few more moves done, it was sunny in Northumberland and as that doesn't happen often so I didn't push the game on as much as I could. Anyhow the Prussians, though doing steady damage with their famed artillery got rather impetuous and pushed on in the centre of their line towards the French and suffered the consequences!
More in depth descriptions of the rules changes made if your interested: 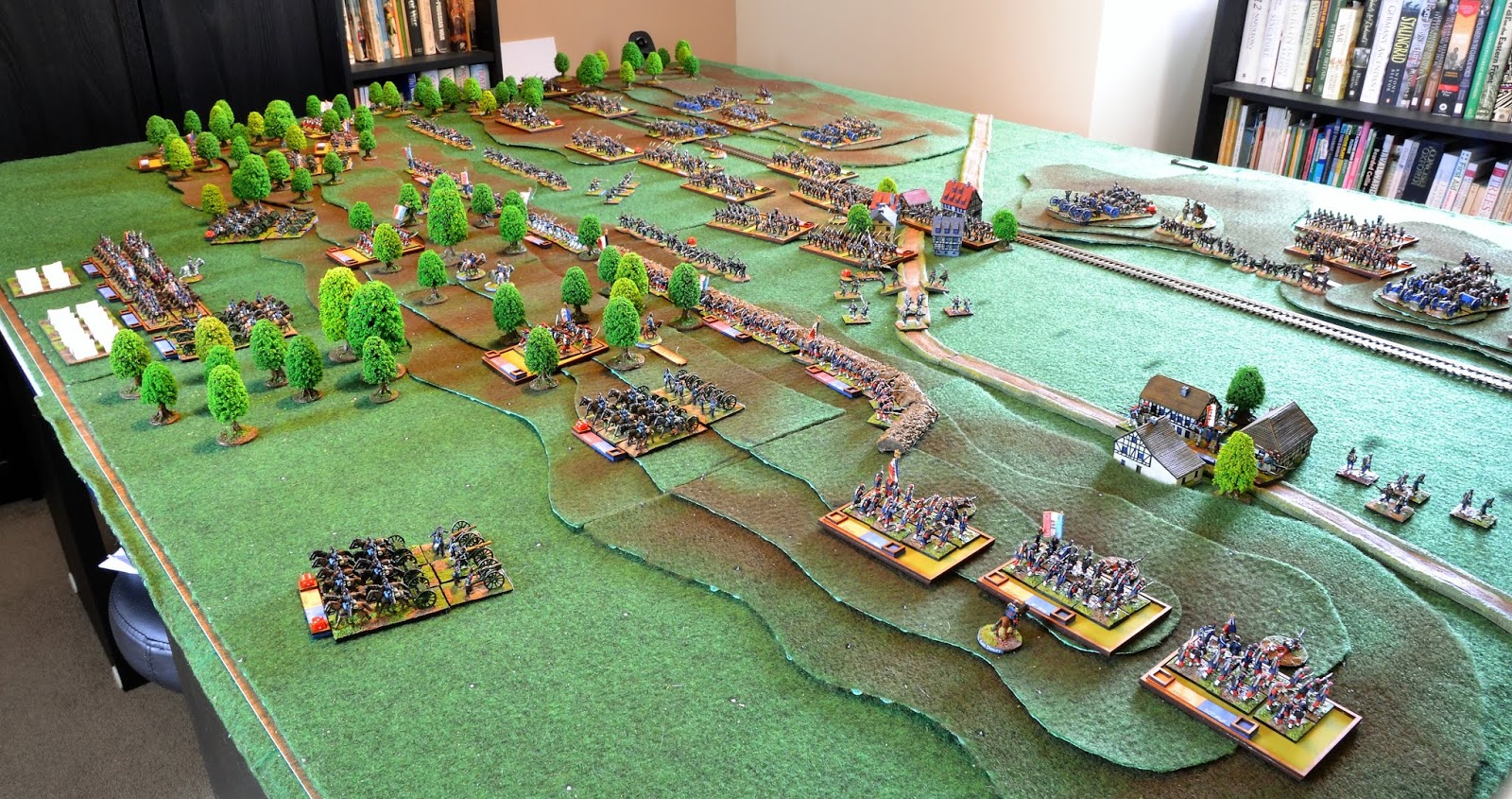 It's on the turn, the Prussian centre gets bogged down under murderous fire but the French left crumbles. Turns 4 & 5 of Position Magnifique, well maybe not quite so magnifique? 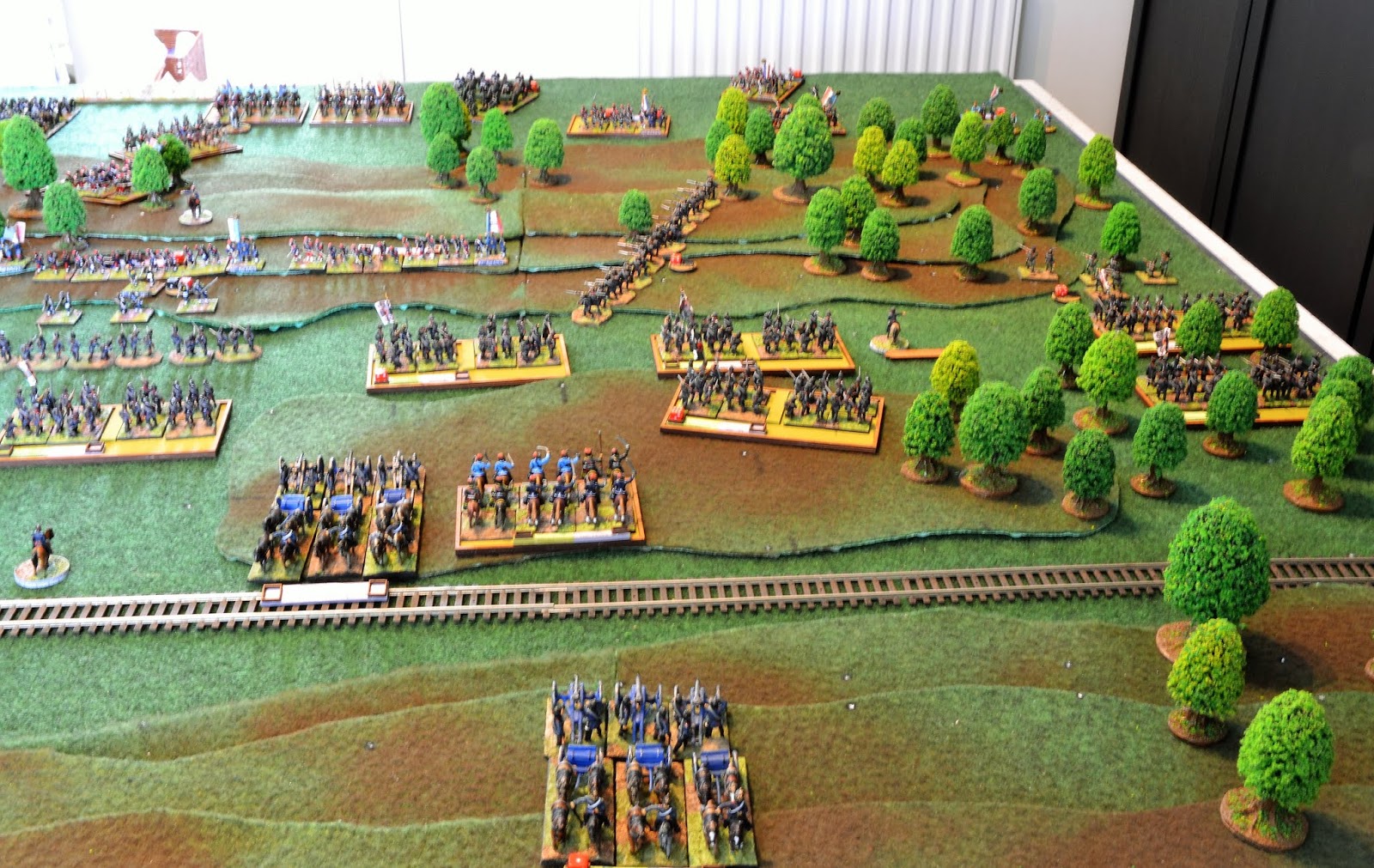 Turns 6 & 7, can the Prussians exploit the French collapse or will the Chasseport win the day? 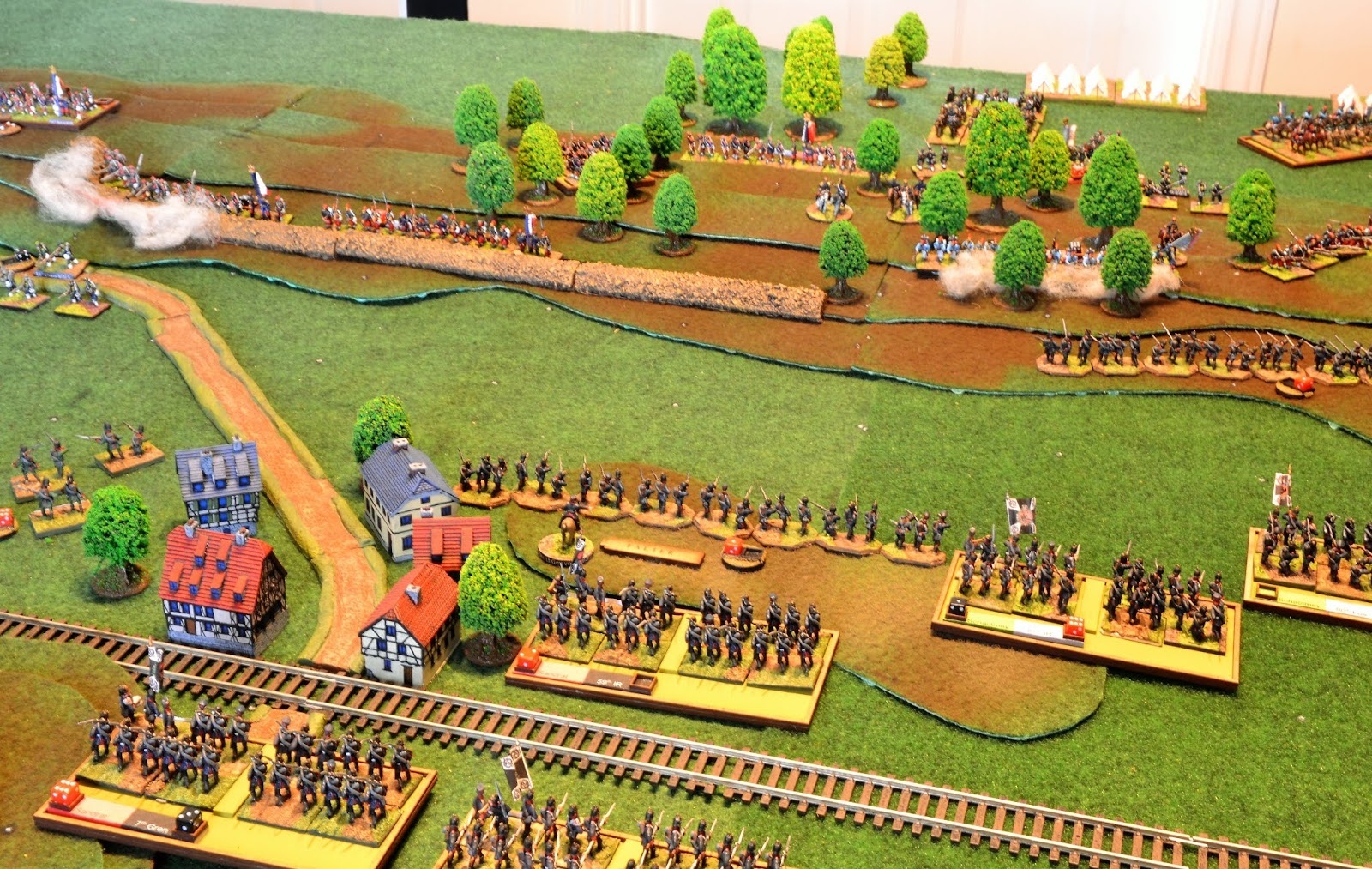 Dave - this is really interesting. I had been wondering if I should get these rules and think about adapting them for Franco-Prussian and Austro-Prussian wars. Would be very interested in your views as to how they work in comparison to adapting Fire & Fury or using Bloody Big Battles (if you have any experience of these). Or just how they work for representing the differences between different nations tactical systems (particularly infantry) and command abilities. Thanks in advance.
Top

Gavin, I have used Brigade Fire and Fury quite a bit but not the regimental version and the figures you see on here are on the Fire and Fury bases so can be used for both systems, Age of Valour is the up to date version which covers all of the wars of this period. My advice for what it's worth would be to get both Picketts Charge and Gen de Armee regardless as for me they are the best sets out there for the periods they cover. I decided to adapt Dave Browns rules to the Franco Prussian, Austro Prussian and Franco Austrian wars because his systems are both excellent and all of our club knows the rule systems well and so will take little persuasion to use them! As to representing the differences between representing the tactical systems I will leave that for others to judge. As I finish this game I intend to write a conclusion summing up what has gone right and what I feel hasn't but I also want to take it to the club and let the lads get their teeth into it and see what they say. I have ideas for rule adaptations for the other conflicts in this period but need to get them down on paper, for example the 1866 Austrian infantry will not be able to advance in line formation, they can change facing but not advance, this will force the Austrian player to always manoeuvre and attack in column, which is what they did after being so impressed with the French system used in 1859. Lets see what comes out in the wash.
Dave.
"I raised myself up from nothing to a state of extreme poverty"
Top

Dave - thanks very much.
Top

A disorderly withdrawal and a missed opportunity? 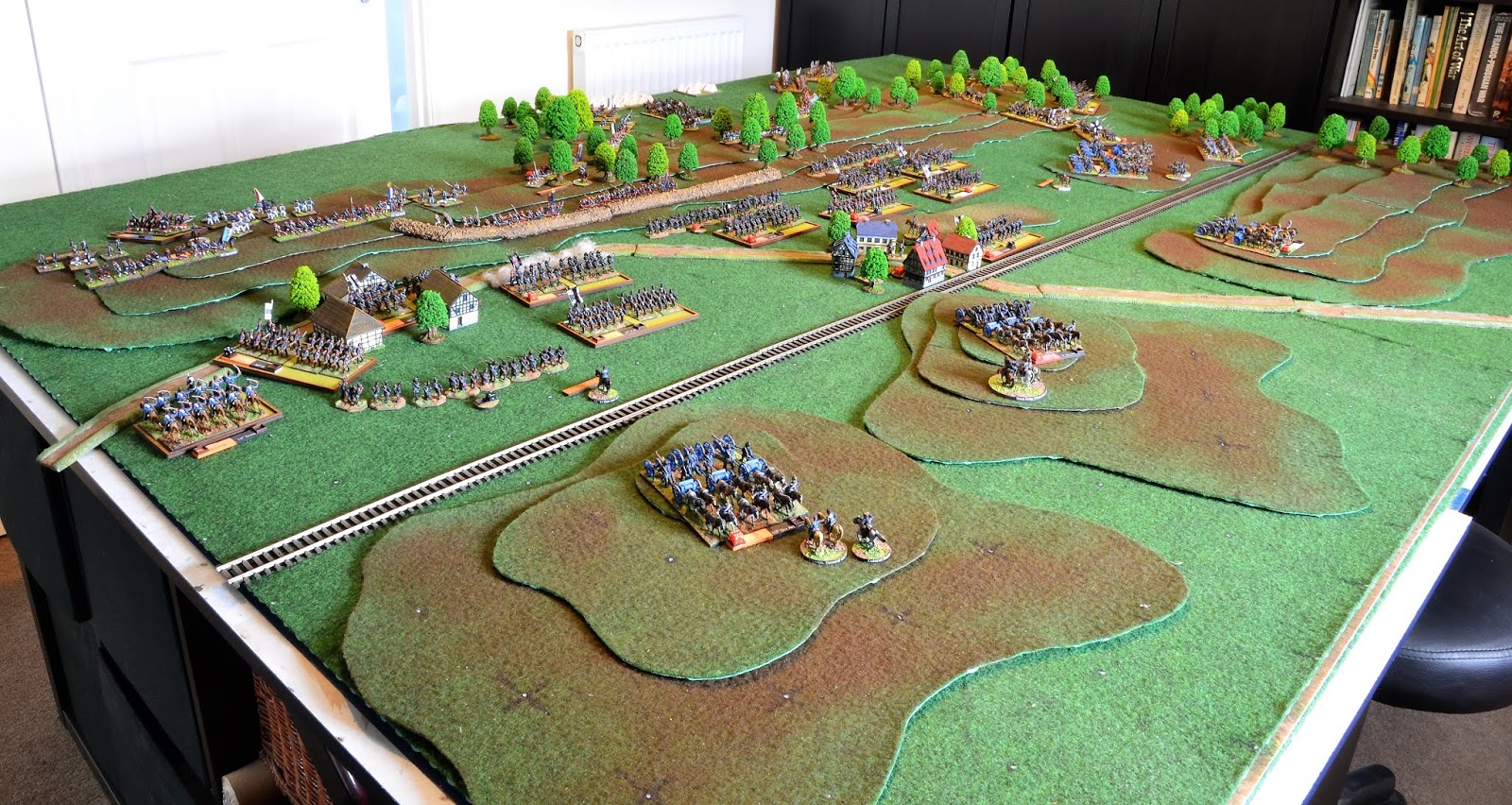 A final photograph of the game with the Prussians forcing the French off the ridge but paying a price for it. I will examine what worked and what didn't in the final post this weekend.

Conclusions:
To sum up:

1). The table was rather too small for the number of figures on it so it was a frontal attack with little manoeuvring, though in my defence the object was to play test tactical scenarios and how the mechanics of the rule adjustments work or not.

2). Long range artillery fire was pretty useless which frankly is as it should be and usually is in most rules. Both sides need to be at effective range, I'm trying to decide if there should be a longer short range, canister or more accuracy at that distance, particularly for the Krupp guns (it's 20cm at the moment) don't know, we'll see with that one.

3). The Prussian artillery really could have done with spending more time softening up the French. Now in the later stages of the conflict they did this and it could be represented by giving them a bombardment phase at the very start of a scenario, say five attacks from each 'battery' before the game itself begins? You have to be so careful though as this still has to be an enjoyable game for the French player so maybe on a roll of a dice for each division the Prussian divisional commanded ignores whatever orders he has and attacks the French position regardless of orders (say on a 6). This happened surprisingly often!

4). Small arms fire seemed to be ok though I may try out increasing the cost of reinforcing the Prussian firing line. It costs the supporting unit 1 casualty point to replace a stand in the firing line at the moment, I may increase this to 2 casualty points. This will make the Prussian player think harder if it's worth standing in-front of the French infantry and exchanging fire or whether it's better to just charge in asap before their blown away.

5). An absolute must is to look again at the General de Armee melee charts and incorporate more of them into these rules. Thinking about it the Pickett's Charge rules in that conflict rightly assume that other than troop quality both sides are very similar but I think that in the European continent the subtle differences can be brought out slightly better using the Gen de Armee melee rules, certainly many of them. Fighting in built up areas is a very noticeable one were I think the rules in Gen de Armee favour the defender more and make it more difficult to prise a unit out.

6).The main thing I want to avoid is to stray too far from the basic structure of Dave Brown's set of rules and nor do I want to have reams of pluses and negatives for players to add and subtract during the game, This period is more complex than either of the two yet still retains a flavor of both.

Hi, very interested in what you have done for Franco Prussian and other later 19c wars, look forward to your final summery and I will give them a try, also think GdA melee will be best.