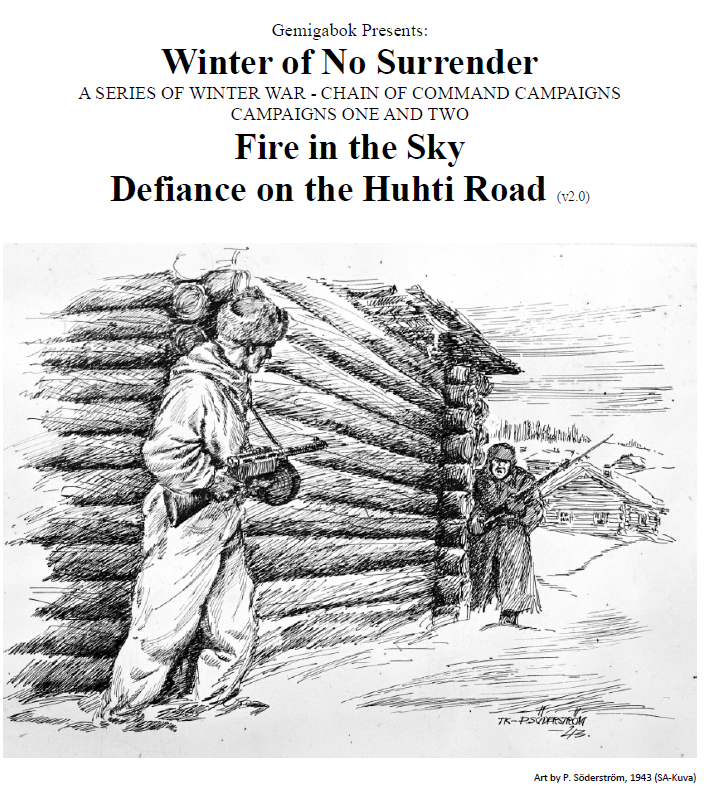 The sky in the south is blood red, a gigantic sheet of tree-silhouetting crimson stretching from the south-east all the way to the south-west and rising up to the heavens where it mingles with the stars. It is the glow of hundreds of homes and barns set alight by the Border Companies. The orders are to leave nothing to the enemy. They may get our lands but they will not have our homes. There is something so very final about it all.

Exactly 80 years ago today the Soviet Union began its invasion of Finland, starting what soon became known as the Winter War. Today I’m releasing the first two skirmish-scale campaigns in the Winter of No Surrender series - Fire in the Sky and Defiance on the Huhti Road. They follow the fates of forces from two Finnish units – the 7th Border Company and the 6th Independent Battalion - during the first days of the Winter War as they attempt to delay the invading Red Army's 142nd Infantry Division on its way to the Taipale Sector, some twenty-five kilometers by road. The Soviets have a schedule according to which they should cover this distance in approximately one day. Actually they will end up spending a whole week getting there.

In Fire in the Sky the 7th Border Company is responsible for a six-kilometer stretch of the road. In Defiance on the Huhti Road the 6th Independent Battalion is then responsible for the next nine kilometers between the village of Palkeala and Rautu village. At Rautu, the Finnish 3rd Brigade waits for the approaching Russians in entrenchments protected by barbed wire, anti-tank obstacles and ditches, minefields and anti-tank guns, ready to give battle. The Mannerheim Line itself is located beyond the Lake Suvanto, some 13 kilometers to the north of Rautu.

The Soviets will field two Rifle Companies (one command platoon, three rifle platoons and a machine-gun platoon each) from the 142nd Division. Despite these impressive forces the nature of the road network is such that each side will usually only be able to bring one - possibly reinforced – platoon onto the table at a time.

Though written for the Chain of Command rule set by Too Fat Lardies, the campaigns should - with minor alteration – also be usable with other platoon or company-scale wargames rules (including but not limited to Bolt Action, Battleground WWII, I Ain’t Been Shot Mum, Battlegroup, Nuts! and Disposable Heroes) and notes are included for that.

The campaign is downloadable from here:
http://www.saunalahti.fi/~ejuhola/7.62/ ... index.html
Top

Very nice! Just finished downloading it. Hope to get this rolling in a few weeks. Thanks again for the dedicated work for the small period.
Greg P.
Tucson, AZ, USA
Top

I would recoomend forum those who have a interest in CoC, even if not the Winter War, have a look at Eero's optional rules for CoC, he has a lot of interesting ideas. http://www.saunalahti.fi/~ejuhola/7.62/ ... s_v2.0.pdf.

I had a complete read through this morning and this is an enormously valuable resource for those interested in the Winter War. Really quite an impressive accomplishment.

Eero, I meant to follow up on our previous discussion, do you have any recommendations on how to carry out this camapign without a referee?

john de terre neuve wrote: ↑
Sun Dec 01, 2019 5:47 pm
I meant to follow up on our previous discussion, do you have any recommendations on how to carry out this camapign without a referee?


Thanks for your kind words!

Running the campaigns without an umpire should not pose a problem but it has to be done by the Finn player. As designed, there are a number of thing the Finn player does not know. These include:

1-4 are probably not a problem as often CoC players would share this information anyways. If necessary, you can also document any pre-game dice rolls with a camera and reveal them later to prove that there was no foul play.

5 is not a problem either, as the Russian player can write down on a piece of paper which card he intends to play this Hour and reveal it when required to.

6 requires a bit of role-playing. Most often these are worded like "If the Finnish player requests/wants to…" and you can just roll a d6 and on 4-6 the Finns will think of the solution.

7 is the hardest. Probably you could start rolling a d6 every hour starting three hours before the time indicated and if the result is a 6 then the campaign ends?

There may be others, but I think those are the major ones. I'll add to the list if I run into more.

As expected, I'm working on a little update to the currently posted version of the campaign. I've of course spotted some problems (including the Soviets getting too much support in every scenario, and that the U1.7 Initiative and Actions section needing a bit of clarification/changes) and some bigger and smaller issues and will try to fix them. I'll also be adding page numbers and the Contents document, and the T-28 as it makes an appearance in The Gates of Rautu. I should have the update ready next week. If you intend to play a game before that do let me know and I'll try to get you the changes ASAP.
Top

Thanks Eero, that all seems easy enough in respect to playing the campaign without a referee.

Looking forward to seeing the T-28 in action as one is waiting in my Soviet box of figures.

I wasn't even aware 172 did Winter War soviets. WIll have to order some immediately! Thanks!

I was about to answer Strelets, though their stuff is not compatible with almost anything else. Except maybe those horrid Stonewall figures.
Top

Looking forward to seeing the T-28 in action as one is waiting in my Soviet box of figures.


You may need two more to make a platoon...