Trying to put together a mission which involves Guerilla forces attacking an isolated French signal tower somewhere on the Peninsular. Got various ideas in my head involving some variation on Rescue Mission - i.e. approach an objective from across the table, delayed response of defenders, insert a Task to disable the tower and bonus points to 'Rescue' the codebook. Also thinking of dialling down the available French response so that the French is a relatively small force.

...but it's such a classic scenario I'm sure someone has covered this ground before. Any tips on published (official or unofficial) scenarios?

PS: it's an excuse to finally paint and use the Warbases Chappe Signal Tower I have in my mdf pile. I appreciate these may not actually have been present in Spain.
Top

Great idea for a scenario. I'm thinking a rider comes galloping up to the signal tower. He has a message about an impending British attack on French forces that must go out or the French will suffer a terrible defeat. The message has no more than four parts each describing the location and timing of the attacks. The signal tower crew hurry to their positions while the French defending forces deploy as the Guerilla forces begin their attack. Maybe there are some British riflemen assisting the Guerillas. Signal tower crew when activated by their leader must roll 2D6 needing an accumulated total of 12( may have to adjust this value) to get each part of the message out. Level of Victory( or loss) being determined by how many parts of the message are sent.

For this scenario, both sides must finish quickly. To simulate this keep track of the number of flags left unused at the end of each turn for each side. Once the French have their sixth flag unused, French reinforcements arrive in too much force to be held off. Once the Guerilla forces have accumulated six unused flags, night has fallen and no more messages can be sent.

Each signal crew member killed increases the total to complete the signalling task by two.

These are just some ideas to get things moving. Hope it helps and I would be very interested to see what you come up with.
Top

Thanks for the reply. some really nice concepts there - I particularly like the breaking the task into four consequential chunks, and the use of flags as a timing element. It's an unusual and impressive configuration of the excellent SP2 toolbox. Since you've obviously put some thought into this concept I'll see if I can't work it up on the table at some point soon. Now it's been painted up I'm determined this signal tower will get more than one use!

Going to stick with a simpler set up for tonight's game - it's going to be more of a bad weather raid in which sending signals under duress is not possible:

The 'rescue of an important person' replaced with a Task (Chapter 10) to put the tower out of commission. Side mission to capture the codebook to hand over to the British.

French are being surprised, so French get no support.

This game is being played as part of a loose campaign we've been playing at Perth Miniatures Gamers Group: the exploits of the Spanish Guerilla leader 'El Fontanero' vs the odious (and odorous) Colonel Reblochon. As it stands the French have captured Fontanero, and have decided to make an example of him by sending him down to the nearest city for interrogation/execution, but are waiting to signal for a heavy escort to be sent up. Destroying the signal tower will buy the guerilleros time to bust their leader out of French custody.

Talking of the signal tower - here it is: Warbases Chappe semaphore arms mounted on my pre-existing scratchbuilt Spanish windmill tower. It can be swapped out for regular windmill arms as needed. 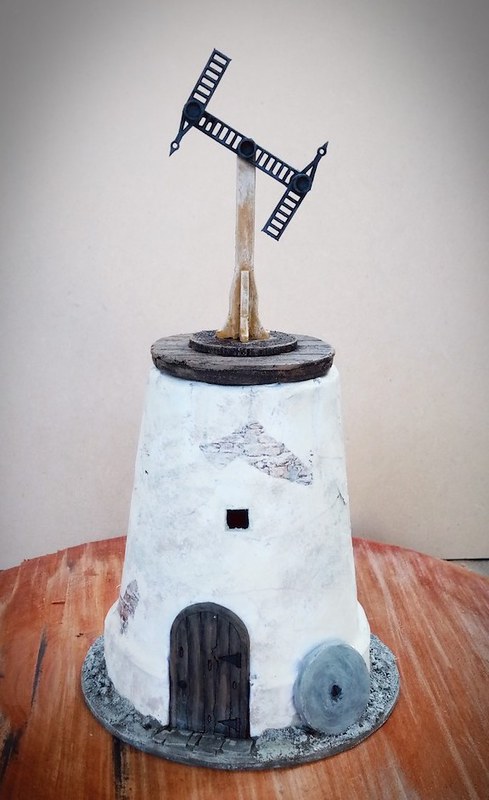 Love the re-purposing of the Windmill (which I know is some coffee cups inverted).

On this, I thought there was a scenario in the Fondler articles?
Top

No, just browsed through my copy of Fondler and I am mistook, no signal tower shenanigans.
Top

Must have been one of Fondler's more secretive missions.
Top

I've got a downloaded word document scenario called "X. Signal failures" which I now can't find where I sourced it from - but I'd be happy to share it if you want to PM me. It involves British needing to repair a signal station and French trying to stop them.
Capt Fortier

Capt Fortier wrote: ↑
Wed Nov 06, 2019 3:39 am
I've got a downloaded word document scenario called "X. Signal failures" which I now can't find where I sourced it from - but I'd be happy to share it if you want to PM me. It involves British needing to repair a signal station and French trying to stop them.

Yep, I've got the same one!

And I've searched up, down and sideways to find where it came from too...seems to be part of a series? A fan-published campaign? Very curious to find the source - can anyone in the hive-mind help?

"Sir,
It is imperative that we repair the telegraph at the signal station which is located atop the hill known as Urgull in the vicinity of Venta de Pantalones."

I'd be grateful to anyone who wrote this, or knows where it came from. They deserve the credit.
Top

The Signal Tower scenario is one of mine.
The climate crisis has already been solved. We already have all the facts and solutions. All we have to do is to wake up and change. - Greta Thunberg