So, I recently made a 28mm Kriegsfischkutter on my anycubic photon.
Initially just for fun, untill I read the following tidbit:


"Whilst the fighting in the vicinity of Benouville was in progress there occurred one of those unreal silly things that happen. Down the canal came two German Naval coastal craft of the double-ender trawler type. Blissfully ignorant of hat had happened inland the, escaping from the hot bed at Ouistreham, were setting out for the naval basin at Caen. The troops let them get really close up and then opened fire. When it was to late the Germans saw the trap they had fallen into and tried to turn round. This was fatal. They ran aground and were captured virtually without a fight.”

Now obviously those were a different kind of boat, but still!
Since my mates and I are currently working on a pegasus bridge table it could make a cool"what if" scenario!
so hence I was wondering, are there any rules out there for riverine/coastal boats?
Top

Have not seen any for boats this big but I reckon you could modify the AFV rules to represent them.
JL, gunner 1, gunner 2, driver etc.
Give it hard cover.or armour 2 etc.
Maybe allow it to move 3D6 and still fire?
Top

I agree with TT, treat them the same as AFV for simplicity's sake. O was actually looking into developing rules for riverine type actions and the water craft that go with them, but research didn't indicate enough incidences of actual combat to make it worthwhile. Nearly all rubber boat type river work was down out of sight of the enemy if at all possible (Niejmegan Bridge excepted).
Top 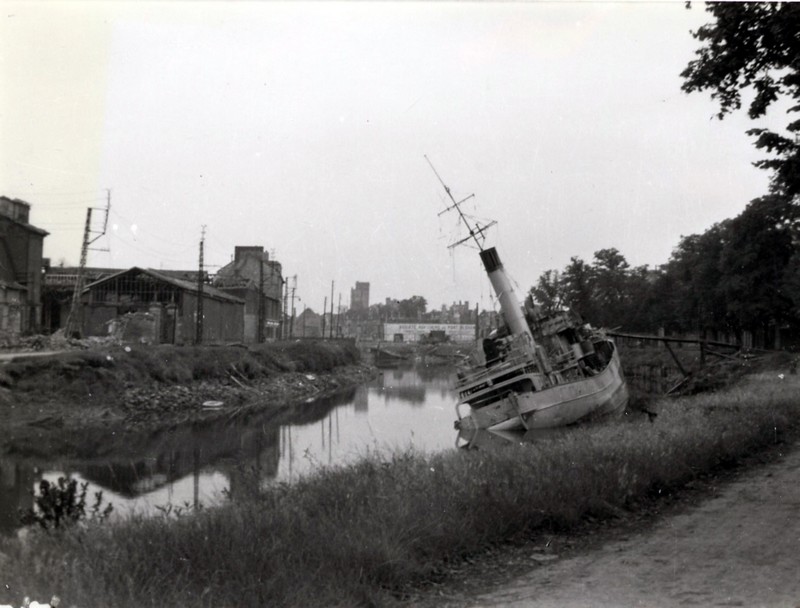 thanks chaps, i'm indeed talking about the bigger type of boats! the armed trawlers!

it's a 1-300 scale kriegsfischkutter upscaled to 1-56, and measures about 43cm in length.
Standard armamaent are two flak 38's but i also printed 3 pintle mounted drillings and even an antitankgun that could fit on it!
Top

I would consider fiving a boat this size a SL also JL and 5 crew per gun of artillery size no JL for MG guns.
Need to up the shock too to maybe 6?

Hard cover for gunshields maybe armour 2 or 3 for the control room.

Onte killing driver/steersman would not stop the boat but would have it out of control for a phase or two until alternate steering rigged.

Would use rules for hitting vehicles with light mortars etc but make guns or cabin as possible individual targets.

Need rules for fire breaking out / putting out.

Truscot trotter to the rescue!
I know normally they had a crew of 18 so any ''platoon'' should be build around that number.
With 2 flak 38's that's two times 5 men of the crew that would be occupied with handling those guns,though i'm not sure if 5 would be required(after all,there's no need to push it around etc).
That makes 2 junior leaders with a 4 strong guncrew.
That's 8 men left;
-captain (senior leader)
-rudderman
-engineer?
-5general sailors,which can become a possible landing party?

3 junior leaders and a senior leader gives a high total of officers though :-s
Top

Could make the SL inferior and the crew green if you are using some as infantry?

Oh and the 5.men guncrew is just to give it some resiliance just like on land. However, nothing stopping you taking off part of the guncrew or all of one to form a landing party.

Alright, what about the following:

Kriegsfischkutter einheit
Kriegsfischkutter vessels were small fishing vessels that got pressed into service by the Kriegsmarine. They were typically equiped with two gun platforms on which a variety of weapons could be installed and typically performed patrolling duties near the coastlines and harbours. These typically wouldn't be found on a table used in chain of command due to the way they were used, especially considering these were not a naval landing vessel, however some references exist during which such vessels came into contact with allied ground forces. One of these incidents occured during the assault on Pegasus bridge, after it was captured by the british airborne troops. It is in the light of such rare occurances this force should be used.

A kriegsmarine kriegsfischkutter was a bit atypically organised when comparing it to platoons normally faced in chain of command.
Rather than having a predefined organisation split into dedicated sections a ships crew in fact represents a single unit.
To represent this loose structure, only the roles and amound of crew are listed above, and is up to the Oberbootsmann to decide how he will organise his men before the boat is deployed to the table. The same goes for the weapon distribution.
Just like within a normal unit in CoC, men can be transferred between one position/section to another by using a single Command initiative. This order can be given by any of the senior or junior leaders.

-Kriegsfischkutter:
As this is a boat, and not the rubber variety, it is quite unique for chain of command.
To represent this the kriegsfischkutter has a couple of special rules described below.


The Kriegsfischkutter is divided into 2 clearly separate sections:
The deck and inside the vessel.
Any troops on deck count as being into light cover.
The deck itself is devided into 3 positions: The deck itself, the front gun emplacement and the rear gun emplacement.
Troops may only move between these positions by using two initiatives, and the normal movement rules do no longer apply.
Likewise, it takes two command initiatives for a section to disembark, provided the kriegsfischkutter is making contact with a bank.

The Kriegfischkutter is the only jump of point the kriegsmarine einheit have.
It must always deploy on the table in water.
In games featuring a kriegsfischkutter there is no patrol phase, simply place the opponents jump off points in a location that makes sense for the scenario you are trying to recreate.

The kriegsfischkutter can only move on deep water, and can roll between 1D6 to 3D6 for movement.
When moving it may only turn with a maximum of 45°.
In order to move, the Steuermann needs to be inside the KFK.
He may be activated on a roll of 1, or if given a command by any of the leaders.
When arriving at a bank, all movement is ended.
If the Kriegsfischkutter is moving on a river, roll 1D3 each phase.
The kriegsfischkutter will drift that many inches with the current.

Troops inside the vessel itself will be treated as if they were inside an enclosed armoured transport with an armour value of 3.
For the effect of hits on the KFK, consult table 12.1
Due to its size, a KFK can absorb 6 points of shock before it is abandonned.
When this happens the crew jumps overboard and swims towards the nearest river bank and foregoes it's complete next turn (no dice are rolled).
Roll on the bad things happen table as if you lost a jump off point.
Only the Maschinist can remove shock from the kriegsfischkutter, as long as he is inside the vessel.
This requires a chain of command dice to be used and per chain of command dice used D3 of shock is removed.

Each of the gun platforms can be armed with a variety of weapons ranging from a lone tripod mounted MG34 to a flakvierling.
To determine how many crew each gun platform minimaly requires consult the consolidated arsenal table and substract 2 models.
Working out a balanced pointing system for this is almost impossible.
We urge the players to try to find a balance between the firepower of the kriegsfischkutter and the force facing it. .

Likewise, if you find any gaps or unclarities when playing with this force simply go for the rule of cool and make up a way to solve the issue in agreement with your opponent.