Did a participation game at the Christmas Market in Antwerp last Saturday. Worked out quite well with just a few changes. Two A7V's against 4 Mk IV (2 Male ,2 Female) 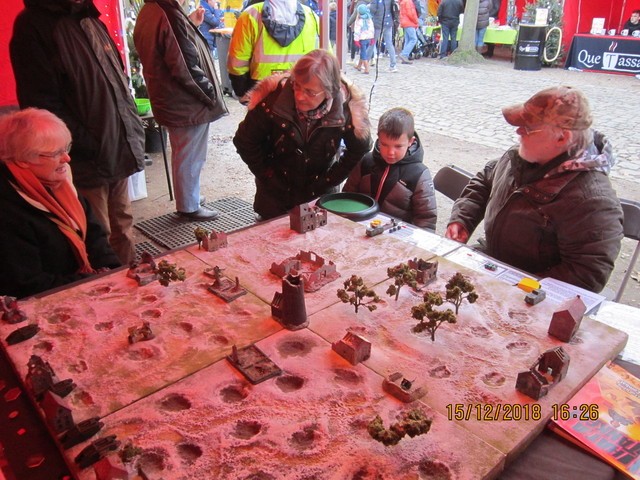 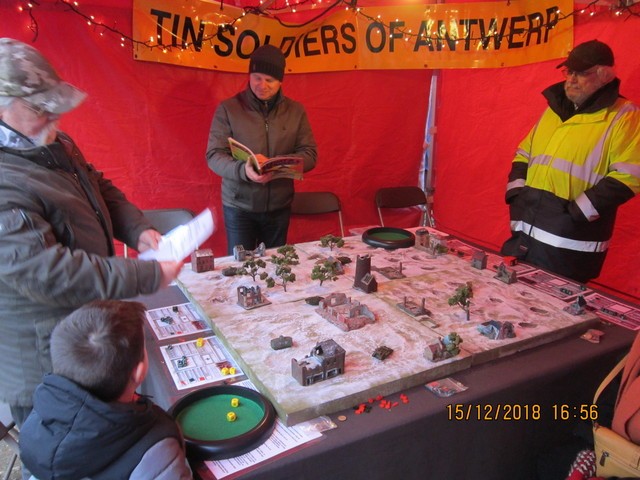 Looks great Willie, if a little chilly! Wonderful way to promote the hobby to the wider public.

Yes, indeed. Market was from 14.00hrs till 21.00hrs. By 19.00hrs it was minus 4. But right across from us there was a stand that served suckling pig sandwiches with garlic or honey- mustard sauce. Delicious and hot! The 3000w terrace warmer also helped a lot...

Still managed to get in about 6 games, mostly with youngsters and oddly enough several ladies.
For the occasion we had simplified the charts with a simple damage track. Once your dice were gone it was game over for your tank. The A7v's in general did better that the MK IVs Males (Same strike, but better armour) The whole game revolved about a German artillery battery that needed to get off the table. If the Germans could manage that before the guns were destroyed they won. Of course the British tanks( especially the Females) tried to destroy the guns as soon as possible, so the Germans had their hands full between protecting the batteries and keeping themselves out of the firing arc of the Males. We gave the Females a Strike 1 that effectively couldn't harm a German tank much. They were deadly against the batteries though with a 4,5,6 ( 24inch range) killing a crew-member making them slower to move and get to safety. Also a successful hit on a German tank by the Mg's ( a 6 on a single D6) threw off your aim.
One MK IV Male brewed up spectacularly with 3 unsaved hits at once, but mostly it was a matter of holding back the hunter-killer Females and then slogging it out with the Males using a much cover as you could.
The full - unsimplified- game has been play- tested several times and works very well.
You can't buy honour.
Top

That looks interesting - would love to see your tank characteristics for the A7V & Mk IV's...

Do you have stats for other tanks such as Whippet?
Jim Masson
https://jacobite-painting.co.uk
Top

We are still working on the stats for other vehicles such as the Renault FT 17, St Chamond and Schneider. We might even sneak in the unlikely LKI and II.
The Whippet has something like 15mm armour, in fact heavier that the big Mk IV and about the same as a Mk V. so that will be a 2 or perhaps a 3. I personally would go for a 2 Armour and let the outnumbering of Allied Tanks do the trick.

Anyway these are the stats for 'our' WWI tanks

Return to “What a Tanker!”