We've started playing GdA at Scimitar Wargames in Coventry and are greatly enjoying it. Well done DB! We're getting the hang of squeezing the most out of the game in a 2.5 hour timeslot, so I've put together a battle report in the only way I know how - 90's White Dwarf. I took the British as Richard Fondler, while my opponent had the French via Marshall LeTruppes. 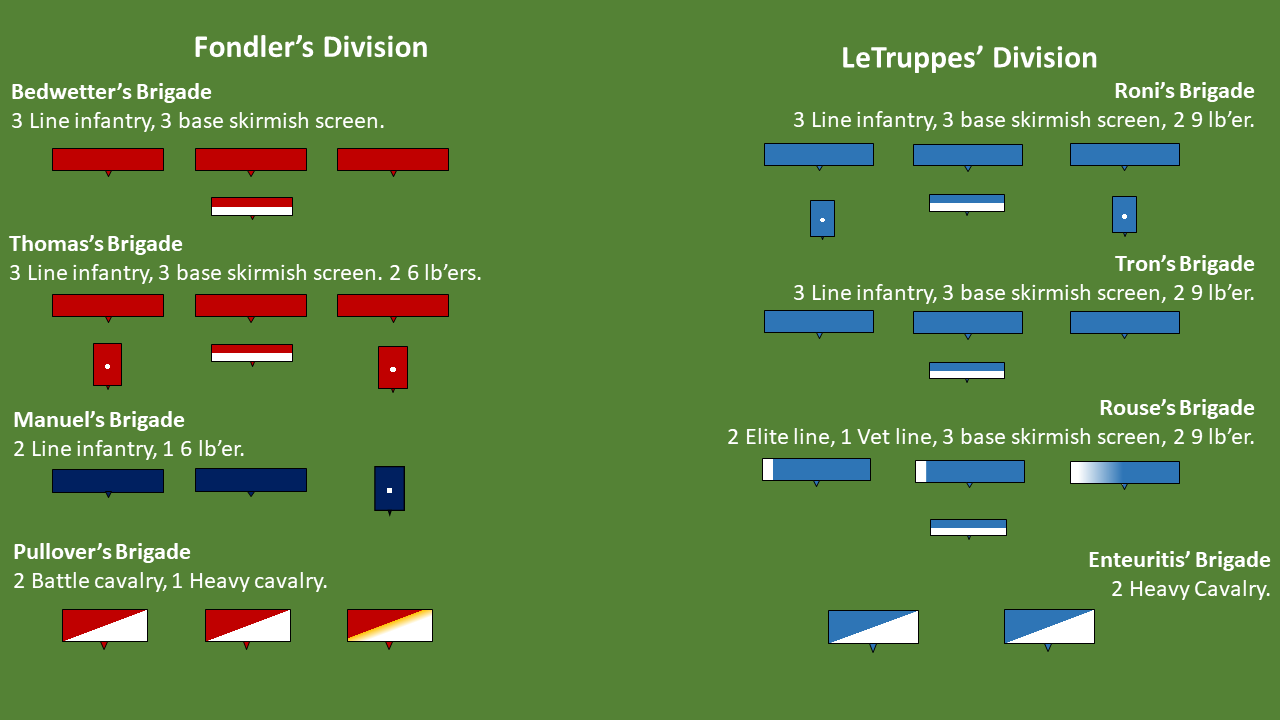 The aim here was to be relatively evenly matched, with variations on either side. Tron actually had some large battalions, but it made little difference in this game and I forgot to add them! There's also no material difference between 6 and 9 lb'ers, but it's all flavour. 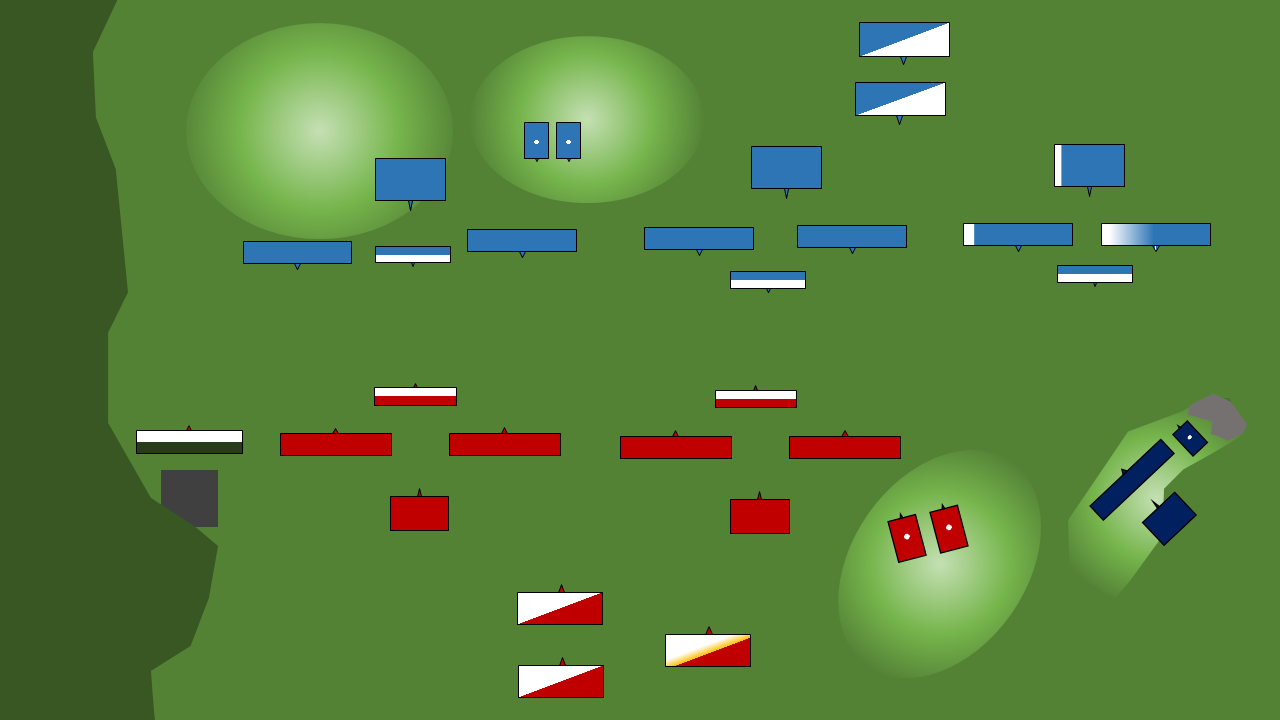 We're playing in 10mm, so we've learned that starting near each other is crucial to a satisfying scrap. Each force had to commit at least 2 brigades to the middle 2 feet of the table. As it was, Fondler's British deployed very aggressively with the French making the most of the hills for artillery. I'd thrown the 95th rifles in front of the farmhouse (grey square on the left) thinking I'd easily be able to fall back if needed. The grand plan was to commit the cavalry to the left early and roll up the flank. This shall hereafter be known as Fondler's Folly. 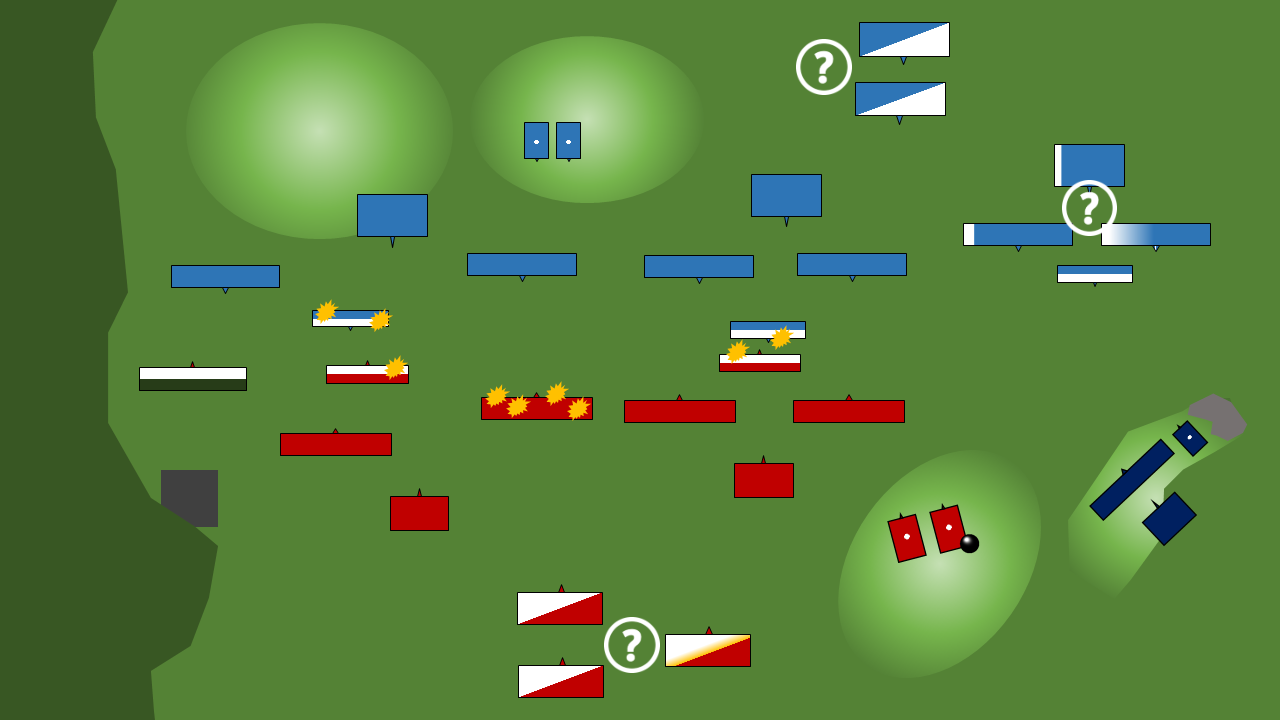 The bugles sound, the drums are beaten, and both sets of cavalry realise they haven't quite polished their helmets sufficiently. Both generals commit their ADCs to beefing up the skirmish fire, with the British gaining a slight advantage. Behind the fire both lines advance, with the exception of Axel Rouse's brigade who know enough to let the green troops soak up the artillery.

The French artillery crashes into the British left, causing significant casualties to the battalion foolish enough to wander just into effective range. Meanwhile Tommy in the British rear realises he's left half of the ammo in his other trousers. In their panic, the Royal Artillery send their rounds well into the distance. 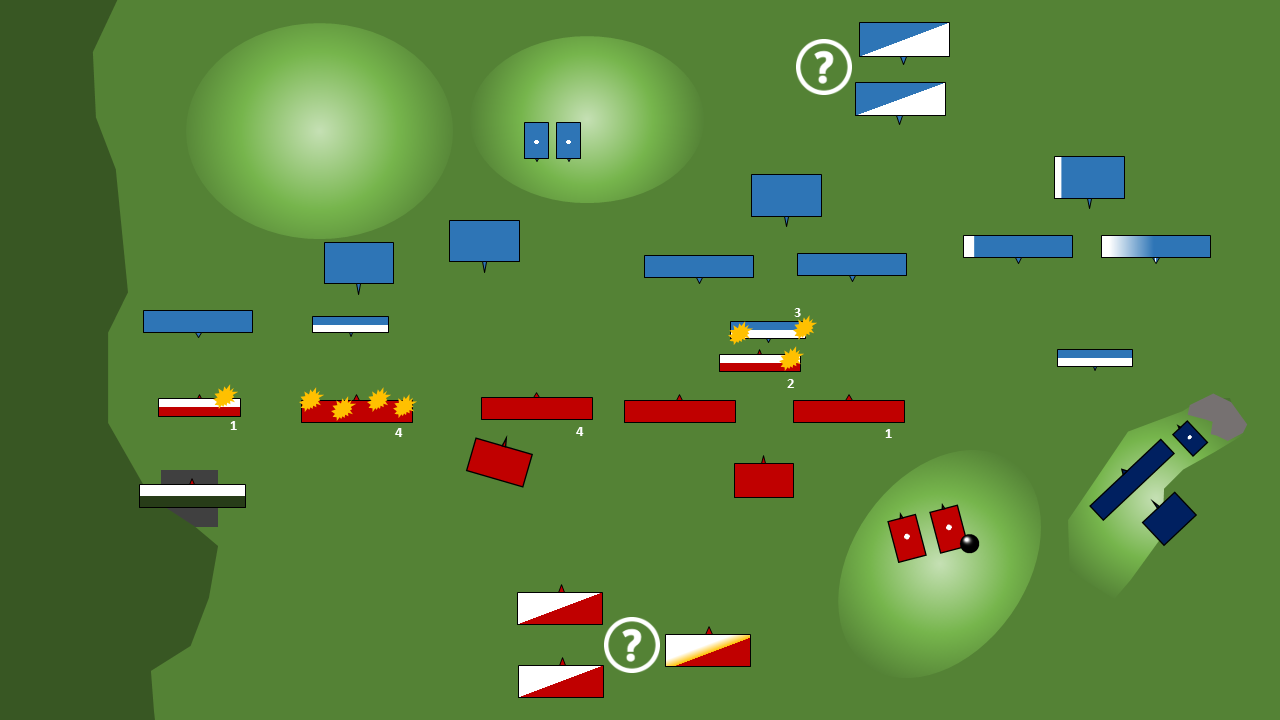 With the bugles taking on a slightly more pressing note, both sets of cavalry now discover disastrous scuffs in their armour. No movement this turn. An annoyed LeTruppes commits his right to an infantry assault on the farmhouse, only to find out they're out of charge range! Fondler has time to react and sends the 95th scarpering into the farmhouse to make loopholes, with the skirmishers covering their retreat. Thinking the left now pinned securely by the fortification, Littlejohn Thomas directs his reserve towards the centre, while his exposed line takes a pounding from the French artillery.

The French continue to advance in the centre, with a startled Fondler choosing to secure the line. LeTruppes pushes his elite troops towards the Portuguese on the right of the field. Tommy lobs some canon rounds into a distant hill. 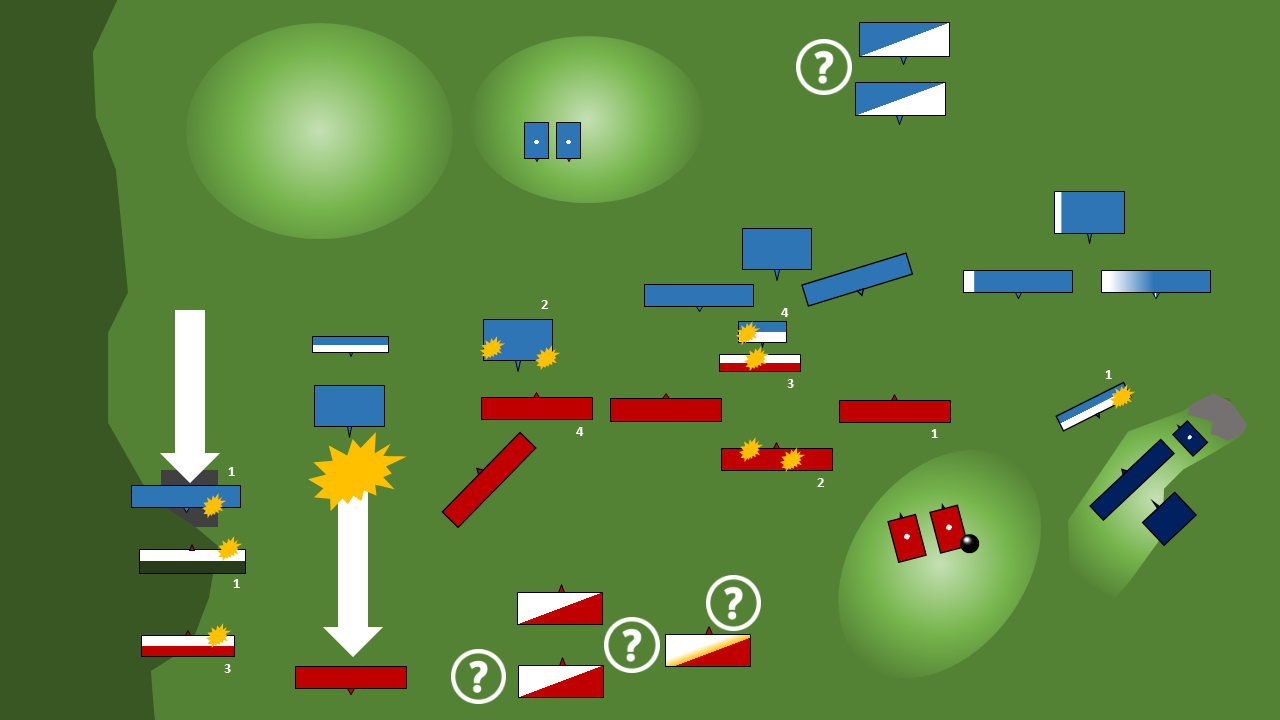 A furious Fondler sends three ADCs to Pullover's cavalry - two to push them forwards, and one to make damn well sure the others get there. The ADCs instead argue over who should hold the letter, and the cavalry practice their huzzahs unmolested. Showing a great sense of fair play, the French horse follows suit.

Meanwhile LeTruppes' right takes the initiative, with one battalion breaking the nerve of the skirmish line before kicking in the door of the farmhouse and evicting the 95th, still trying to set up basic fortifications. Both end up in the woods to the south looking rather sheepish while the French ruin the undamaged south walls to set up positions.

Not to be outdone, Pepe Roni's other brave boys slam into the British line, now thoroughly softened by artillery, and rout them from the field! The reserves have a pop too, but it's half-hearted and they end up trading shots instead. Thomas's reserves are forced to change direction and form into line - Fondler's left has crumbled!

In the centre, Bedwetter opens up his line to allow the reserve to form up, only for them to take a mouthful of shot from the French canon. The British skirmishers get the better of their blue counterparts, knocking a base off, while on the right more skirmishers rush up to harry a nonplussed Manuel. 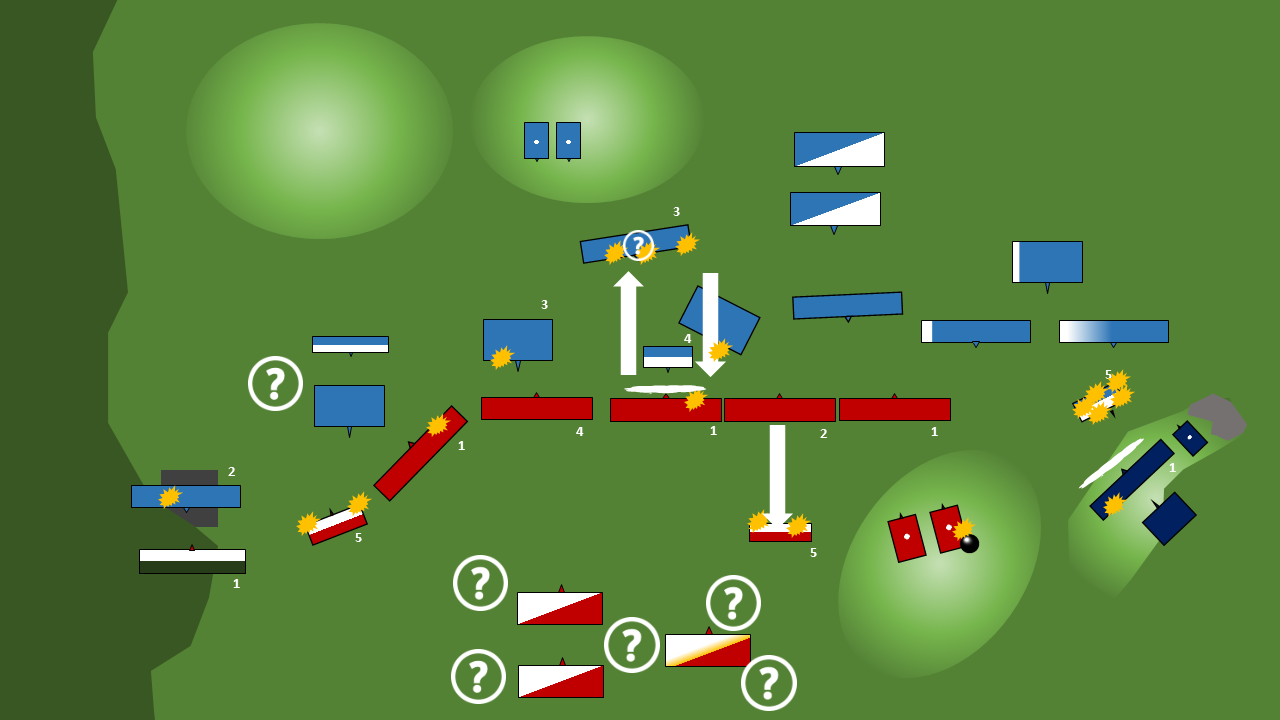 Flush with their victory on the French Right, Roni's boys take a breather, ceding a valuable opportunity to the British. Fondler sends the battered skirmishers back up to plug the gap, with Thomas's reserve even attempting a lackluster charge. The only casualty is a drummer boy, who gets a splinter from his sticks on the way in.

With three ADCs still off negotiating over the last order, Fondler has but one to commit, which goes to shore up the beleaguered centre. LeTruppe slams another infantry assault in, and the french pour through breaking skirmishers into the British line who panic and lose all fire discipline. Confusion reigns in the smoke, and the French somehow find themselves rushing back to the safety of the hill above. Seeing the gap, Brigadier Paul Tron sends the reserve to take positions.

On the right, Manuel's artillery reminds the French skirmishers that one should never get too comfortable around a canon, and the boys are so busy celebrating that they too lose their fire discipline.

With the British line starting to waver, the French cavalry finally finish their breakfast and canter forwards, harried by a pair of ADCs demanding progress. The Cuirassier find themselves with plenty of energy, and nowhere to go - blocked by their own lines!

Sensing their moment to sweep forward in glory, the British cavalry raise a shout and prepare to advance, only to discover that their horses were now really very muddy. Attendants were called over for a quick spit and polish instead. At the Royal Artillery canon, Tommy drops a ball on his foot. 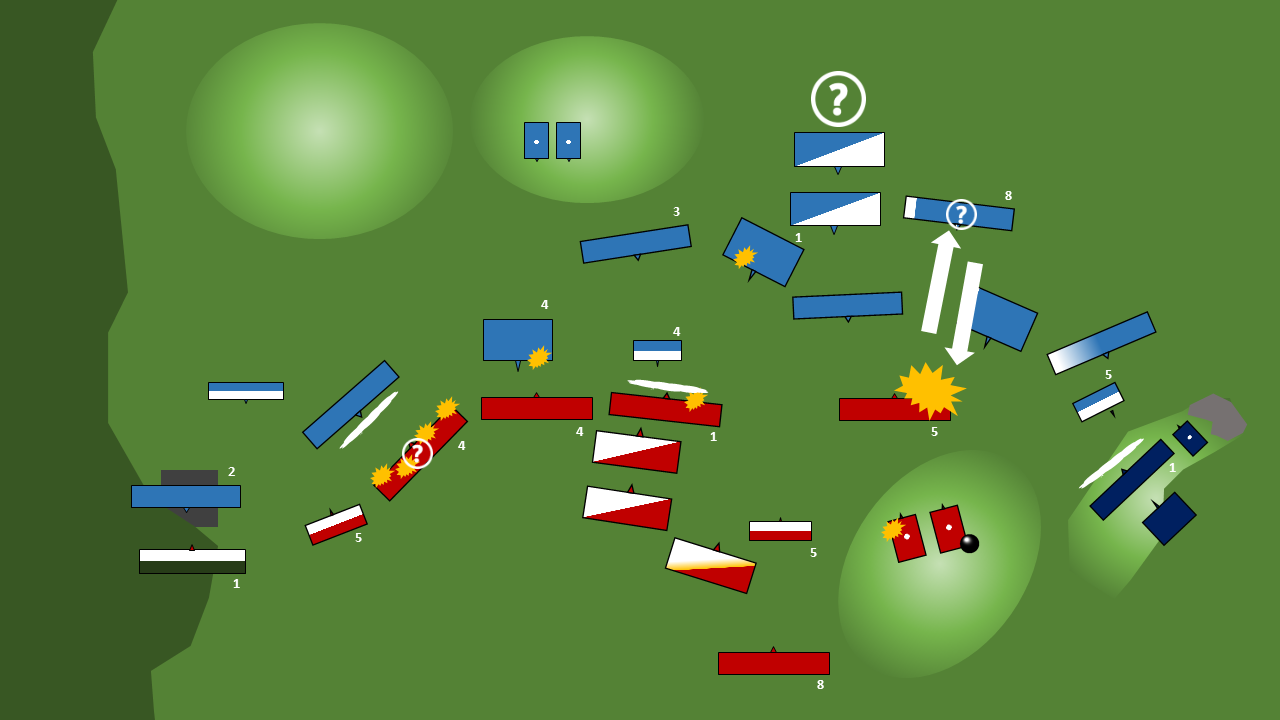 Finally content with the bearer of the envelope the British ADCs reach the cavalry and hooves finally beat earth, and not a moment too soon! As the Scots Greys march forward they are passed by Thomas' centre plunging back towards safety after breaking in the face of French artillery. On the left, Bedwetter's reserve makes another doomed charge [writer's note - I had no idea why I thought this was important] and finds itself disordered with dead all around. Taking no casualties, their French counterparts can't seem to fire fast enough and douse themselves in smoke.

The French regroup in the centre while Rouse sneaks across to charge Thomas' wounded right, only to receive a devastating superior volley from the Colins, who push them back up the field. Manuel's boys are so transfixed that they forget to fire, with neither side making an impact on the right.

Seeing no way to get through, the French cavalry stalls. French artillery, meanwhile, decides to have a pop at Tommy on the hill but hits James instead. 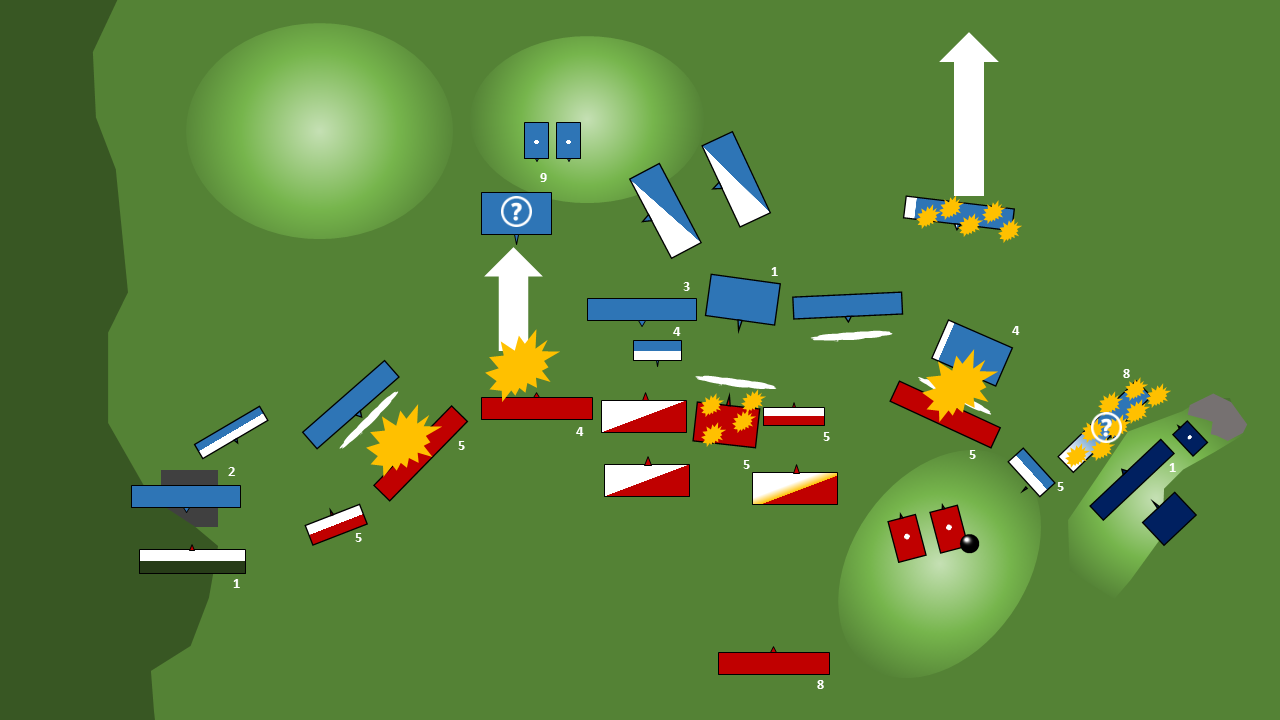 For the first time in the game, Fondler seizes the initiative and sends every ADC he can at 'that damned cavalry'. On the left, Bedwetter weathers an indecisive charge from Roni, while just along the line his boys see off a French charge with a furious counter, disordering the blue menace and snatching any hope of breaking through. Thomas' boys form column to let the horse through, and pay for it with roundshot from the newly formed French line. On the right, Rouse's elite reserve smash into Colin with no effect, while his veterans suffer for failing to charge the hill with a disastrous 8 casualties. Gaping holes form in the line. James and Tommy concentrate their fire on the retreating French elites, routing them from the field.

Sensing the moment was near, the French cavalry moved towards a gap in the line, but with the sun setting would it be too little too late? 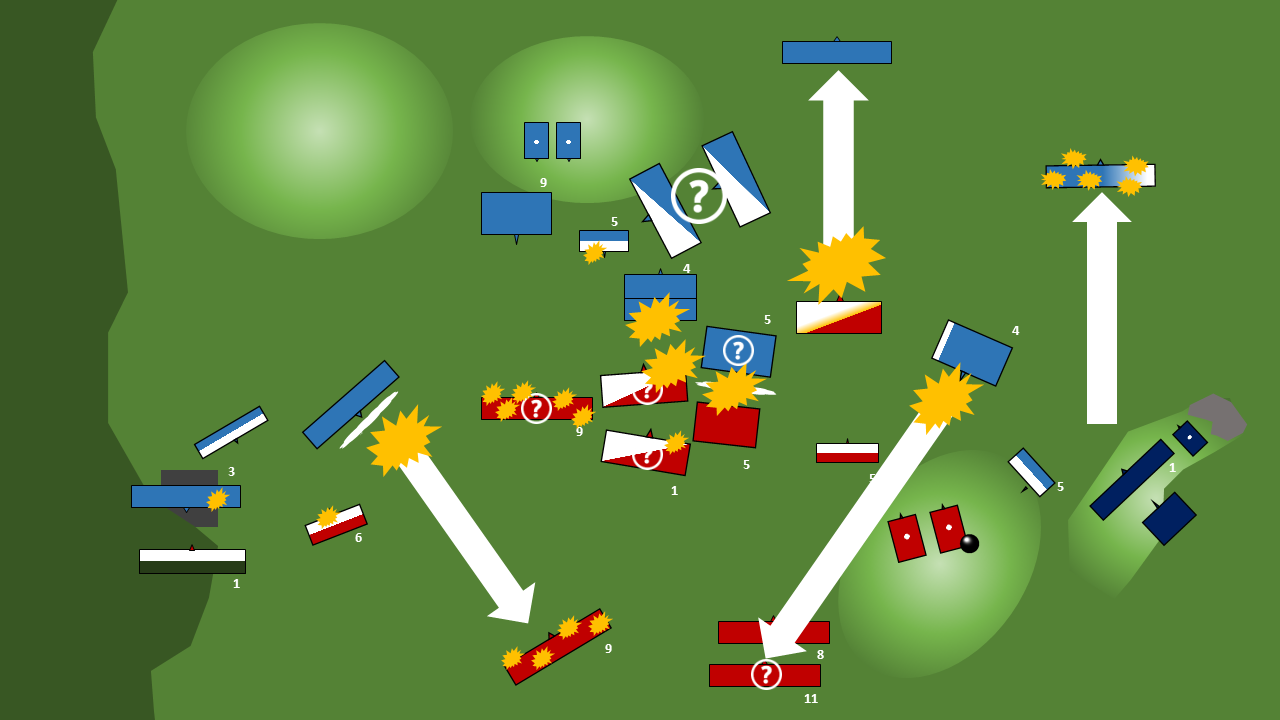 All hell breaks loose. Neither commander has control of the field, but every soldier wants a piece of the man in front of him. Every available ADC is thrown at the British cavalry, with Pullover himself leading the heavies to glory. Bedwetter's reserve comes tumbling back in retreat as Pullover's battle cavalry breaks the French skirmishers and ploughs headlong forward. Tron forms a desperate square and the cavalry are pushed back, only to be overtaken by Tron's reserve who plough headlong into the British centre for a meleé with elan. The french artillery decimate the remains of the British left sending them into disorder, but the Scots Greys are on the hoof! Thundering past the Colins, locked in hand to hand with Rouse's guard, the Scots make such a sight that the French panic in trying to form square and are ridden down en masse!

The French line is no more, but neither is the British. Colin loses his meleé with Rouse's boys and flees for the back of the field. on the right Manuel's artillery packs off the veterans with another friendly canister, and at the rear of the field the French cavalry decides this battle might not be for them after all. 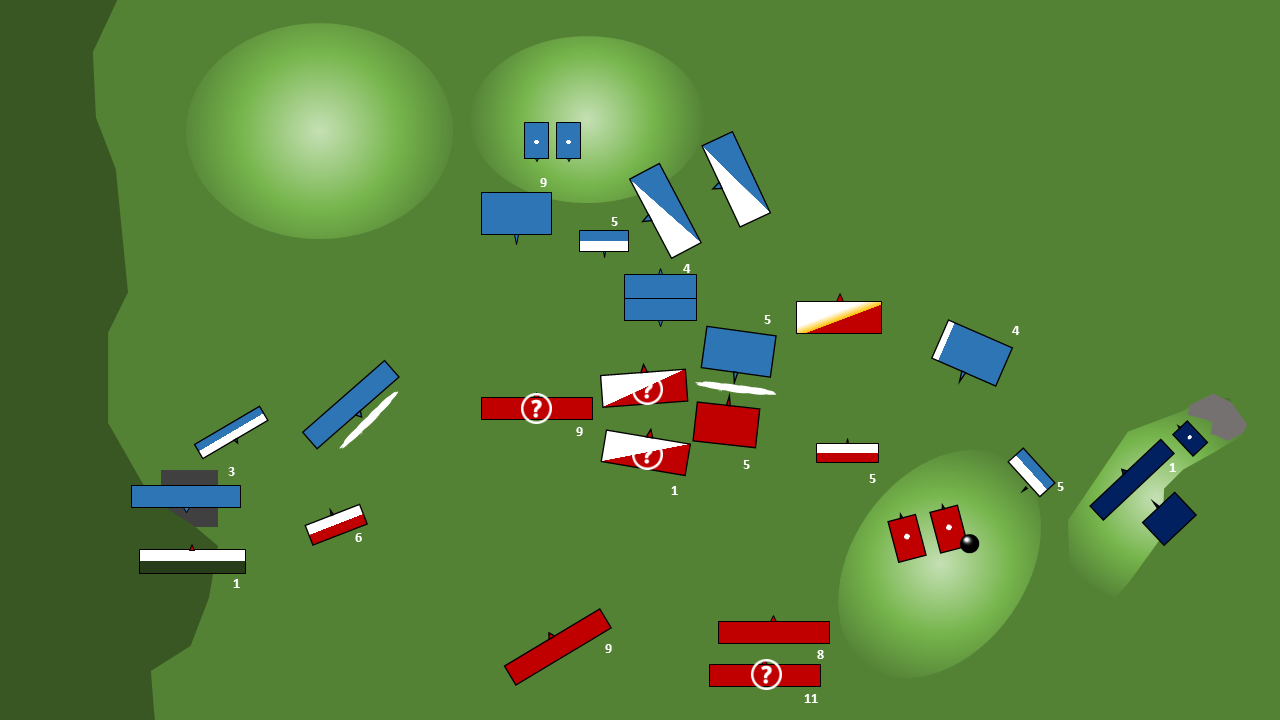 Here's a view of the battlefield at the end of play. No decisive victory for either side, with the French holding field left securely, and the British holding field right. The French cavalry remained uncommitted, but would certainly have taken a charge from the British heavies. The Infantry holding Fondler's centre would likely have been dispersed by artillery or rolled up by Roni.

We both thoroughly enjoyed the game, and I think it shows how much you can cover in 2.5 hours with GdA, especially in smaller scales. Lots of big moments all the way through, especially with that bloody cavalry. We were also pleased to see fatigue build throughout the battle, with fire discipline increasingly evaporating at key moments. Colin's superior volley in turn 5 was also a sight to behold.

This report took an age and a half to make, so not sure when you'll see another one, but what a game!
Top

Great report! Love the graphics as well. Thanks for sharing
Top

Nice report, graphic and humor.
I'd like to see some photos also.

That was really well done, visuals are simple but very clear. Enjoyed immensely.

Love your AAR, thanks for it
Benito
...and visit my blog! http://mylardiesgames.blogspot.com.es/
Top
Post Reply
6 posts • Page 1 of 1