In this context, it is probably worth bearing in mind that (contrary to what many folk fondly believe) Poland was desperately short of military-grade horseflesh throughout the interbellum. For this reason, any opportunity to cut horse establishments was taken and great care was taken to prevent avoidable losses. This meant that horses were never overloaded (the Germans' HF7 horse-killer would have been unthinkable in the Polish army) and also not exposed to unnecessary risk (this in reference to leading more than two horses 'from the saddle' at speed) etc. Ironically, many observers noted that when it came to the crunch, the clapped-out overworked and miserable specimens obtained by way of mobilisation from civilian stocks, seemed to cope much better with the harsh realities of campaigning than their pampered military colleagues.....
Last edited by gebhk on Wed Nov 07, 2018 1:12 pm, edited 1 time in total.
Top

gebhk wrote: ↑
Wed Nov 07, 2018 8:29 am
As a result, it was considered that adding 2-3 men armed with carbines to the platoon firing line, did not justify the loss of manoeuvrability and the risk of losing the horses altogether. Consequently the Poles stayed with the 'triple' organisation and I can recall no examples of greater ratios of dismount than 2:3 from the 1939 campaign. No doubt they did occur in extreme circumstances, but I would suggest this was very much the exception rather than the rule.

Indeed, most Cavalry units in all armies used their steadiest or "best" men as horseholders. Whilst some inexperienced units gave the job to their "bad eggs" reasoning that the better men would be of more use in the firing line, they soon reversed this idea in practice. You had to have steady men as horseholders, otherwise the horseholders and the mounts melted away or they wouldn't bring the mounts forward as required, preferring to hang back.
Top

gebhk wrote: ↑
Wed Nov 07, 2018 9:32 am
In this context, it is probably worth bearing in mind that (contrary to what many folk fondly believe) Poland was desperately short of military-grade horseflesh throughout the interbellum.

Seems odd that they didn't approach the British Army whilst it was "mechanising" from the mid-1930s onwards; as I recall we sold a lot of our surplus horseflesh to the Germans.
No plan survives first contact with the dice.
Top

Contrarius wrote: ↑
Tue Nov 06, 2018 4:23 pm
Still waiting for the First-to-Fight 1/72 Polish cavalry. Have great hopes these will be available by Xmas 2018. Apparently coming in two boxes, one mounted and one dismounted.

Spotted what look like the first production models on the Facebook page of a Polish wargames club closely affiliated with the First-to-Fight company (Pracownia Mikromodelarstwa i Gier Strategicznych Strateg).

Big handsome horses carrying sword- and rifle-armed riders (no lancers). There are also pictures of taczanki but these appear to be scratchbuilt. No dismounted cavalry figures though.

So, seems we may indeed be getting the mounted Polish cavalry pack before Christmas. Hurrrrra!
Top

These are conversions of Soviet cavalry (I recognise Zvezda with the 'fat' bases among others) - indeed the Zvezda's seem to be just different paint jobs rather than conversions. The taczanki are (fairly crude) scratch builds I would guess. SHQ Polish cavalry are a much better bet at present. By far the best 1/72 taczanki are still the old Miltra ones.
Top

gebhk wrote: ↑
Sun Nov 18, 2018 1:55 pm
These are conversions of Soviet cavalry (I recognise Zvezda with the 'fat' bases among others) - indeed the Zvezda's seem to be just different paint jobs rather than conversions. The taczanki are (fairly crude) scratch builds I would guess. SHQ Polish cavalry are a much better bet at present. By far the best 1/72 taczanki are still the old Miltra ones.

Oh, well. Back to the waiting game again! With FtF you never can tell how long anything will take. Lots of goodies in the pipeline I'm told but no idea quite when they'll arrive. I'm quite looking forward to the promised Renault R-35 and Hotchkiss H-35 even though they saw barely any service in Poland: a lot of France 1940 CoC gamers will like them too. Also the Pz 38(t) is apparently not too far down the tunnel.

I generally find the SHQ figures too small for compatibility with 1/72 scale. It's less serious with their AFVs, especially if you don't mix your platoons. As for Miltra – they're new to me: will have to check them out. FtF have made no statements yet on whether they'll be producing Polish Taczanki. Certainly a Polski Fiat "Łazik" jeep is planned for the near future...
Top

To be fair, SHQ figs vary from range to range and, ironically, the Polish cavalry are some of the bigger ones. They are of virtually identical height to the FtF and Fantassin infantry (perhaps a smidgin taller) and much bigger than FAA. I said ironically, because they are bigger than SHQ Germans (the only range I know in metal, suitable for the Polish campaign), while the historical reality was that the average Pole of 1939 was significantly smaller than the average German. Some of the outsize weapons are a bit more of a problem in my opinion.

Personally, I am reasonably happy with my SHQ jobs and, especially going on their previous efforts with the infantry, I'd much rather FtF stick with what they do best, that is vehicles and guns. Though I would rather they do some of the outstanding Polish stuff they promised back in the day, such as the PF 618 (this would make a nice counterpoint to the Krupp Schnauzers as the family, among others, included a cavalry personnel carrier and signals/GS trucks used extensively by motorised cavalry signals units - just so folk can't say I am straying dangerously off topic

) and the PF 518 Lazik (also extensively used by motorised cavalry), which are missing from my collection

, rather than stuff that's been done already many times over by other manufacturers and was little used by Polish forces. However a well-made PF 508 Lazik would be very welcome, as none of the kits available currently are very satisfactory. And, if that leads to the PF 508/18 family (there were at least 9 variants), that would be better still.

Alas, I suspect my desires put me squarely in the non-commercial, minority of one sector

Ok, found Miltra. Or rather found out about it. Seems defunct since about 2005. Shame, as it looked interesting. And I can't honestly see FtF producing a taczanka model before 2020.

SHQ Polish cav does indeed look promising. If the FtF offering fails to live up to expectations I might well go down that path. Also SHQ produce a very nice horse artillery draught team with limber, which I'm pretty sure FtF will never produce. (How long it would survive in a CoC battle is a different question; may be nice for IABSM though.)

Yeah, sad about the SHQ early war Germans being so small. The FtF Germans are singularly poor, and I've been forced to add in figures from Revell and other manufacturers. Still waiting for the new box of 25mm Early War Germans promised by the Plastic Soldier Company for release in "late 2018". Poles of the wartime generation were indeed tiny by modern standards (remember being shocked by how short the surviving veterans were when I was a lad). The officer class were of course often much taller, but not many of them survived the combined attentions of the Soviets and Krauts.

Wonder what your opinion is of FAA Miniatures figures, which I've only seen on their website. They're quite pricey but do look very nicely modelled. Are they significantly shorter than FtF, so short as to be incompatible?
Top

Pity you are not doing 28mm otherwise you could use these 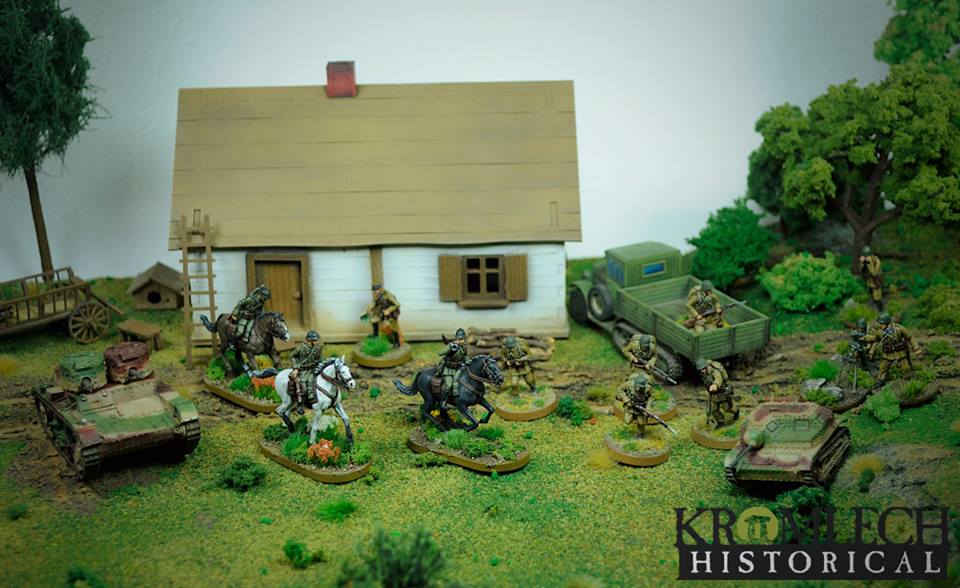 Amen to what you say about Miltra. Although old (70s-80s) and in the style of that period, they render the feel of Polish uniform very well. Plus, unlike most ranges, there are a number of useful standing/walking/sitting figures.

Regarding height, off course the average then was shorter everywhere (even since the 70s, average UK height has increased significantly), however the chronic malnutrition of the majority of the Polish population in the interbellum resulted in many particularly small adults in the ranks.

You need to bear in mind that even in 1/76 the SHQ limbers seem underscale, particularly in terms of width. They should fit three men sitting comfortably on them but these manage two at a squeeze. The nags too are very small. However, if it's cavalry guns you want to model, the HAT Putilovs come with a perfectly serviceable limber and a simple conversion of the Putilov guns will produce a convincing wz 02/26 - the appropriate weapon for the horse artillery.

I once found some fabulous, fabrique en France, resin 1/72 Schneider 18976s. Nice chunky artillery horses, guns, limbers and caissons (that can be modelled open or closed). Unfortunately I only got enough to build one gun team, didn't keep manufacturer details and never seen them since. Doh!!! AlBy make the best (in my opinion) 75mm Schneiders in 1/72 and, if memory serves, they also make limbers though no horses etc to go with them AFAIK.

The FAA Polish cavalrymen are noticeably smaller than their SHQ counterparts and there are numerous inaccuracies. However, since humans vary in size, as a quick glance down a high street will show, I don't have a problem with the occasional shortie in my ranks and there are some interesting figures in the range (the saluting NCO for example).
Last edited by gebhk on Mon Dec 10, 2018 7:27 pm, edited 2 times in total.
Top
Post Reply
78 posts