I note rules for the various "funnies" that modified tanks from about D Day on. But there is no cost for Up(?) grading one's tanks to a "funny" such as a flail tank. Nor do I see them mentioned in any of the Pint Size Campaign books. I have a perfect application (I think) in a 29 Lets Go campaign, a replay of Flanking at St Germain. The Germans are strengthening their defenses and, having lost a Marder in the first game, he has 2 points of support. I expect him to place two minefields across my one entry point for my 2 required tanks, denying me of 12 points of suport. A flail tank entering the mine field from off table may be the answer.
Dick Bryant
Top

I didn't think that the Americans used them, other than DD tanks. And if it's a campaign, I think your support choices are limited to what's specifically on the support list.
But if available, I'd probably charge an extra point for it, like an engineer team.
Peter
Top

Peter wrote:I didn't think that the Americans used them, other than DD tanks. And if it's a campaign, I think your support choices are limited to what's specifically on the support list.

That'd be what I thought, too. "Denial" of entry points with minefields is a commonly raised issue, IIRC - might be worth a hunt through the forums for comments on how to get round it.
Mike Whitaker
Blog: http://troubleatthemill.blogspot.com/
Podcast: The Miller's Tale (see blog)
Club: http://www.peterborough-wargames-club.org.uk/
Top

The USA did use mine-clearing tanks but in very limited numbers. They designated the Sherman flail as the T2 Flail (other variants were developed in very small numbers) but also had T1E# Roller mine-clearing variants, with the huge T1E3/M1 Roller (Aunt Jemima) being the most common (all of a couple of hundred being built).

Unlike the British, these were not employed during OVERLORD but were adopted a little later and were used from Autumn 1944 during the drive to the Rhine and the initial push into Germany.
Top

If I recall right Rich has previously confirmed that if your opponent tries to block the only road onto the table then your tanks are at liberty to come on somewhere else along the baseline, just as they would if there was no road.

Keep in mind that tanks do not need to come on along the road, regular tanks can enter within 6" of the road entrance which we measure from the road edge rather than the middle. Stops these shenanigans since a minefield is only 6" wide.

Your opponent would do better to place his minefields either side of the road so that your tanks are obliged to move along it where they could be sitting targets for any AT weapons he can deploy.

As for points costs for the funnies, you wouldn't really see them outside of a very specific historical scenario, so they don't really need to be costed up.
Tiny Hordes
Top 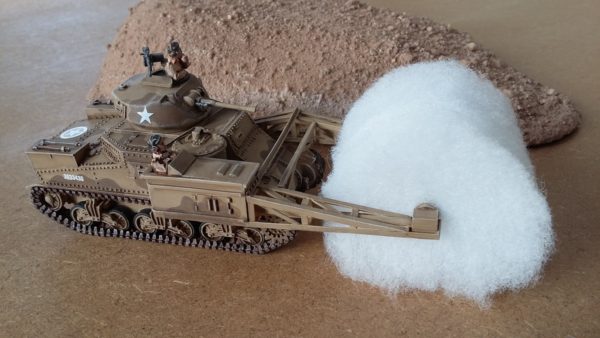 Got a Sherman crab with a working flail too...
Top

Probably should work out some costs and add them to Neals arsenal? The AVRE is in there and maybe the Croc but not the others IIRC.
Top

Got a Sherman crab with a working flail too...

Is that's what meant by being an old buffer?

(Also, that appears to be a Grant flail. You need to give it more points in Disguise skill.)
Top
Post Reply
22 posts