I have a question about troops advancing in Open Order.

In the rules under the section on Unit Integrity on Page 7 it notes that "for a soldier to be considered part of a Unit, be that a Section, Squad or Team, they must be within 4" of at least one other soldier...."

This suggests that when advancing in Open Order troops could be spaced at 4" intervals, meaning that a full strength British 10 man section could advance in open order across a 36" frontage, which seems excessive. Based upon the Ground Scale being 12" equals 40 yards, then that would suggest that figures should only be spaced at ~1" intervals for Open Order (i.e. about 10 feet apart).

So what would people regard as a reasonable spacing for advancing troops in Open Order?
Top

Not excessive. It's all within the bands of sensible behaviour.

12" to 40 yards gives a 4" spacing of 13 yards. British infantry training gave open line at 10yards, or 3" spacing, but acknowledges that troops tend to bunch.

It is very rare in the game to see troops being moved at anything like as much as this spacing. Probably the most ignored rule is 8.2, where players advance in multiple ranks, the rear rank firing through gaps of less than 2" in a front rank.

A sensible commander in the game will drop to 2" spacing at the joins between teams so that unit cohesion is maintained when casualties are taken. 2" to maintain this, up to 4" fits pretty well with the training if the time.
Last edited by OldNick on Sat Aug 15, 2020 5:48 pm, edited 1 time in total.
Top

Thanks OldNick for the response and the reminder about Rule 8,2. I am looking forward to trying that out.
Top

OldNick wrote: ↑
Sat Aug 15, 2020 10:42 am
It is very rare in the game to see troops bring moved at anything like as much as this spacing. Probably the most ignored rule is 8.2, where players advance in multiple ranks, the rear rank firing through gaps of less than 2" in a front rank.

I think this is quite the hidden pitfall, as it can lead to really dense concentrations of firepower with little restriction. In my experience "stricter" play in this regard makes movement more valuable, because positioning and flanks are more important.
Top

I agree that there is a tendency amongst players to bunch their figures. Rich has confirmed a number of times that Rule 8.2 does not apply to members of the same Team, who are assumed to be alert to each other’s location, but to firing close to members of another unit.

The tendency to use double ranks of figures usually arises when playing with 28mm figures whose bases take up a disproportionate amount of table space, usually equivalent to 8-10’ per man. Advancing with a 1” gap Between figures is equivalent to a spacing of around 18’ between men.

I’ve found that bunching is less of a problem when playing with 15mm figures which are a closer match to the groundscale.

"...bunching is less of a problem when playing with 15mm figures which are a closer match to the groundscale."

This. The effect of terrain is also improved = how many guys can fit behind this wall?

Tangent: To spice up solo play, I've taken to rolling casualties within a team to determine which figure, exactly, is KIA. This can have the effect of putting a team's surviving figures more than 4" from the others in the section where the shock cannot be shared. A flivver, but a twist to liven up the 'I control everything' flavor of solo play.
Top

One thought. Players often bunch up their figures because there is no incentive not to. Historically a bunched up unit was frowned upon because it increased the chance of casualties, yet in CoC that same risk does not apply. If the chance of receiving more hits was increased by bunching figures then players would soon find a way to spread their figures in a more historical fashion.

The challenge is to come up with a rule that is simple and unambiguous. Some rules use blast templates and I wonder if there is something to be had by drawing on the concept of the covering fire rule whereby if the ratio of figures to frontage exceeds a certain value then the hit number is modified in some way? I’m no rules writer though and there’s a real danger of opening a can of worms that requires additional rules and exceptions.
The Tactical Painter https://thetacticalpainter.blogspot.com
Painting little soldiers for tactical battles on the table top
Top

I agree.
We have blast 'templates' (variable size) for our mortars and tje number of dice rolled is per 2 men under template so bit incentive not to bunch there.

However against things lIke MMG bunching up should be deadly but isn't unless you count only those in LOS as being targets but even then its not quite the same as you are talking about Mark.
Top

In the rules or not, play what looks good. Two inches apart always works for me. The more natural look of the top photo or the Napoleonic battle style of the bottom one. I know which i prefer 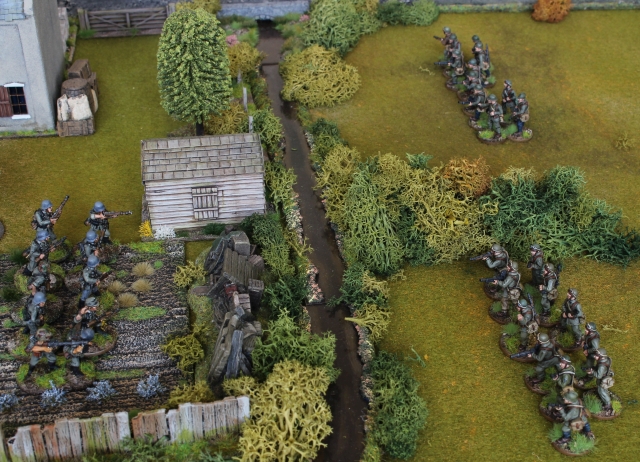 This. It's a shame way there's no easy way to include things like enfilading fire in the game. The way hits are distributed also means that things like HE don't have the same effect on bunched troops as it does in real life.
Tiny Hordes
Top
Post Reply
13 posts