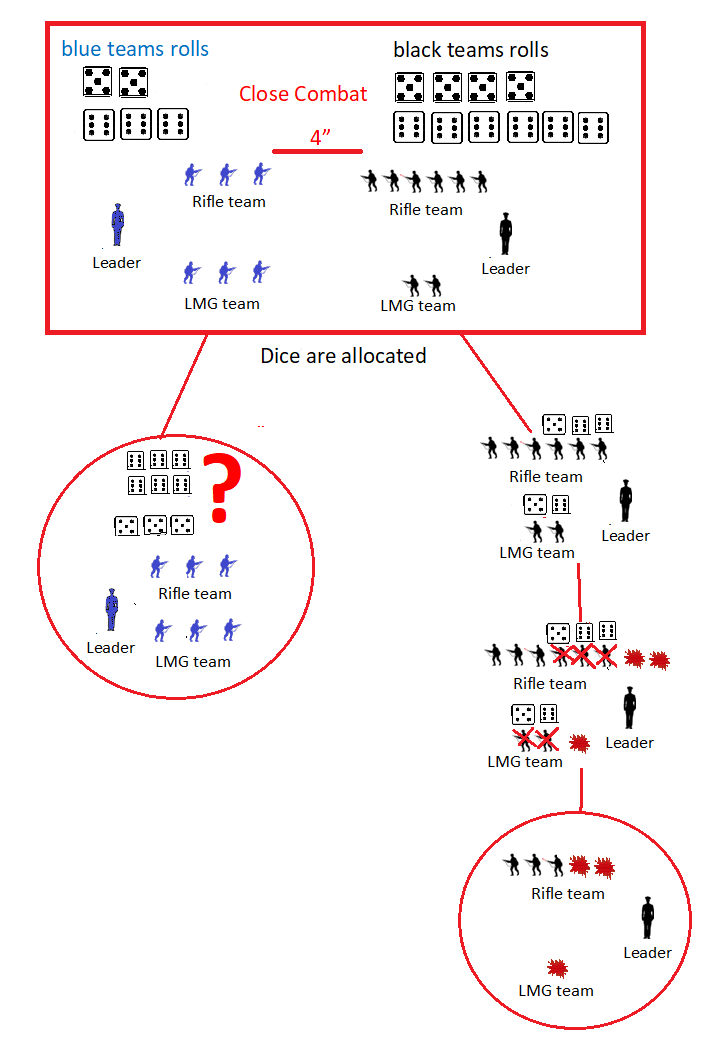 Need clarification for allocating of dice in Close Combat.

Black team:
Has moved into contact with the Blue team and initiated Close Combat.
Both teams have rolled their dice after following the Close Combat table 15.
The Black team has suffered 5 x D6 dice , 3 x 6's and 2x 5 dice.
The Black player allocates the 2 x 6's to each team while the odd 6 is allocated by his opponent.
The black player allocates the 2 x 5's as there are no odd hits.
The Black player now rolls to see if the Leader suffers a hit instead of one of the troopers. He rolls a 6 on a D6 so the leader is not hit.
Since the LMG team is wipe out the shock it has is removed and BTH rolls for team lost.

My questons:
1) if the black player rolled 1 to 5 the Leader would be Hit instead of one of the troopers, Who decides and which team member remains with his team the Rifle or the LMG team?
2) Is this the procedure people follow when allocating dice to their teams?
3) Or do you first allocate all the kills remove the figures and then add the shock on the remaining figures?

A1: the black player would decide which man is "saved" by the hit landing instead upon the leader (see: the second paragraph of the example under section 9.1.1. Section 13.1.3 for Close Combat says to use the same method as for firing).

A2: I would certainly allocate the dice in the same way. It seems consistent with: "If multiple Teams are involved, casualties are spread equally between them with the opponent deciding which Team is allocated any odd hits." (last paragraph of 13.1.1)

A3: No, I certainly wouldn't do that.

A4: 6 of those kills will wipe out both the rifle team and the LMG team. I would then roll for 3 hit results on the leader (which he could, in theory, survive by being repeatedly 'stunned' - although he would then surrender under the 'Defeated by 4+' rule).
Use the Consolidated Arsenal! It's here:
https://docs.google.com/spreadsheets/d/ ... E/htmlview
Top

#3: Not to my knowledge. Losing a team is harsh enough, and shock is lost with wiped out teams normally.

#4: Since there are as many hits as figures including the leader, all figures are hit. The teams are of course wiped out, with the leader suffering all remaining hits.
Top

The six men all die, then the three remaining hits go on the leader. Make three wound rolls on him, applying the sum of that. Chances are he's dead, but you might get lucky and he'll just be wounded but still alive. In campaigns, where a leader is the only survivor of an assault but is knocked unconscious we rule that he's a POW.
Tiny Hordes
Top

RE No 4
I agree with the others that 6 x men die and the remaining hits go onto the leader. Which in most cases would kill him. However, I would like to suggest a slightly difference “PROCESS” in getting to that number. This process would enable us to be consistent between all the casualty numbers.
Basically, we need to be consistent when there are 5 or 6 or 7 etc casualties. (the issue is what we do with 6 and 7 Casualties). Assume that there is a full section/squad and they are NOT all wiped out for this case.

With 5 Hits : This will have the leader being hit on a 1-5. If the leader is hit it means 4 x Men dead and 1 x Leader Casualty Roll. If the leader rolls a 6 then he is not hit and there are 5 x Men killed. No hassles all simple really.

With 6 Hits: This is where the complication arises. Here the leader is hit on a 1-6 (so auto hit). The leader takes 1 of the hits and there are 5 x Men killed.

With 7 Hits: Here we need to keep the same “PROCESS” that was used with 6 Hits and then “Add” the Hit. Like this … The first 6 hits are resolved as for 6 Hits (this keeps it consistent which is important). So, this would see 1 Leader Hit (automatic) + 5 Men Killed. There were 7 hits so this leaves 1 hit. This should be dealt with as normal; Leader is hit again if he rolls 1 on a 1d6. Otherwise there is another 1 x Man killed. The end result can therefore vary; Must (for the first 6 hits) = 5 x Men Killed + 1 Leader Roll. Then Variable (for the additional hit) = 1 x Possible Leader roll or 1 x Man Killed.

This process means that the casualty allocation remains consistent whether there are 5, 6 or 7+ casualties. It is slightly more complicated but easily applied.

Unless of course the leader dies on the first roll, then I woildnt roll again for the 7th hit, unlessthere is a second leader within 4"......
Top

I think the key to keeping it consistent is to resolve the "hits" in batches of six. It is slightly more complicated but it keeps true to the proper distribution of hits … regardless of how many.

Actually I agree Steve ....it does need some consistency
Top
Post Reply
8 posts • Page 1 of 1