Setting up a table for Chain of Command

Setting up a table for Chain of Command

I've had a copy of CoC for several years now, but I've barely had a chance to play. I just recently found some local gamers and, inshallah, will be getting a chance to actually get some games in soon! I've read the rules, watched the TFL videos on YouTube, as well as other playthroughs including Richard's guest appearances at OnTableTop, so I feel I've got a good grip on the rules. I have collected and painted some soldiers and terrain, focussed on 1st Canadian Division in Operation Husky. I've been recording my progress on my blog: https://willstoysoldiers.blogspot.com/

What I'm looking for now is any recommendations or guidelines for setting up the table. I've seen that some gamers sketch a map on a sheet of paper, and set the table to match. Is there a good place to find sample tables or maps that I can crib from? I'm looking for ideas like how much of each type of terrain, is there such a concept as "too crowded", what size should I be looking at for fields, orchards, etc, how many buildings. How much is enough?

Any advice or suggestions gratefully appreciated!

Welcome to the forum

I suggest having a look at one or two of the pint sized campaign booklets available from the Lardy website. Packed with heaps of interesting material plus a number of battlefield layouts. Well worth the very reasonable costs.
Thanks, Matt
The Wargames Table
Top

Thanks, Matt, I will do that.
Top

Also have a look at this Tiny Hordes page with quite a few community-made PSCs, many of which are freely available for download, with scenario/table maps and guides (including one for Sicily '43).
Capt Fortier

I recently ran an Operation Husky scenario at two different gaming conventions. Here's a picture of the table I set up for it (in my kitchen when I was playing it with my son): The scenario was a "Delaying Action" from the main rulebook, with the Italians trying to hold back the American forces' breakout from their landing areas. As the board is flat, it would represent something still on the coastal plain. My thinking was a key road junction, or something similar.

This board had fields (soft cover for troops who are stationary, but no cover if caught on the move), an olive grove (treated as an orchard, so soft cover, but which was wide enough to block line of sight across it), stone walls (hard cover), 3 buildings (hard cover, one of which was multi-story), and a vineyard (each line of vines providing soft cover, but recall that firing across 3+ elements of soft cover gives you hard cover). The vineyard was tricky, because unless you're shooting across lines, it's actually open terrain - which posed an interesting tactical challenge. The Americans had only one road entrance for vehicles, but the Axis forces had two - one of which was within line-of-sight of the American road entrance, the other of which was not.

This scenario was played a total of 5 times (two at each of two conventions and once at home) and all five plays through it were completely different, based largely on the Patrol Phase. The heaviest fighting generally took place in and around the olive grove.

In general, when setting up a board for a game one of the key things to consider is movement, specifically what kind of terrain each force will have to cross to accomplish their objectives. For the most part, one side will be more defensive than the other (and thus tend to move less), but if you can put in terrain that chops up the lines of sight in the middle third of the table, you will encourage both sides to have to move - either to advance to contact or to bring the attackers into their line of fire. CoC is pretty much always better if the terrain can keep the action from devolving into a static firefight.

In the table pictured above, I wanted to give the American forces a challenge by making their likely deployment points on their right flank liable to end up in the field, though a couple of plays saw aggressive patrolling that allowed them a JOP far enough forward to deploy either at the edge of (or in one case actually inside!) the olive grove. For those that ended up not advancing so aggressively, much of the early action was essentially a "push" to use weight of numbers to get a foothold in the olive grove. Most people recognized the vineyard as a death-trap, but in one game the Italians tried to deploy forward into the vineyard to make an aggressive defense/counterattack and got held up exchanging fire with Americans behind a stone wall near the little manger. All of the games were very back-and-forth, and over the 5 plays it was Americans 2, Italians 2, and one that was basically a draw (the Americans probably would have won, but we were out of time and both sides were teetering at about 3 FM).
Top

As a very general guideline, do not put in major terrain features that run parallel to the table edges. What happens is that one side ends up seizing one of these key features. The other side then ends up lining other terrain features and then the game devolves into a die rolling contest. If you put them at an angle (as seen in Munin's arrangement above), it becomes harder or less convenient for one side to seize an entire terrain feature.

Another guideline for beginner games is to not position a key terrain feature so that it provides an unobstructed view of all approaches. With experience, you can deal with these things, but for beginners, it's better to provide a covered approach or two for part of the distance to encourage movement rather than shooting.

Finally, make sure that you include enough LOS blocking terrain so that there are lots of opportunities for JOPs to get far enough onto the board.
My blog: http://littleleadwarriors.blogspot.ca/
Top

I've had a copy of CoC for several years now, but I've barely had a chance to play.
Will

glad you are getting the chance. I too had a copy for years, but only recently (last two) got a chance to play regularly. I would say that the best way to lay out terrain is to try to replicate the historical prototypes. In Normandy and densely populated parts of Italy for example there were short lines of sight and lots of intervening terrain like hedges, boundaries, embankments outbuildings and so on. In Russia and the desert it was more about undulations in ground. As long as you are aware that very open terrain favours the defender and support weapons like HMG, tanks and artillery.

If you read through some of the AAR, especially by The Tactical Painter, and Tiny Hordes, you will get a feel for the terrain from the pint sized campaigns they are fighting through.

Agreed. You can see it a little better from this angle, but the windows and doors of the buildings that face the direction from which the Americans are approaching don't actually give unobstructed lines of fire except down a single lane of the vineyard; approaching from that direction affords at least light cover: 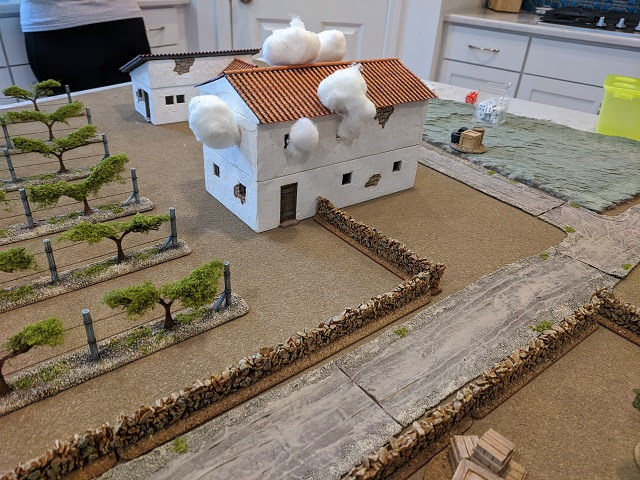 And when a random event lights the building on fire, well, you don't even get that!

Also, I was OK with putting the buildings firmly in the Italian side of the table because I knew the American force would include two Sherman tanks. As at least a couple of new players found out to their dismay, buildings are death-traps once you throw HE into the mix.
Top

Thanks for the suggestions, everyone. I've got my first 'proper' game coming up on Sunday, hosted by my friend (it will be a Blitzkrieg 1940 scenario using his French and Germans). Hopefully it will get me some good ideas for when I get a chance next month to set up a game with my own toys. In the meantime, I've been studying Farley Mowat's 'The Regiment' & 'And No Birds Sang', plus Dancock's 'The D-Day Dodgers", Zuelke's 'Operation Husky' and any other histories I can get my hands on. Plus studying GoogleStreetview all across central Sicily!

The PSC scenarios look to be good examples of how to take the campaign histories and build them into game scenarios.