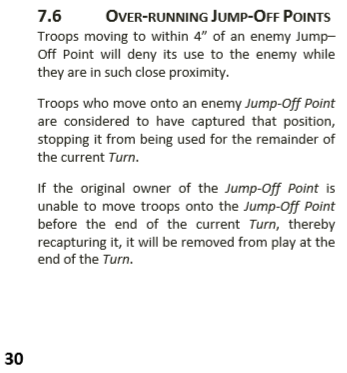 Am I reading this right?
Troops that move onto a enemy JOP class that JOP as captured for the rest of the current game Turn.
Does that mean that those troops may now move away from that JOP and it remains captured for the rest of the game turn.
If the enemy player is able to get some of his own troops onto that JOP to change its status? otherwise it will be removed at the end of the Turn.
thanks JOhn
Top

I have always played it that they need to stay on the JOP intil the end of the turn. So have always used the play a CoC die to end the turn ASAP tactic.

But I could be wrong as it does.not say that explicitly,

Move on to it, and it is captured. Now the previous owner cannot use it unless they recapture it with troops on the table. You can move on, but it remains captured unless the original owner recaptures it.

Whole captured, end a turn. It is removed, it is no more, it has ceased to be. As TT says, the usual practice is to end the turn as quickly as possible after capturing it, to make sure if removal, but sometimes this is not possible, and occasionally this is not desirable due to the other effects of ending the turn.
Top

Like TT I have always played it that an enemy unit needs to remain on the JOP until the Turn ends for it to be captured. So no moving on then off again.

Yes though rereading it I can see JB's POV
Top

That is not what is written.

Of course, if you don’t leave troops on it, the risk of it being recaptured is much higher.
Top

If the enemy make contact with your JOP you won't be able to use it for the rest of the turn. If you haven't recaptured it when the turn ends, it goes poof and you make a morale roll.

However, what generally happens is that the enemy move onto a JOP and immediately end the turn by burning a CoC dice. If you're manoeuvring to capture a JOP you make sure you've got a CoC dice in hand.
Tiny Hordes
Top

The wording is ‘...are considered to have captured that position, stopping it from being used for the remainder of the current turn’.

It’s in the past tense, ‘to have captured’ not in the present tense ‘to be occupying’ or similar. They have done it - there’s nothing to suggest they must continue to do it.
Top

With the idea of a JOP being as far as is safe for enemy troops to go, and a place where enemy troops might actually be, I think it makes sense that a unit visiting that space has scouted that spot and revealed it to be enemy-free at the moment. So I think you have to remain if you're within 4", but once you're actually at the designated spot, you've captured it, and the end of turn just means it is long enough that you're sure there aren't any of the enemy sneaking around.