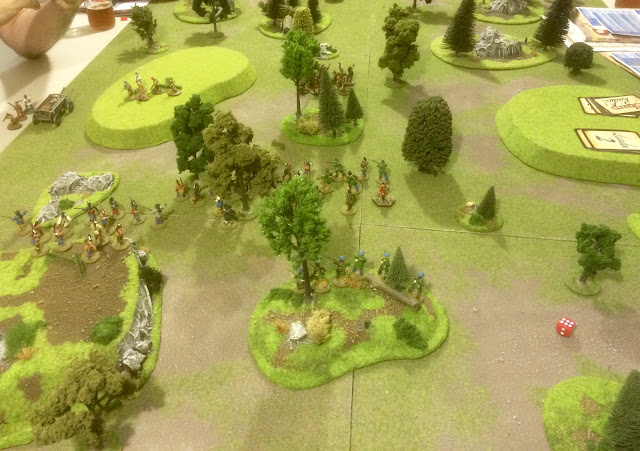 We had our first game of FIW SP last night and it went quite well. I again refereed and both players were unacquainted with TFL rules in general but with were very well acquainted with the FIW rulesets and history.

We played the Escort Scenario, with the English being the escorting force and the French being the attacking force. The French were the Raiding Party from the rulebook (49 points corrected) and the English had a made up force of 3 Status II leaders, 2 units of Colonial Rangers and 2 units of Indian allies (48 points). For supports the English increased 2 of the leaders to Status III and took a holy man. The French took a second deployment point and a mobile deployment point as well as elevating one of their leaders to status III.

The English started in sector 1 and had 2 free moves, while unfortunately the French ended up in their sector 4. The starting morale for the English was 11 and for the French 9. I believe we got through 4-5 card decks before the French morale failed. One thing noted was that the tiffin card ended up near the bottom of the deck in all the turns so there was a lot of card play.

We really had no problems with the movement, firing and fisticuffs mechanisms and were able to use the unit characteristics and card functions without difficulty. The game was quite smooth and both players enjoyed themselves. A few questions though, maybe quite simple answers but they came up. 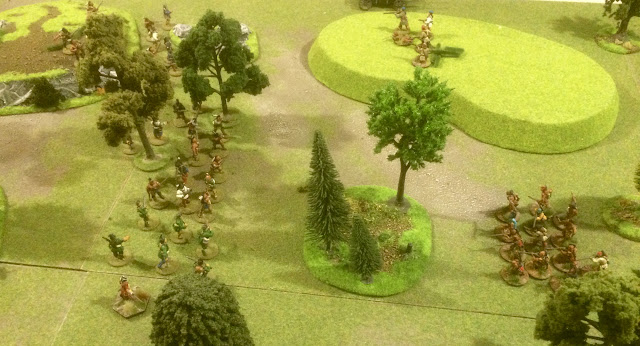 Questions:
Actions: Each CI gives 2 actions, can you do fire and reload in that order.
Routing Units: Once routed does a unit move or is it just stuck there until a chapter ends.
Running: Each CI gives 2 actions, if you select 2 move actions can you add a d6 for each and take 2 shock. For Light infantry and skirmish units this means that a 2 action move could be 5d6?
Stepout: A unit has 1 command card step out requirement, can you use 2 command cards to get 2 d6.
Tomahawks: A unit attacks another unit, they have the Tomahawk trait so throw for it, the amount of shock caused the unit to fall back because of excess shock. The units were 12" apart to start, the attacking unit had 18" of movement, because of excess shock the unit being attacked fell back 4" not enough to escape the attacker, we presumed that Fisticuffs still would take place.
Force Morale Test: I am presuming that when a group is force to withdraw because of excess shock, this is the 1st line in the "Bad things Happen Table"

Comments:
As noted above both players are well versed in the FIW (one is from Quebec and one from Vermont, so it is in their DNA). I noticed a lot of online chatter about the treatment of Indians in SP.
Why are the French allied Indians Poor Shots and the English allied Indians not. This seems very odd even to me. The French had been giving Indians black powder weapons for some time while the English were banned from doing so.
Why is it that Skirmishers and Light Infantry benefit from light cover when being shot at and the Indians do not?
Why are the French CdB limited to only one unit in a force while the English can have more then 1 unit of Colonial Rangers. 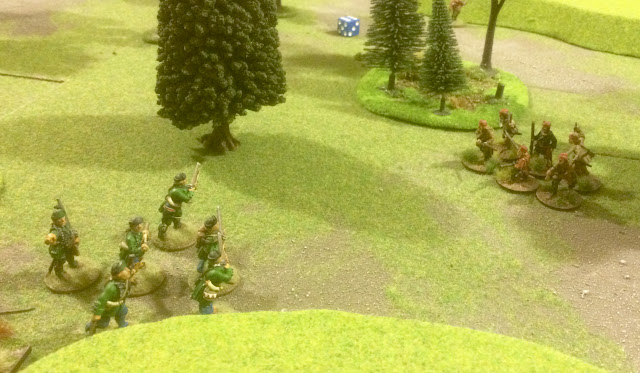 Anyway it was a fun game, look forward to the next.

As to the 1st three questions.

Actions: Each CI gives 2 actions, can you do fire and reload in that order.
Yes, or reload and fire if you start unloaded and it takes one action for you to reload.there are other options depending on what state of loaded your groups are, (e.g. Present,then Fire, Load and Present, move 1D6 then fire, etc.)

Routing Units: Once routed does a unit move or is it just stuck there until a chapter ends.
You can still try to Rally it. It can still move and shoot but with the two times shock as figures left, it may be difficult. If a broken Group suffers further
Shock or men lost, this withdrawal will be repeated, even if it is in the same Turn. So they are pretty much useless until you can Rally enough Shock off them

Running: Each CI gives 2 actions, if you select 2 move actions can you add a d6 for each and take 2 shock. For Light infantry and skirmish units this means that a 2 action move could be 5d6?
Don't think you can use Running for Skirmishers or Light Troops. The rule for Running specifically says it for "Line" Troops. The "Running" is all ready built into Skirmishing and Light Infantry movement who get an additional free 1D6. The Shock incurred for Line Troop Running reflects that they are not used to moving as fast as Light Troops are. Also, I believe Running only gives you one extra D6, not one per Action so most you could move in one Turn with Running would be 3D6, Same as for LI & Skirmishers who would move 3D6 without Running and incurring no Shock.

None of the above considers any extra movement that one might possible get by using Command Cards.
Top

I agree with bandersnatch's answers to your first 3 questions.
On Step Out it has never occurred to me that you could try to activate that option more than once in a Turn, but I can't immediately see anything in the rules to prevent it.

Tomahawks, yes the defender might fall back but if the attacker still has sufficient move left he can use that to complete the charge and enter Fisticuffs.

Yes, withdrawing because you have received excess shock from firing or fisticuffs is the first line on the Bad Things Happen table.

As to the composition of the Army Lists, Rich has emphasised that these are only intended as guides and that he is not an expert on all of the periods covered by the rules. What you have is his take on these forces and you should feel free to adjust both the Force Roster entries and Force Composition to reflect your own research or that of your friends.

For French Indian Allies being classed as Poor shots, I don't know what Rich had in mind but I have surmised that it is a reflection of the poor quality of weapons and powder available, not their availability or familiarity of use. It really makes very little difference when using Indians as Tribes.

Indian allies are classed as Tribes so are Mass Troops not Skirmish Troops so don't benefit from the cover benefits which Skirmish Troops get. This may reflect a perception of how they were employed when used as allies, but I don't know. However, some of us have suggested that you should have the option of fielding Indians as Skirmishers which would attract the cover benefit.

On the limit on Coureurs des Bois, I presume again that this reflects a view on their availability, but you could always change that for a specific scenario.
John
Top

Thank you both very much, I am relieved the only major error we seem to have made was allowing non-line troops to run, I completely missed that.

We did have a discussion last night about the fact that the lists are written as guides and that all TFL rules have a certain flexibility built in. For both players this was their first TFL game (well aside from the playtest of GBCoC), I think they both appreciated that and would modify the lists somewhat especially for the allied Indians. Certainly they are both much more expert than myself.

There's an article in the forthcoming Summer Special on the 1790-95 war between the U.S. and the Ohio Indians which includes some of my suggestions on how Indians might be represented which may be equally applicable to the FIW, AWI, 1812 campaigns as well.
Top

Something else occurred to me subsequently thinking about your question on using the Step Out ability more than once, you will find with more games that the Command cards are a precious resource to be used with care. It's a constant challenge to assess when you would get the maximum tactical benefit from them. So it would really need to matter to spend another Card to gain an additional 1D6 of movement.

Also you might want to take a look at taking a Scout/exploring officer as support since he comes with a free secondary or moveable deployment point. It's a good way to reflect one side having greater knowledge of the local terrain. Very characterful for FIW games.
John
Top

I will look forward to seeing the summer special.

The Step-out question just came up during the game, I suppose using 2 command cards to get 2 extra d6 would be quite an heroic gesture.

As you can guess from our game we really scratched the surface only of the ruleset. The great thing about TFL games is their depth and SP2 seems to have no end of that. I will have a look at the exploring officer.

One thing - you get 1 dice of movement per move action; two move actions means two dice - not 2 x 2 dice.
Running (or being light troops, or using Step Out) gives you an extra dice - so 3 dice.
You could move with 1 action (1 dice) and fire (or reload) with the other.
Top

John
As I myself play Sharp Practice during the French and indian War I'd be very interested by your adaptations and impressions on Indians and their use. I'll compare the two versions, tribe or light infantry and see also for myself. I'd like to find a way to identify some warrior types from others, such as mission Indians, stockbridge rangers, or specific tribal qualities like famous hunters (apparently the case with Abenakis), reputed scouts (Delawares and Catawba) and the like. We could exchange experiments if you like.
Philippe
Top
Post Reply
11 posts