Moved to the correct forum. /Mod

This morning Collonello Chiarimonti dispatched my company with some reinforcements to investigate a position north of our line of march. Intelligence reported that there was an enemy formation in the vicinity. I am happy to report that by force of Italian arms, we have repulsed the enemy armor and shattered their infantry.

Our scouting forces consisted of a Company of Infantry supplemented by two machinegun teams and a battery of anti-tank guns.

Below is an aerial reconnaissance photo of the battlefield looking down from the Soviet side of the field.

With a patch of woods in the center the Italian half of the table was dominated by a ridge that ran from left to right. On the Italian right was a stream that ran across the table. There were two muddy dirt tracks that crossed the stream - one on either side of the area. On the Italian left was a stand of woods that would be occupied by the Soviets for the entire game.

The Italians took the field sending out small scouting teams on either flank (dummy blinds). The infantry was dispersed across the line with the Anti-tank guns on the center right. The anti-tank guns were to establish a position on top of the ridge line with an excellent view of much of the battlefield. While in most cases Caporale Andretti was a magnificent driver, he had some difficulties with the snowy terrain. Upon cresting the ridge he encountered difficulties stopping and ended up at the base of the ridge on the far side. (I forgot to declare that he would stop at the ridge before I rolled and achieved one of the best movement rolls I have ever had. Lesson Learned.)

Upon reaching the bottom of the hill, the anti-tank guns were immediately spotted by Soviet units. 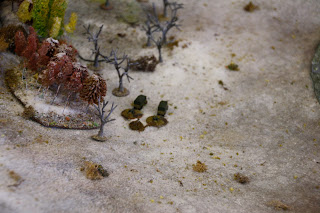 The Soviets began to move and we noticed that they concentrated their efforts on the Italian Left which was substantially weaker than broader line that the Italians had chosen to deploy on. Our forces spotted some tanks almost immediately. 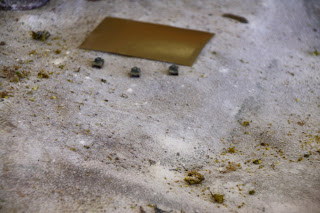 Immediately behind the tanks were more units but we could not clearly make them out due to the snow and debris kicked up by the Soviet tanks. Fortunately these were only the T-37 tanks and not the T-34 monstrosities that we were warned about in Romania.

What concerned us more was the deployment of troops in the woods nearest the run away anti tank guns. The Vehicles immediately came under fire. Fortunately the fire was none too accurate. 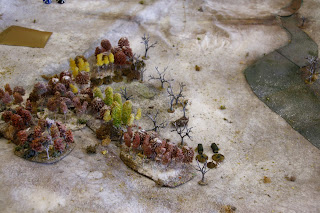 The primary concern was to not loose the anti-tank guns with Soviet armor close at hand. Our third platoon was spotted by the Soviets and began to received some unwanted attention. 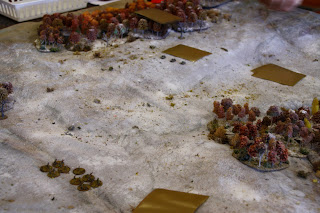 We positioned the Forward Observer on top of the hill. 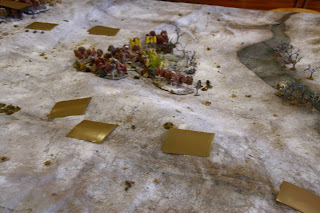 In record time he had provided some relief to our troops and called the most accurate mortar barrage on top of the soviet armor with pinpoint accuracy. (In all of the games that I have played IABSM I have never gotten such a lucky run of cards that allowed me to call in artillery where it was needed and when it was needed and hit the target on the first try. A miracle I tell you.) 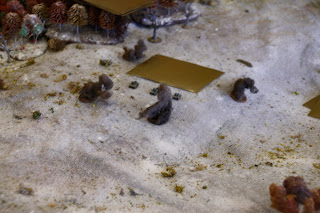 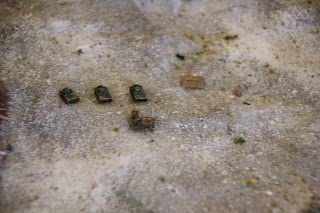 The T-37 proved to be far more menacing than we initially believed. The fast tanks made the most of their mobility and were largely able to emerge from the barrage unscathed. The first platoon of Italian Infantry was spotted by the Soviets as they sent the T-37s to turn the Italian flank. The exposed third platoon was able to run for cover of a gully near the woods and managed to avoid any casualties. 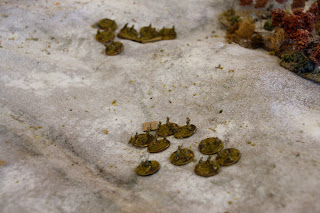 With the First platoon taking the focus of the T-37s now that the 3rd platoon found cover, the first Italian casualties are taken. The Sottotenente leading first platoon took a mortal wound leading his brave men out from the hail of Soviet machine gun fire. (I needed anything above a 1 on a d10 and I roll a 1. It figures.) The only thing slowing the Soviets was mechanical failures. (They failed several vehicle breakdown checks throughout the game.) If the tank platoon had managed to stay together, the Italian position would have been much worse. 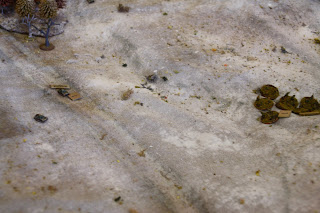 To ensure that 1st Platoon made its way safe, the attached machine gun team stayed behind and engaged the tanks in a furious duel. Meanwhile more soviet troops deployed on the Italian left. 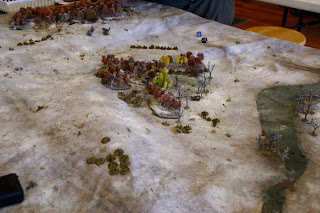 The platoon leader of 3rd platoon saw a glorious opportunity. He inched his way forward along the ravine and with a cry of Avanti Savoia, charged into the recently deployed Soviet troops. Killing a large number of the enemy, including the Commissar that was attached to the unit, the 3rd platoon completely broke the Soviet platoon, sending the few remnants scattered to the winds. The toll on the Italians was heavy as well and left the Italian platoon isolated from relief. Third platoon found itself isolated and cut off. With a shout of "Uhraaaah" the Soviets ran from the woods and assaulted the tired 3rd platoon. In a fight that left many of the enemy dead, the young sottotenente surrendered the remnants of his command to preserve his young soldiers lives.<P> 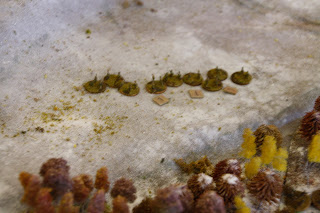 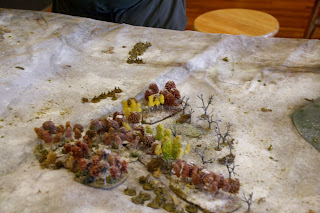 As can be seen in this reconnaissance photograph, our men being taken into captivity. This did relieve the pressure on the Anti-Tank gun teams as these were the troops that had been firing on them as they slowly turned around to head back up the ridge. Meanwhile, the isolated machine gun team kept up its duel with several of the enemy tanks. The forward observer attempted to contact the mortar battery to adjust the fire but to no avail. The machine gun team actually stalled the tanks for quite a while until one of the tankers in a last ditch effort charged the machine gun and ran the team to ground.

The team's heroic efforts provided the time needed to get the anti-tank guns in position to drive off the Soviet armor. Revenge was had on the tank that crushed the machine gun team when after three shots, the team finally managed to place a direct hit on the attacking tank. 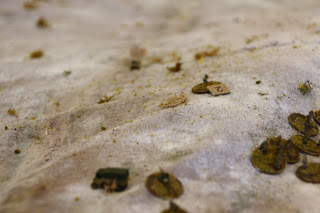 This picture was taken by one of our combat photographers attached to the anti-tank gun crew. The company headquarters was able to link up with the first platoon and reestablish order since the loss of their platoon leader. Under my direction, the remaining machinegun team, the headquarters team and the first platoon moved through the woods to launch an assault on the remnants of the Soviet infantry. 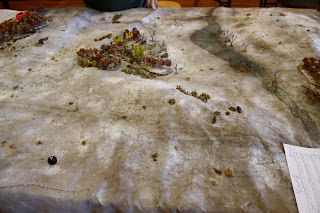 The Soviets in the open were down to two reduced squads. With great difficulty, the Italians moved through the woods to launch their attack. Movement proved nearly impossible for most of the troops and only the machine gun team was able to get into position to fire upon the Soviet infantry. The machine gunners managed to fire a few shots and caused one casualty before the Soviets began to flee in terror from our forces. (OK, it was really an orderly withdrawal but hey, this is my account. Doug can write his own.

The Italians did not have everything their own way however. The Soviet tanks had moved rapidly to a covering position and began to fire into the woods and drove back the machine gun team to allow the Soviets to escape. (The fast tanks were just that - fast. Doug did a great job keeping these tanks moving and in action. They were a real thorn in my side.)

Our Forward Observer spotted a concentration of enemy infantry in a tree line across the map. He began to adjust his targeting to bring the mortar battery to bear on these troop. 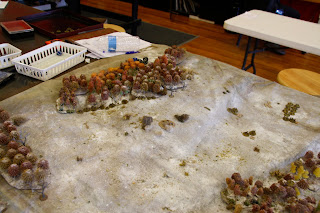 End Notes:
At this point the game ended. The Soviet player (Doug) had to leave. The game did not play out as it did in my play testing at all. However, it was great fun. The Soviets were hard to control as they were poor troops and poorly lead. A full platoon remained in the woods the whole game and never fired a shot as did a machine gun platoon. The Italians were in better shape leadership wise. At this point, I think the Italians had taken the field. The mortars would have started coming down near the woods where the infantry was and they would have been forced to pull out. The Italians lost an entire infantry platoon and one machine gun team. Plus they lost the officer to first platoon. The Soviets had two badly mauled infantry platoons. The Italians won but it was a costly victory and close to a draw. 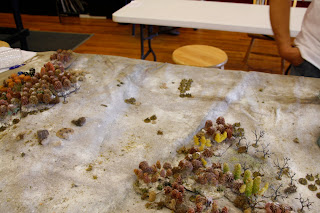 The game was great fun as always and Mark did an incredible job with the terrain. Thanks Mark. The scenario was "An Unexpected Encounter" from Campaign 4 scenario 1 of In the Name of Roma. For more information on the supplement, please check out my blog: http://cstoesen.blogspot.com/2013/09/in ... eased.html.
Chris Stoesen
No matter where you go, there you are -- Buckaroo Banzai
Nil Facilis Est
Top

Since it was a nice 85 degreees out it seemed appropriate to do a Russian Front early winter game from Chris's new book.
I really enjoyed the game also, Chris. This is a good meeting engagement scenario. Pretty even units and no real terrain advantage. Even though this is one of the games with the least amount of background info to work with it is very interesting and will play different every time.
Mark
Top

Nice looking table and enjoyable report, thanks for posting! What scale are those miniatures, 10mm?
http://blog.audatia.org
Top

They are 6mm. The Italians are Adler miniatures. The Trucks are GHQ, I think. Mark would have to answer for the Soviets.
Chris Stoesen
No matter where you go, there you are -- Buckaroo Banzai
Nil Facilis Est
Top

The Soviet infantry are Adler also. The T37s are Scotia I think. Not the greatest I'm afraid.
Top