Well I thought as I had been enjoying everyone else’s AAR’s I better have a crack at writing one myself.

Gembloux Gap is a name to strike fear into any German platoon commander heart!

Perhaps with a bit of luck we could attrite some French defenders and make it easier to shift them in the follow up attacks (3 to 4 attempts seem to be the norm). Judging by other commanders previous attempts this was the best we could hope for.

So with only 10 support points we ignored expensive options like Stukas / Mortars etc and went for some Motorcycle recce and a 75mm iG, oh and Alphose the French Speaking Brandenburger! 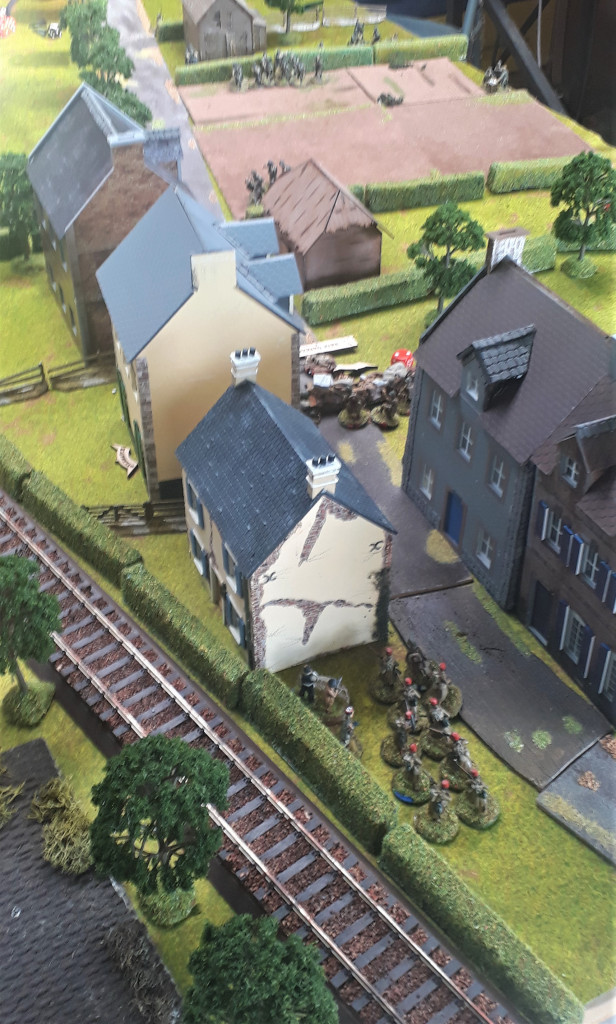 The French appear to have brought their own motorcycles – perhaps we could have a race?
We could hear the distant rumble of tracks, Oh-Oh perhaps we could get in quick and get out before the R-35’s arrived….

So with a fairly good patrol phase we had JOP’s on both flanks about halfway up the table edges and one in the middle – the French appeared to be grouped around the centre of town as you would expect.

Some good first phases and a couple of double phases saw the Germans push ahead quickly. The Motorcycle troops raced down the road and on the railway some more infantry crept along keeping a wary eye on the house windows for the signs of the enemy. Even the Infantry gun set up on overwatch with a good view of the centre of town.

The French finally reacted. Red fezzes popped up of a hedge and the wheat field was scythed – luckily the German infiltrators were keeping low – in fact they were digging little scrapes for the buttons on their uniforms so they could get closer to the ground!
A street barricade unnoticed by the rapidly advancing Germans erupted with rifle fire on the main road and the ominous shape of a French tank appeared at the end of town. 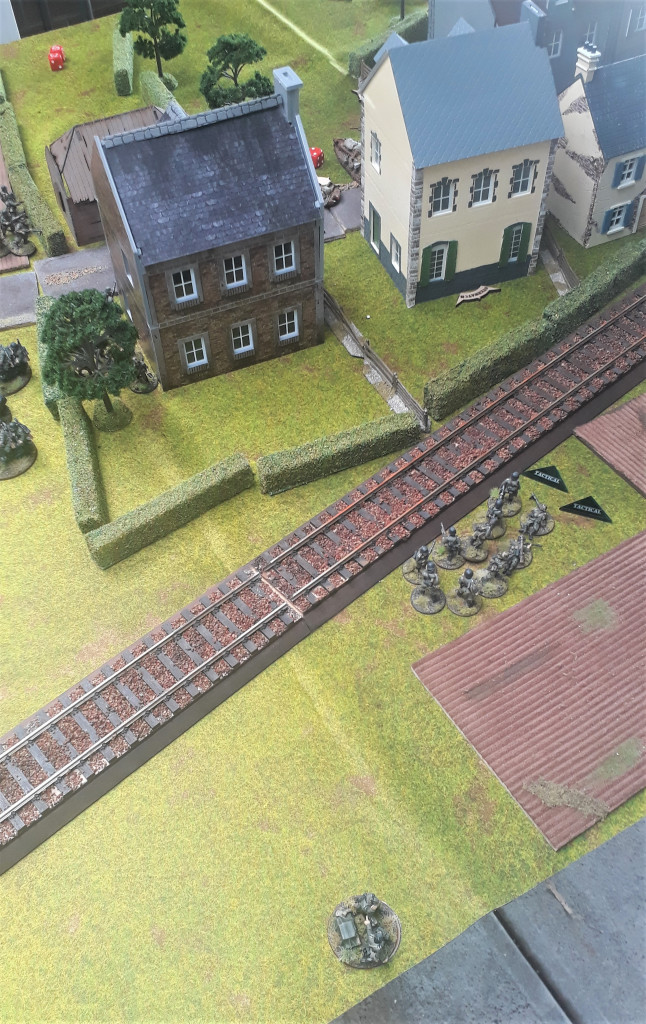 The Germans light mortar, 75mm gun and reserve infantry opened up causing death and shock on the exposed Frenchmen despite their entrenchment. The leading German troops took cover behind buildings to either side of the road and awaited the arrival of the Senior Leader, Leutnant Michael von Schoenenfeld 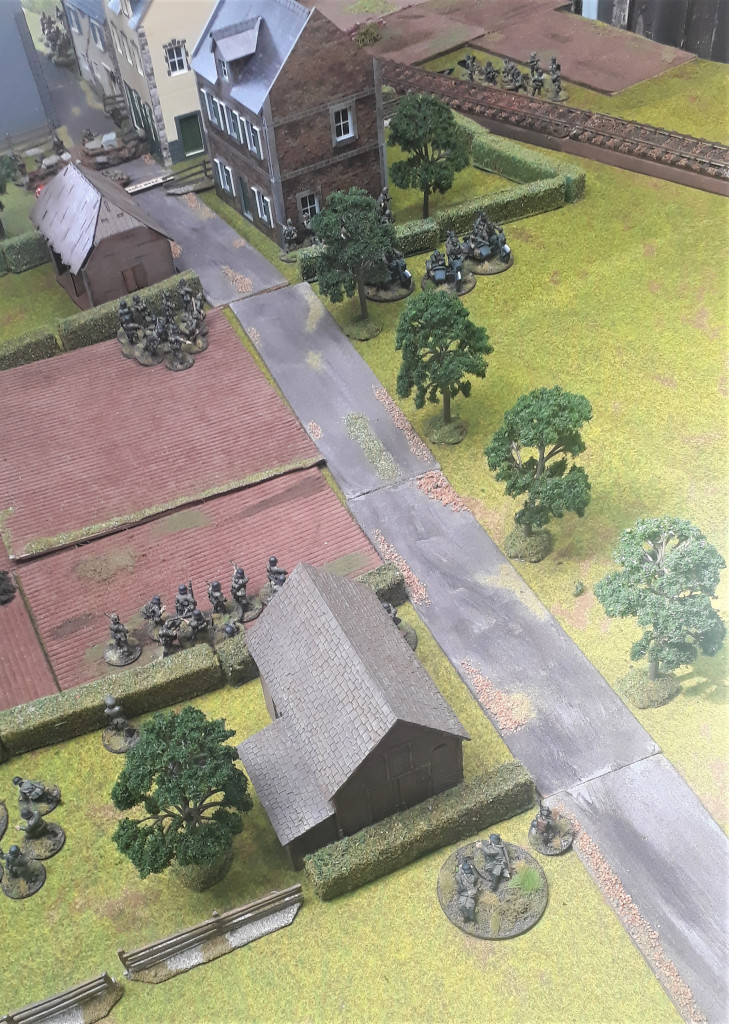 The French command seemed to hesitate – some rifle Grenades and Machine gun fire came from newly deployed troops to the rear and three of the German 75mm gun crew were out of action in one turn!

Undaunted the Gun NCO rallied his crew with the aid of the nearby Feldwebel, and they continued to pour shells into the foremost Frenchmen – who appeared to hug the bottom of their trench (now pinned.)

At that point the Leutnant arrived in the middle of the road waving his pistol and urging his men forwards from two sections in a combined attack (another double turn) the Germans hurled grenades and charged. Despite the LMG fire and the defences the pinned Frenchmen could only muster 10 dice to the Germans 24 and managed only 2 casualties to the Germans 9 – the French section ceased to exist and the Germans stormed into the trench (Well those that could fit – the other teams stood and waited to be run over by the R-35.) to await the French counter attack.

The French fired what weapons they could bring to bear on the advancing Germans but with little effect.
The Germans turn saw the victorious Leutnant and his men continue to advance, more grenades rained down on the French and the 75mm iG poured more shells into the small team of dismounted French Motorcycle troops they became pinned just as the swarms of Germans arrived.
Even the VB teams and a nearby infantry teams help was not enough as the French again scored 3 kills to the Germans 8 the two small teams were dispersed along with both their NCOS. 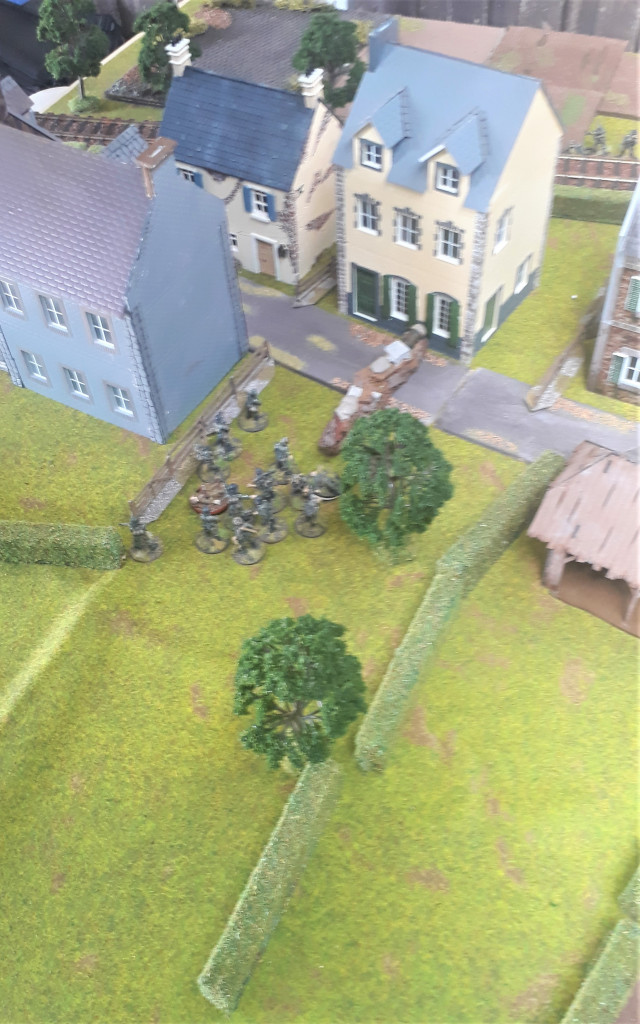 At this point with their moral at 2 the French decided to quit the field (next roll a 5,6?) .

So lessons learned:
Sometimes you do not need fancy toys when good old bayonets and grenades are handy.

When defending make sure some teams are not isolated or you have reserves to counter attack and the dice to do it.

For example the team under fire could have withdrawn into or behind a house before the assault – meant sacrificing some firing dice to do it but sometimes discretion is better than revenge.

To be fair my shooting and assault dice were very good, always at average or above. OTOH my opponents command dice were poor and his combat dice were worse!

When your dice are poor I think it is even more important to play conservatively and wait until your luck changes – do not give your opponent an easy target make him use all his dice just to get at you.

The Butchers Bill:
French – just about all of em – luckily he gets a fresh platoon for the next mission.

German lost 15 in total which is a lot but 8 of them were from other companies support troops and with the moral difference the Germans will be down only 2 men in the next mission. ( We took some of the returned due to moral on the support troops as we thought that was reasonable.)

Indeed when your luck is in push it to the max before the opposition can react... I guess thats German infantry Blitzkrieg

As you know I had terrible trouble with this one and Rich said that the design factors in the Germans taking 2-3 attempts, so will be interesting to see how you two progress and if it’s possible for the French to recover from the early loss.
The Tactical Painter https://thetacticalpainter.blogspot.com
Painting little soldiers for tactical battles on the table top
Top

MLB wrote: ↑
Sat Feb 29, 2020 10:05 pm
As you know I had terrible trouble with this one and Rich said that the design factors in the Germans taking 2-3 attempts, so will be interesting to see how you two progress and if it’s possible for the French to recover from the early loss.

Mission 3 the Germans get a lot of support and the terrain is good.

Missions 4 and 5 look tougher for the Germans.

Mission 6 is an interesting one , full on city fight.

I think the main lesson from mission 1 is " don't defend in the buildings!" It is too limiting.

Dig trenches in the gardens - strangely enough thats what they did in real life too!

Dig trenches in the gardens - strangely enough thats what they did in real life too!

Which is exactly what Dave did when we played it. I think the only team to ever occupy a building was the VB team. Wargamers have some deep urge to occupy buildings for some reason, not so soldiers.

Reading 'With the Jocks' and one thing I noticed was that whenever the platoon 'occupied' a farm the first thing they did was dig-in around the perimeter. These were the fighting positions. The buildings themselves were used as a command post and aid station. The only time the men occupied the buildings was to rest, sleep and eat. The moment there was a threat of action they all went outside into the foxholes or trenches.
The Tactical Painter https://thetacticalpainter.blogspot.com
Painting little soldiers for tactical battles on the table top
Top

One thing after this game I am thinking of doing is making the entrenchments better against HE.
(I realise my iG dice were hot but even so the trench should be better than hiding behind a brick wall?)

In other words not dropping a level - leaving it as hard cover.

In real life the slit trench was safe against anything but a direct hit.
Top