Both sides deployed their sections quickly aided by slick rolling of multiple 2s and 3s. The Japs putting their support in on their right while trying a ‘Coup de main’ in the centre with a section going hell for leather through the village. The Australians deployed their three sections evenly using the rice paddies ‘walls’ for protection and using the Vickers Team to virtually wipe out the Japs central thrust. The battle then pivoted around the Japs right. They advanced under a thick pall of smoke and launching a well-coordinated attack; a Flamethrower attack followed up with a charge into close combat saw the Japs smash the Aussie Section guarding the flank. But in their moment of glory a double phase allowed the central Section of Australians to redeploy push back the attackers with heavy losses and restore the situation. Excited with their success the Aussies pushed forward and were defeated the broken survivors retiring allowing a much-reduced Jap Section and their Ha Go Tank (!?) to achieve victory for them.

The mighty Japanese Type 94 Ha Go Tank, the Aussies ATR Team fired several shots at it but failed to score a hit! 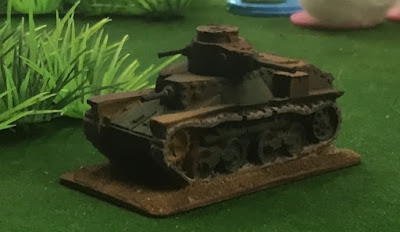 Link to the Blog report with more pictures...
https://toysoldiersforoldgits.blogspot. ... -japs.html

A couple of points we noted from playing this game;
1. Jap Sections can take a lot of punishment and keep moving on, in this game they started with 57 men and 31 became casualties but their Force Morale only drooped 3 from 11 to 8 (mind you their leaders seemed to lead a charmed life suffering only 2 light wounds despite the carnage around them).
2. We had an issue with working out how a Flamethrower Team defends itself in close combat and could find nothing quickly with a search online to resolve it grrrr...George did some research after the event and we’ll probably go with one of these two options next time;
The support crew fight and The flamethrower guy hides. He surrenders if his friends lose the fight.
Or
The whole team buggers off 3D6 and take 8 points of shock.
"There's nothing cushy about life in the Women's Auxiliary Balloon Corps!"

Nice AAR Capt
BTW p 68 referring to Engineer teams
If an enemy contacts them in Close
Combat they will surrender immediately.
Top

Good luck surrendering to anyone* with a flamethrower strapped to your back!

(* I was going to add "- even Bhuddists - ", but given their history of self-immolation.....)
No plan survives first contact with the dice.
Top

Yeah I reckon as the enemy approach you hand the flamethrower to your assistant with the words
"Hang on to this for a minute, I'm just going to the loo"
Top

The PSC AARs will be more comprehensive that this play through game.

Cheers!
"There's nothing cushy about life in the Women's Auxiliary Balloon Corps!"