Inspired by the Tactical Painter's fantastic tutorial on split-rail fences, I thought I'd share my recent experiences with building dry stone walls, a common feature found pretty much anywhere in the world where rocks are found in plentiful supply. Dry stone walls are so named because they do not contain any mortar, and are generally just loose stones (one or more courses wide) stacked on top of each other. These take various forms depending on the type of stone available, but I'll be working with ones made from more messy, irregular stone, like this:

For creating these, I took a page from the Terrain Tutor and stole some of my kid's Legos to build a mold: 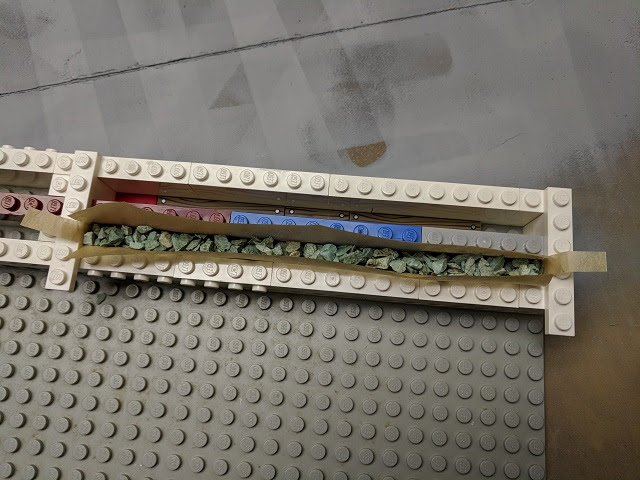 This mold was one lug wide and two blocks high (with a flat in the bottom to keep the lower surface flush and suitable for gluing to a base). My first try was three blocks high, but that turned out to be too tall for 28mm miniatures.

For the stones themselves, I bought a bottle of Xeolite crystals (used in fish-tanks) at the local pet store. They're a nice size and fairly rough/sharp, which looks good at scale - smooth stones look weird, especially when painted. They're also super cheap! The process here is to put some wax-paper in the mold, then pack in the stones mixed with PVA glue (thinned with a touch of water). I found that having the wax-paper stick up out of the mold by about a quarter inch was perfect, and that a shallow spoon was the ideal tool for scooping the stones into the mold and packing them down.

Let the whole thing dry overnight, then pull the resulting wall-bit out of the mold and gently peel off the wax paper: 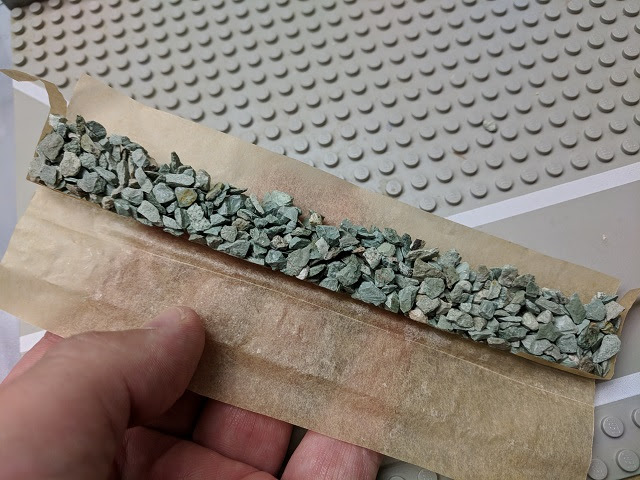 Voila! Dry stone walls! I then affixed them with super-glue to an MDF base that had been cut to length and had its edges beveled (with a Dremel drum sander attachment, very easy). I made four sections that are roughly 9" long and four more that are 6" long, giving me about 5 linear feet of wall sections - which is a pretty good amount to start with, I think.

Once mounted to the bases, I primed the walls and bases with gray automotive primer in a rattle-can (I'm an ardent Rustoleum man), then base-coated them with a nice Chocolate Brown (inexpensive Americana craft paint): 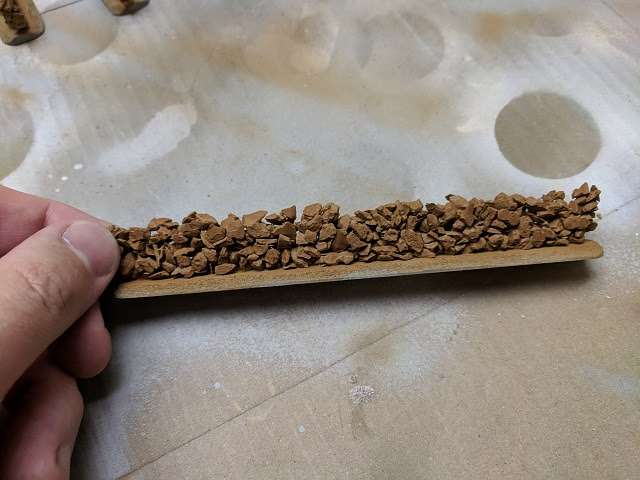 For my first go, I tried using a brush to do the base-coating, but it proved messy (because to thin the paint such that it will flow into the crevices, it tends to run out the other side of the wall). Casting about for alternatives, I found the airbrush to be a much more quick and effective way to get into all the resulting little nooks and crannies, although even with the airbrush you have to spray from a couple of different directions to get good coverage deep into the rocks. But honestly, this level of effort was probably over-kill - if it's too deep to reach easily, it's also probably too deep to see and not worth overly worrying about.

Once the base coating was done, I picked out a few stones here and there with either a dark gray or an olive green, just to give some visual interest. The resulting wall was then heavily dry-brushed with a medium tan and highlighted with a light dry-brush of an ivory-tan. This is a set of walls at each stage of the process shown together: 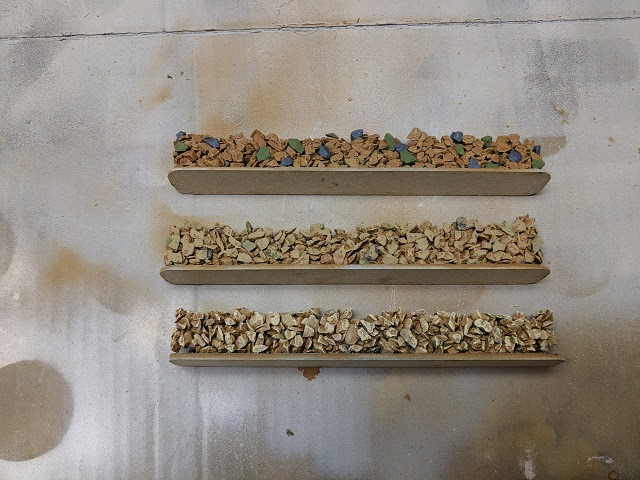 And here's what they look like under natural light when they're finished and based with natural sand: 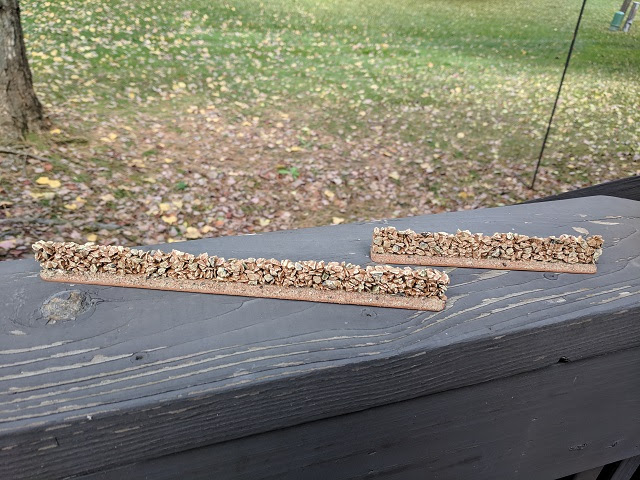 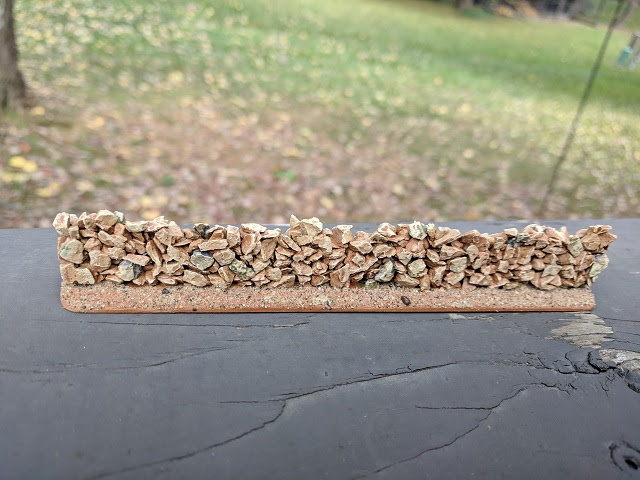 I'll likely attach a few little bushes or tufts of grass to them to give them a little bit more visual interest, but on the whole I am really happy with how they turned out.

This set was painted with North Africa and/or the Mediterranean in mind, and thus I chose colors that tended more towards the warmer tan tones. But if you wanted to go for a Northern European or New England board, basing the stones in a nice dark gray, picking out a few stones in green and brown, and dry-brushing with successively lighter grays would give you a similarly nice visual effect. Alternately, the Xeolite crystals I got have a nice blue-green hue and a fair amount of natural color variability - with a simple black or brown wash I'll bet they would look fantastic all on their own!

The beauty of this method is just how easy it was. And if you have a sufficient supply of Legos for building molds (and my kids have a ton of Legos), you can make large quantities of walls all in one go! This is definitely a method I'll be revisiting when it comes time to make stone walls for other theaters of conflict.
Top

It looks great! I once tried something similar,but without the grease free paper! I guess you can imagine the mess!
Top

They do look very good!
Top

They look very realistic......almost as if you had used real rocks!

One question with wood glue holding them together how do they hold up to rough wargamers handling or dropping?
Top

I've done the same. Nice job! The only thing I discovered is too much PVA and the stones are covered in a thick glue coating.. not good. So there is a balance of glue to stone mix.

As for rough handling, I found for my walls, once they have been painted and then sealed (I did a couple coats for this very reason) they hold up pretty well. They not been treated any more gentle than any other terrain piece and they are holding up well.
Top

Yeah, I've found them to be pretty durable so far. I dropped one of the 6" sections onto the table from a height of a little less than a foot I'd guess and it was fine. One they are painted and coated, they're pretty durable. You'll likely have a few small stones that were hanging on by a thread come off right after you pull them out of the mold, but otherwise they're fairly solid - to the point that cracking off a single stone you don't like the placement of can be a little difficult.
Top

I like that technique very much. I've tried building them up layer by layer, but it's slow, cumbersome and messy. The walls also lack a decent shape, which you've really achieved well here. My youngest has left his Lego years behind, but we haven't got rid of it yet, so I'll be raiding the tubs to see what I can find. Great tutorial, thanks.
The Tactical Painter https://thetacticalpainter.blogspot.com
Painting little soldiers for tactical battles on the table top
Top

So you mix the stones with the PVA in another cup and then put that into the mold?
Top

A technique I have used which is pretty simple but gets good results is to buy a bit of rectangular wood which is the height and shape you want the wall to be (in 15mm I have been using pieces about 15mm high by around 5mm which I get from Homebase and I think is called softwood stripwood). I cut it into sections, normally about 6" long and then stick to a lollypop stick with wood-glue. Once dry I cover it in wood-glue and then cover it in some small stone stuff I got in a pet shop - might be gerbil cage filling or something, but anything with stones the right side would work. Once dry I then give it a coat with watered down wood-glue to hold stones in place. Then just a matter of spraying and painting and flocking. It comes out great and is quick to do - I did around 20 or so feet of it and it took around 2 days, and most of that was waiting for glue to dry.

I did try mixing the stones with PVA and then spreading the resulting porridge on the wood, but found it very messy and took longer to dry, so being lazy and wanting a quick fix I ended up with just covering the wood with the wood-glue liberally and then just pouring the stone mix on top of the whole thing, and then adding a bit more if there were any patches that hadn't covered properly.
Top
Post Reply
30 posts