I'm really excited about this and I will be placing an order when I can do so.

I do have one concern regarding the cover. I'm not so keen on the skull design in the W because of its similarity to the symbol of one of the uglier, nastier units (3rd SS) of an ugly, nasty WW2 regime. Perhaps I am being overly sensitive but these days with how neo-Nazis are getting way too much publicity, but I'd rather not see one of their symbols on a game cover when it really doesn't need to be there. (If it had been done as a unit marker on the tank, at least there would be a context for it.) I realize that there's mockery involved here with the title but it still makes me a bit queasy.

Anyway, I've said my bit. I'll be quiet now and get my wallet ready.
My blog: http://littleleadwarriors.blogspot.ca/
Top

And a mockery reinforced by the TFL Pie & Pint divisional logo on the tank.
I am a bit put off by the skull & crossbones image too, but I'll leave that to Rich's judgement.
My wallet's ready too!

Erm boys the skull and crossbones is the panzerwaffe symbol long before the 3rd SS grabbed it. It is on the collar tabs of all panzer crew from 39 onward IIRC.
I also remember reading somewhere it came from the cavalry .....

Not to mention being the regimental badge of the 17th Light Dragoons, in commemoration of James Wolfe (and later the 17th/21st Lancers - aka the "Death or Glory" boys).
No plan survives first contact with the dice.
Top

I know there's a history that stretches far earlier than WW2, but this is a game set in WW2 so there is a much stronger connection to the 3rd SS than a 19th century cavalry unit.

And while that symbol or similar may have been worn by all panzer crews, the neo-Nazis are not celebrating panzer crews in general. They are commemorating a pretty vile set of low-lifes who chose this image as their division symbol. All I am saying is that given its history in WW2 and it's lack of graphic importance, I'd appreciate it if Rich considered removing that symbol.

Regardless, I'm still buying the rules.
My blog: http://littleleadwarriors.blogspot.ca/
Top

For those who don't know what's being talked about, Richard posted the picture below on Twitter along with the post


A sneak preview of something exciting. And it'll be with us before Easter. March in fact. 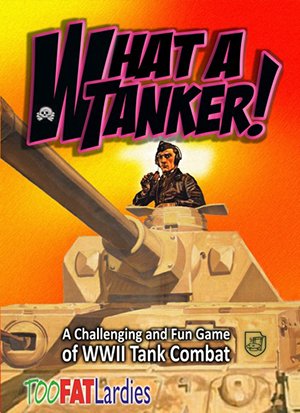 From a commercial point of view, I’d remove it - doesn’t really add to the design, could lose some sales (the humorous jibe at the SS will be lost on many) and you want people talking about the rules rather than the front cover.
Top

Inclined to agree. It doesn't need to be there. Either drop it or pick something else. If it was particularly relevant to the game is say leave it in, but it just seems a bit unnecessary.

Wasn't this discussed in the last podcast? Is Rich just having a cheeky little laugh to see if we're paying attention?
Tiny Hordes
Top

Personally I have no problem with it. Symbols have been hijacked and re-used all over history and I can't personally see the connection between what that symbol stood for in the past in that context and a game played with plastic tanks. This is a game and to be honest a bit of a tongue-in-cheek game at that so you can't convince me that this is subliminal NAZI propaganda and will have wargamers joining dodgy political and social groups in their droves.

Having set out my position I also want to point out that I do see where people are coming from that don't like it and I wouldn't fault the Lards for removing it to avoid this sort of debate altogether. Each to their own and luckily (or should I say through the efforts of brave people over many generations) we live in a country where different opinions can be voiced.

Either way my wallet is ready as it sounds great fun.
Top

Actually, it remains the regimental badge right up to today - and was worn by the current regiment's antecedents when they fought in WW2. In tanks.
No plan survives first contact with the dice.
Top
Post Reply
180 posts