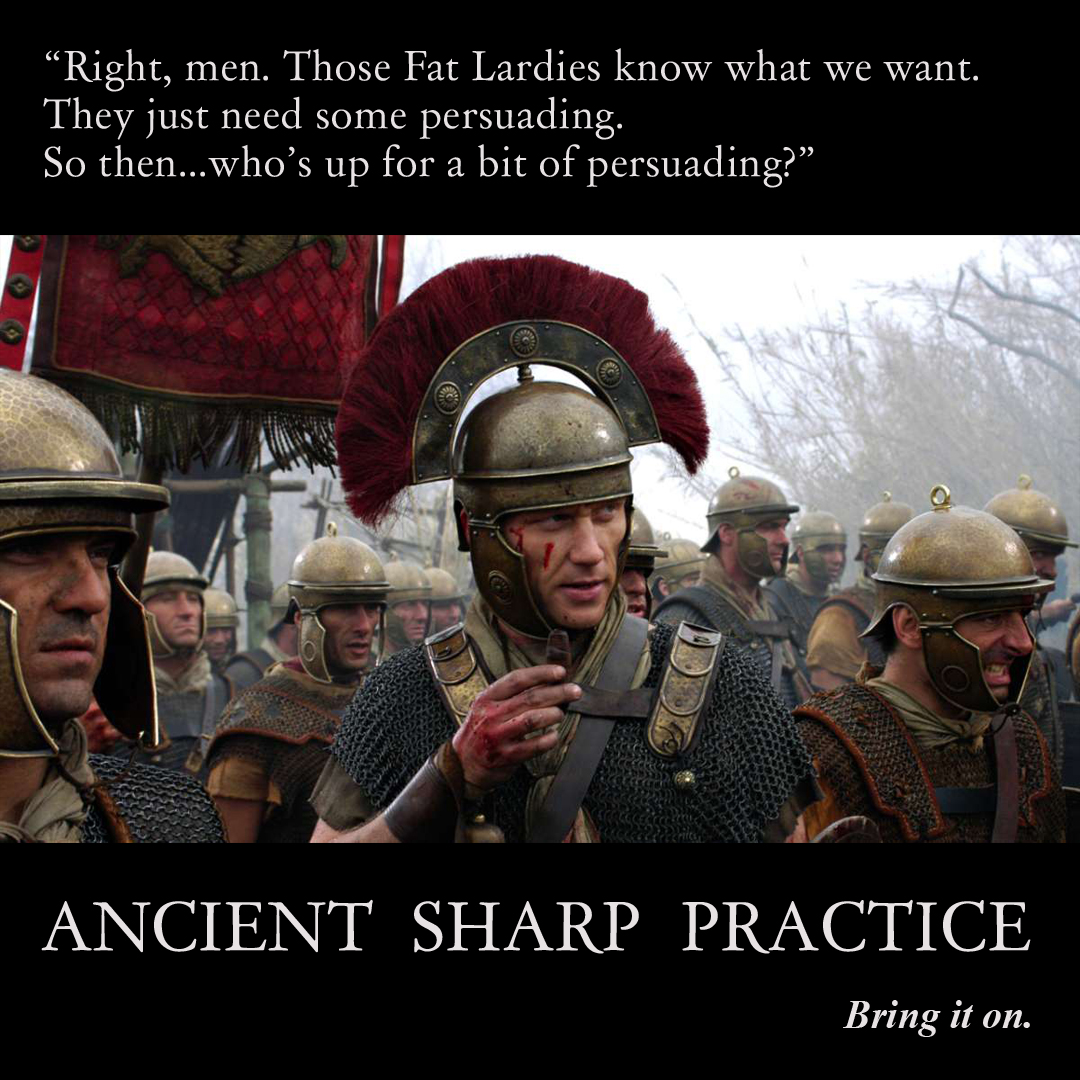 This is overdue.
Let's get this happening. Rich and Nick need to be told.
Register your support here. A simple "I'm in" will do if you'd buy a copy once they make it.

Excellent. We're underway. It all starts with 1, and then 2, and then 3...
Henry (Hyde) is also very keen for this to come to fruition, so he'll be posting the banner/message on his Facebook and Twitter.
The more folks register their interest for this, the more it's likely to seriously get the attention of Rich and Nick and not just 'bemuse' them. We want them thinking

Ancient Sharp Practice is RIGHT in so many ways for so many reasons it's hard to know where to begin. Having seen photos of that brilliant Romans vs Britons (Ancient Sharp Practice) game put on at The Other Partizan on the 18th August by John Savage, I couldn't stay quiet on this any longer. I recall the stream of logic thinking for Ancient Sharp Practice that occurred near the end of the Meeples & Miniatures episode 187 between Rich and the hosts of the podcast (Neil, Dave and Mike W) back in December 2016 when the release of Dawns & Departures for Sharp Practice 2 was being discussed. What was not to love? So if the drum for Ancient Sharp Practice needs banging, then let's bang it, hard and loud!
"When one goes, one must go with style."
Top

Count me in Please.

We have a small group that is happy to play test

What can I/We do to help?

Many thanks & Happy Gaming,

At this stage, I just want to let Rich and Nick know there's quite a few folks dead keen on this happening (soon). Anyone who has the ear of Rich or Nick, please get them comfortably relaxed with at least a pint of their preferred beverage, then bend their will towards the formulation and publication of Ancient Sharp Practice.

(I'm also wary that I may become the recipient of a Cease & Desist letter from Rich or Nick if they take a dislike to my drumming, so for now I'm just trying to show them how many folks really want the game.)

"When one goes, one must go with style."
Top

Dux B is as much a campaign system as a set of generic rules. I'd say that they would address different situations.
Top

Please don't do this, I have enough projects already...

Which is Wargamer-speak for "Yes, please, I'll buy that"...
Twitter @Staffan_G
Top

1. Nag nag nag. You are worse than my missus

2. I'm already on the case. For complete disclosure, I have been preparing for this for some time, to the extent of having forces painted and NEARLY ready to start playtesting. I have been mulling over how the rules would work for some time now and recent events have jabbed me to swing, Tarzan-like, into action. The chaps at the Harrogate Wargames Club have, unbeknown to me, been working on the same/similar project. As one would expect, we have trodden slightly different paths in terms of design ideas. So I am now trying to get toys on the table to start looking at their ideas, my ideas and really chucking it all into a pot to see what emerges. Metaphorically.

3. It certainly would not replace Dux. Indeed, I am keen to develop Dux further with a Heptarchy version.

Any questions, feel free to ask. But at present the answer will be "I don't know" until I get toys on table.